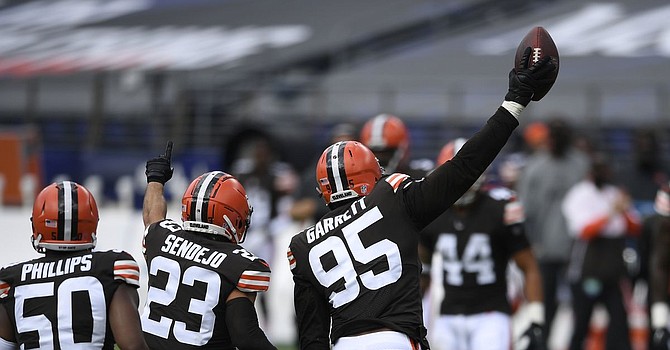 Myles Garrett is expected back on Friday after missing two days with non-Covid sickness. (Cleveland19)

The Browns’ fast action and adherence to intensive protocols apparently will enable them to get most of their self-isolated players back in time for Sunday’s game against the Eagles.

Long snapper Charley Hughlett was back on Thursday, as the Browns kept him out Wednesday for caution as his contact tracing was being completed.

The team is hopeful that right tackle Jack Conklin and kicker Cody Parkey, who were isolated because of high-risk contact with someone who tested positive, will test negative sufficiently to be back on Saturday.

Also, defensive end Myles Garrett, who missed the past two practices after feeling sick but did not test positive, could be back on Friday, according to coach Kevin Stefanski.

Still, the Browns have done better than most teams in keeping the virus from spreading. The Browns were implementing “intensive protocols” – meaning no team meetings indoors, Oakley face shields and masks at practice, and conservative distancing – before the league mandated it for all NFL teams this week.

“We’ve been doing it so long, it feels normal to us,” said defensive coordinator Joe Woods.

Steady as he goes

Parkey has been solid all year since taking over in Game 2 after Austin Seibert acquired the yips. He has done better than most kicking into the Bermuda Triangle of the Dawg Pound post and was unfazed in the last two gusty storms inside FirstEnergy Stadium, connecting on four of five field goals and PATs.

In eight games since replacing Seifert, Parkey is 11 of 12 on field goals and 23 of 24 on PATs – all the more impressive considering Parkey’s traumatic demise with the Chicago Bears.

In a 2018 playoff game against the Eagles, Parkey’s game-winning attempt from 43 yards missed when it bounced off the left upright and against the crossbar. Such a devastating miss could end a kicker’s career.

“I think he’s mentally tough guy and he doesn’t get too rattled,” Priefer said. “He’s very unlike me. I go up and down too much. Cody’s very steady. I think anything good that happens or anything less than perfect, he just rolls with it. I admire him for that and I admire him for the way he’s come back and especially the way he’s performed for us this year.”

On the other end of the spectrum, Priefer is showing patience and understanding with rookie returner Donovan Peoples-Jones, who has been shaky in even calm weather conditions. Peoples-Jones’ muff of a Houston kickoff at the Browns’ 3 could have spelled disaster for the offense, but Kareem Hunt and Nick Chubb bailed him out by moving the ball and preserving the 10-7 win.\

Priefer said, “Donovan’s a very smart player, but the thing about a rookie returner – I’m like the fans, I freak out too – but as a young player, you need experience. We do countless reps of punt return and kick return, catching punts, moving him around, putting him in different situations, just like the one he was in [against the Texans]. But the only way to get better at that stuff is to experience it. Yes, there are growing pains with a young returner. I feel the fans’ pain. I get it.”

The Browns used the pistol formation – quarterback about four yards behind center, with a running back behind him – twice on their first series against Houston. The formation, which can help the quarterback see the field better while still giving him a legit option to handoff, resulted in a 9-yard completion on a slant to Rashard Higgins and a 6-yard run by Chubb on successive plays.

Stefanski remarked, “There is a package of plays that you can run out of it, and we will kind of grow that and see if that becomes part of the game plan this week.”

But offensive coordinator Alex Van Pelt didn’t sound like he was a fan of the pistol.

“Just something you throw in there for window dressing, to be honest,” he dismissed. “Give them something to talk about, something to think about. Doesn’t have any purpose other than that.”

Center JC Tretter was back at practice after getting excused for personal reasons on Wednesday.