Mr. October: Myles Garrett's Afc Defensive Player Of The Month Honors May Be Just The Beginning Of His Accolades 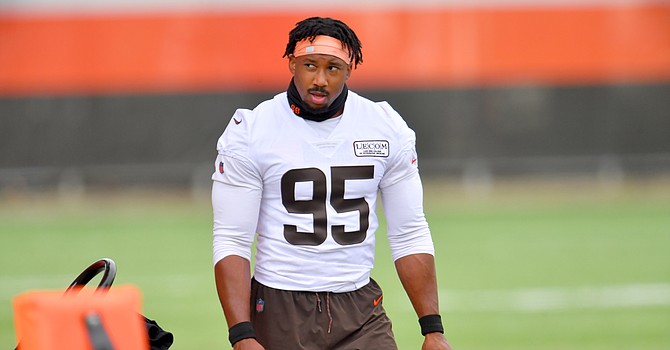 Myles Garrett is the Browns' Mr. October after being named AFC defensive player of the month. (Dawg Pound Daily)

Editor's note: Tony Grossi is a Cleveland analyst for TheLandOnDemand.com and 850 ESPN Cleveland.

Where would the Browns be without defensive end Myles Garrett?

Just look back to the final six games of last season when he served an NFL suspension for bopping Pittsburgh’s Mason Rudolph over the head with his helmet. The pass rush slipped from three sacks a game to 1.3, the defense gave up 27.5 points per game compared to 22.8 previously, and the team lost four of six games.

Garrett was named AFC defensive player of the month for October. Six of his NFL-high nine sacks and two of his four forced fumbles were recorded in October. He also earned two points on a safety in the Colts game by influencing an intentional grounding penalty by Philip Rivers in the end zone.

On a defense yielding more than 30 points and 380 yards a game, Garrett has been “a game-changer,” according to coach Kevin Stefanski.

Garrett has accounted for turnovers (plus the safety) in each of the Browns’ five wins.

Little wonder, then, that Garrett was given a second day off in a row with a minor ankle injury as a precaution. The Browns practiced outdoors on a very wet field on Thursday while Garrett worked with a trainer indoors. Stefanski said Garrett would be back on the field on Friday and he does not expect him to miss Sunday’s game against the Las Vegas Raiders.

“He knows that we are counting on [him],” Stefanski said. “He is a great football player, and we are going to need him for the rest of this season to continue to apply pressure to the Q. He is the straw that stirs the drink there.”

Guard Joel Bitonio said, “I think mentally he is on a mission. He has always been there, but I think with missing some games last year and being injured a couple of times, I think he wants to be on a mission to prove that he is the best pass rusher in the NFL.”

Garrett has nine sacks; the rest of the defense combined has nine. Garrett has more sacks than five teams, including the Raiders, who have seven.

Raiders coach Jon Gruden sounded in awe of Garrett on a Zoom call on Wednesday.

“Everybody counts sacks. That is like the only thing they count anymore is sacks,” Gruden said. “This guy forces fumbles. He causes other sacks for other people. He is good against the run. He bats passes down. His arms are up in the air. He forces inaccurate balls. He has a factor about him. His presence is felt a lot.

“He can play left end, right end or they can push him inside, and he is a factor wherever he plays.

Filling in for injured Nick Chubb as the No. 1 back, Kareem Hunt has played through groin and rib injuries and has slipped to eighth in NFL rushing with 463 yards – 200 behind leader Derrick Henry of Tennessee. But Hunt co-leads with eight others with seven touchdowns (three rushing, four receiving).

“That is my thing. I just like smelling the end zone,” Hunt said. “If I get an opportunity to make a play in the end zone or close to the end zone, I am definitely going to try to fight my way in there, make the nice catch or whatever it is to get in the end zone. That is just because of the team needs. I would rather have seven points than three any day of the week.”