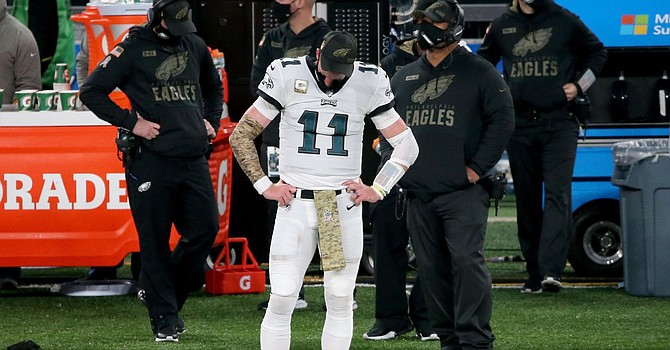 1.How did the Eagles devolve from preseason Super Bowl contender to a team struggling to reach .500? Reason 1: Injuries to the offensive line, receivers and tight ends. Reason 2: Inconsistent play by quarterback Carson Wentz. Now that those injured position groups have been reasonably returned to normalcy (save for the guard positions and tight end Zach Ertz), the question perplexing all of Philadelphia is: What the heck has happened to Wentz?

2.The main player in the 2016 mega-trade with the Browns (see below), Wentz is on pace to shatter career lows in relevant categories such as completion percentage (58.2), yards-per-attempt (6.1), interceptions and passer rating (73.1). His 12 interceptions lead the NFL and he also has three fumbles (one lost). Wentz’s decision-making and mechanics breakdowns have baffled the Eagles. He’s held the ball too long and made bad throwing decisions not seen even in his rookie season. Wentz is on pace to running with the ball more than in any season and already has scored a career-high five touchdowns. Yet he and the Eagles have been hesitant to run throwing plays out of the pocket. The Eagles shocked a lot of people by taking Alabama-turned-Oklahoma mobile quarterback Jalen Hurts in the second round of the 2020 draft. The team has been reluctant to incorporate a package of plays for Hurts, but some believe that Wentz's exasperating play may change that soon.

3.Now that injured players have returned, Wentz is not lacking for playmakers. With receivers DeSean Jackson and Alshon Jeffery missing 13 games combined, practice squad revelation Travis Fulgham (30 catches, four TDs) and converted University of Houston quarterback Greg Ward (37 and three) stepped up. Now they’re looking to get a spark from No. 1 pick Jalen Reagor, who’s been back for two games after missing five with a thumb injury. Wentz hasn’t had stud tight ends Zach Ertz and Dallas Goedert available together since the third game. Goedert is back from multiple leg injuries; Ertz (high ankle sprain) was designated for return from IR, but his status for Sunday is uncertain. As a tandem, running back Miles Sanders and 5-6 scatback Boston Scott average 5.6 yards per rush.

4.The strength of the Eagles is their defensive front of starters Derek Barnett, Javon Hargrave, Fletcher Cox and Brandon Graham, and backups Josh Sweat and Vinny Curry. The linemen have registered 21.5 of the team’s 31 sacks (tied for third).

1.The Eagles drafted Wentz No. 2 overall in 2016 after a mega-trade with the Browns engineered by the Paul DePodesta-Sashi Brown-Andrew Berry regime. The original trade grew into eight trades over the span of three drafts and two general managers. The Browns eventually acquired 13 players in the transactions. The only player left from that haul is cornerback Denzel Ward. (Note: Jabril Peppers was one of the players drafted with picks associated with the original Wentz trade, and Peppers subsequently was included in the trade for Odell Beckham Jr., who is out for the year with an ACL injury.)

2.Pederson’s coaching debut and Wentz’s NFL playing debut came at the expense of the Browns in the 2016 season opener. Wentz threw for 278 yards and two touchdowns in a 29-10 Eagles win.

3.When the Eagles won the Super Bowl in 2017, Pederson’s offensive coordinator was Frank Reich (now Colts head coach) and his quarterbacks coach was John DeFilippo (now with the Bears). After two seasons with Mike Groh as coordinator, Pederson tried to invigorate a stale offense by assembling a new offensive staff that includes senior offensive assistant Rich Scangarello, senior offensive consultant Marty Mornhinweg, passing game coordinator Press Taylor, assistant head coach Duce Staley, and pass game analyst Andrew Breiner. All the while, Pederson remains his own play-caller. Those are a lot of chefs cooking up an offensive stew and the result has been a tasteless mish-mash. Which might help explain the demise of Wentz, who only has two ears for all those voices.

4.Playing through an inordinate number of injuries to key players, the Eagles slogged through a tough early schedule. They tied the Bengals, were within one score of the Steelers until late in the game, and lost by two to the Ravens. At 3-5-1, they’re holding first place in the weak NFC East. But their next five games are against the Browns (6-3), Seahawks (6-3), Saints (7-2), Packers (7-2) and Cardinals (6-3) before closing against division foes Dallas and Washington.

Small world: Doug Pederson played quarterback for the Browns in 2000. He was 1-7 in games he started … Defensive coordinator Jim Schwartz began his NFL career as a Browns scout from 1993-95 … Linebackers coach Ken Flajole (2013) and safeties coach Tim Hauck (2012) coached with the Browns … Center Jason Kelce is a native of Cleveland Heights … Defensive end Genard Avery (injured reserve) was a Browns fifth-round pick in 2018 and was traded to the Eagles in 2019.