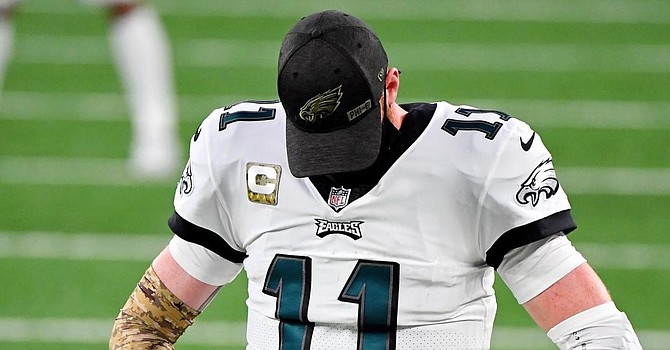 If Eagles QB Carson Wentz picks his head up, he'll see Myles Garrett is missing from the Browns pass rush. The Eagles wonder if that's enough to pick his game up, too. (CBS Sports)

The Eagles are desperate. Clinging to a 1 ½-game lead in the comically inept NFC East, their days of sleepwalking to the division’s marred title and home playoff berth are over. This is their best chance of winning in a gauntlet that follows with Seattle, Green Bay, New Orleans and Arizona. You think it’s embarrassing to win a division with a sub-.500 record? Much worse is finishing second to the team that wins it with a sub-.500 record. A loss to the Browns doesn’t knock the Eagles out of first; second-place New York is on a bye. But it would crush their hopes of coalescing in time to salvage the division. The Browns, meanwhile, lost DPOY-candidate Myles Garrett to Covid-19 this week. Garrett not only leads the NFL with 9 ½ sacks and four fumbles, he has made a game-changing play in each of the Browns’ six close wins. He is among a handful of NFL players who are irreplaceable on their teams. There’s Patrick Mahomes, Aaron Rodgers, Russell Wilson … and Garrett. When Garrett was suspended six games last year, the defense went into the tank and dragged the whole team with it. Of all the obstacles faced by first-year coach Kevin Stefanski, Garrett’s absence may be the most adverse. What happens next could be either Stefanski’s greatest triumph or the beginning of the end.

Second down: Take the ball and score.

For the third game in a row, FirstEnergy Stadium will be ravaged by challenging weather conditions. The gale-force winds finally have blown away, but there is a 100 percent chance of rain the entire game. A soaked grass field typically neuters pass rushers – which might neutralize the loss of Garrett, come to think of it – and gives advantage to ball-carriers, who know where they’re going against defenders who have to react on slippery footing. Throwing under a steady rain is perilous, however. So it could shape up as another day that plays to the Browns’ strength – their powerful running game. The Eagles know that, of course, and also know that most coaches are loathe to run the ball when behind on the scoreboard. Thus, the team that scores first could command the flow of the game. Both organizations live and die with analytics, so it will be interesting to see which team bows to that side of the building and defers the opening kickoff.

Every franchise has its list of epic quarterback draft decisions it lives to regret. The key is overcoming them. Part of overcoming them is ultimately defeating the quarterback on the field. The Browns have never been able to overcome the snub of Ben Roethlisberger in the 2004 draft. The Steelers quarterback has posted a haunting, 24-2-1 record against them. The Browns had the opportunity last week to finally defeat DeShaun Watson, whom they snubbed in the 2017 draft by trading the No. 12 pick to the Texans. Watson had been 2-0 against the Browns until last week’s 10-7 loss. Now comes Carson Wentz of the Eagles, who makes his first appearance in Cleveland as an NFL quarterback. Wentz’s pro day was totally overseen by then-Browns coach Hue Jackson in the spring of 2016. Then the big North Dakota State passer was hand-delivered to the Eagles when the Browns traded them the No. 2 pick a week before the 2016 draft. Coincidentally, Wentz debuted with a resounding 29-10 victory over the Browns in the 2016 season opener – his only game against them until now. Wentz was an MVP candidate his second season, going 11-2, until a knee injury sidelined him during the Eagles’ run to the Super Bowl championship. Now in his fifth year, Wentz has fallen on hard times, inexplicably making mental and physical errors that have imperiled his team’s playoff chase. For the second week in a row, the Browns have an opportunity to bust a draft-day ghost. You take them any way you can get them.

Without question, the weak spots of both teams are at linebacker. It’s no coincidence both organizations devalue the position, per analytics recommendations. The Eagles have done it under GM Howie Roseman for years. Browns GM Andrew Berry worked under Roseman last year and has adopted the same philosophy. In general, the theory is to devote the bulk of defensive cap money to the pass rush and secondary and patch the linebackers with athletic, fast and cheap young players taken in middle rounds of the draft. If they develop into fine players by their fourth season, they are allowed to leave in free agency. Rinse and repeat. What happens is smart offensive coordinators see the holes created and exploit them. So the offense that attacks the middle of the field here should be successful.