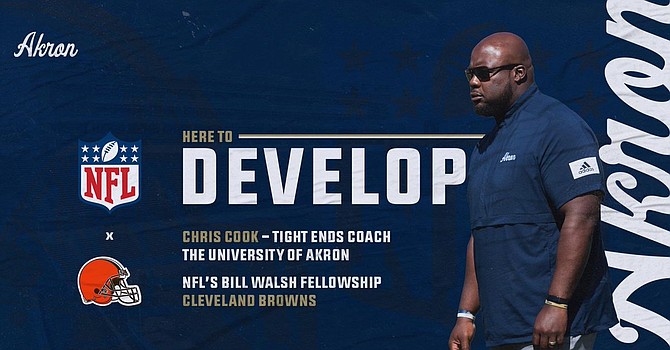 Already recognized as one of the more progressive organizations in the NFL, the Browns added to their record of promoting diversity and inclusion Tuesday when they admitted six coaches via the Bill Walsh Diversity Coaching Fellowship.

The coaches come from various levels and include two women.

The Walsh Fellowship has become a successful feeder system for minorities to gain access and experience and cultivate professional contacts with NFL teams.

Callie Brownson participated in the Walsh Fellowship last year with Buffalo. On Jan. 31, she was hired by coach Kevin Stefanski as chief of staff, a do-it-all position through which Stefanski broke into the NFL under former Minnesota Vikings head coach Brad Childress.

“Diversity is always going to be an important component of what we do in our organization because it helps us become a better organization,” Stefanski said in a statement released by the club.

While protests against racial injustice have gripped the nation, the NFL has been increasingly criticized for a poor record of hiring minority coaches and executives. All the while, the Browns have been a vanguard in promoting diversity and inclusion in their football organization.

In 2016, they were the only team to have a black head coach, two black coordinators, a black general manager and a black vice president of player personnel.

In January, Andrew Berry, who was VP of player personnel under GM Sashi Brown in 2016, was named Browns executive vice president of football operations and general manager. He is one of two blacks currently holding the top football position with an NFL club.

At his introduction on Feb. 5, Berry said, “I believe success in the NFL comes from good people, and good people come from all walks of life. It is for that reason that we are going to be very deliberate in pushing diversity across football operations because it leads to success, and I know that I have been the benefactor of people looking beyond my age and my race throughout every phase of my career. The thing is diversity in the NFL transcends race, age and gender. Diversity of experience and diversity of thought are just as important.”

The six coaches joining for the remainder of the offseason program through the Walsh Fellowship are:

*Chris Cook, tight ends coach at the University of Akron. He was a Walsh Fellow two times with the Atlanta Falcons.

*Angela Baker, a player on the Pittsburgh Passion, a women’s professional football league, for eight seasons. She participated in the women’s training camp with the Pittsburgh Steelers the past three years.

*Leonard Hankerson, wide receivers coach at Stephen F. Austin. He was a receiver with the Washington Redskins from 2011-14 and three other teams in 2015.

*Ashton Grant, quality control coach at the College of the Holy Cross. He played in the Alliance of American Football with the Salt Lake Stallions and also participated in NFL training camps with the Chiefs, Bears and Raiders.

*Elena Grigelevich, a coaching analyst at Bryant University who is also pursuing a master’s degree.

“There are some really good football coaches in the NFL that are here after their first exposure came as a Walsh Fellow and we are pleased to have six fellows join us this summer,” Stefanski said. “This will be a great experience for our fellows, learning is an important part of this program and our coaching staff will be good resources for them.”