#Heytony: Will Jimmy Haslam Give Josh Mcdaniels The Keys To The Castle? 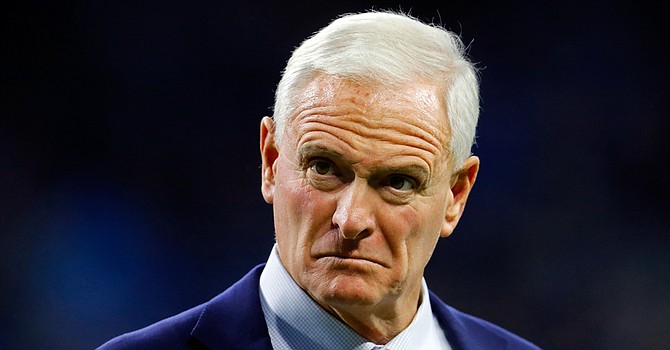 Browns owner Jimmy Haslam may have to choose between Josh McDaniels and "the process" set forth by Paul DePodesta. (Transport Topics)

Hey Tony: What are the odds that Jimmy Haslam will completely let Josh McDaniels revamp the entire front office? Does he like McDaniels that much?

Hey Joe: The answer to this question and others will decide the coaching search. For instance, does Haslam choose McDaniels over another candidate (Kevin Stefanski?) recommended by Paul DePodesta, chief strategy officer and point man of the search committee? Does Haslam follow the “process” set forth by DePodesta, or does he stray – as he has so many times before – and go with his gut selection? If McDaniels has demands that differ from the “alignment” outlined by DePodesta, does Haslam cave and give McDaniels what he wants? If so, it may signal the end of DePodesta’s time in the organization. Sources have told me that Haslam would accede to McDaniels’ demands. We shall see soon enough.

Hey Tony: Silly question but, with the GM position open, wouldn’t it be awesome if they could coax Ozzie Newsome out of retirement? Thanks General!

Hey Chris: My “dream team” Browns organization always has been Bill Cowher as coach and Newsome as GM. Alas, it will never happen. Even though both are unattached and available, neither wants to step back into the rat race. Cowher told me a few years ago he left the Steelers for a “lifestyle” change, not a team change. And Newsome told me he would not work full time after stepping down as Ravens GM. We can only “dream” about what they may have accomplished together.

Hey Tony: Mike Vrabel, Bill Belichick, Pete Carroll, Sean McDermott, Mike Zimmer, and John Harbaugh all playoff coaches. All defensive coaches except Harbaugh (ST). Why the fuss about offense, when a leader is needed as HC?

Hey Jamie: So that means six of the 12 playoff teams were led by offensive coaches. The year before, nine of the 12 playoff teams had offensive coaches. Nothing is conclusive about those samples. I used to favor an offensive-minded coach. Now I believe it doesn’t matter. You’re right, the makeup of the coach is what matters – not his expertise. I’m more open-minded than ever in giving an experienced special teams coordinator the chance as head coach. For that reason, I’m really interested in following the progress of new Giants coach Joe Judge.

Hey Tony: Can the Browns officially announce a hire of a HC still in playoffs? Without the press conference, of course. Or do they have to wait until that team’s season ends for any type of official word from the team?

Hey Mike: I submit the following NFL regulations concerning the pursuit of assistant coaches with clubs involved in the NFL playoffs:

-- No contract shall be executed, and no agreement to execute a contract, or an announcement of a contract or of an agreement for employment, shall be permitted until after the conclusion of the employer club’s playing season.

Hey Tony: Are there any examples of immature QBs getting it together and having successful careers after a rocky year or two? I’m concerned that Baker is trending the wrong direction in this regard.

Hey Tony: Brett Favre was a tad immature in his early years, and developed into a Hall of Famer. But Favre received good coaching from Mike Holmgren in his formative years. That is so essential right now to steer Mayfield back on track.

Hey Tony: Would Clay Matthews be a strong Seniors Committee candidate for enshrinement in Canton in the future?

Hey Leslie: Clay is a strong modern era candidate and should be in the Pro Football Hall of Fame by now. I really thought this would be the year for him but he failed to be advanced, once again, in the cutdown from 25 to 15. He has a few more years of modern era eligibility. Once that expires, he falls into the purgatory of senior candidates and the odds are reduced substantially because only one or two senior candidates (in alternate years) are advanced to the finalist round each year, as opposed to five modern era candidates.

Hey Tony: Did the Browns save money by not having to pay Myles Garrett due to his suspension? And when might we hear when that suspension is lifted?

Hey DJ: Garrett’s total fines for clubbing Mason Rudolph with his helmet came to $1,185,535. That figure is comprised of $45,623 for roughing the passer and $1,139,112 in six game checks forfeited in his suspension. The money comes out of Garrett’s pocket. The Browns have to pay Garrett his scheduled compensation and the fine amount is deducted. Per the CBA, fine money goes to NFL Player Care Foundation and the Gene Upshaw Players Association’s Players Assistance Trust. Garrett’s suspension will be lifted after he meets with Commissioner Roger Goodell. That probably won’t happen until after the Super Bowl.

Hey Tony: The upcoming draft is top-heavy with OL, and the best of the bunch could be gone before the Browns select at No. 10. Any chance they could move up to fill this glaring need?

Hey Vern: These draft questions will depend, of course, on the new men making those decisions – the GM and head coach. We can only speculate at this time, but I would doubt a trade-up for an offensive tackle is in the offing.

Hey Tony: How come the Browns continue to struggle with things that other organizations make look easy?

Hey Mike: It all flows from the top.

Hey Tony: Any idea when the new jerseys will be revealed?

Hey Kevin: Last time it was just before the draft. I don’t think a “reveal” date has been set, but I would clear your calendar in April. May depend on Odell Beckham Jr.’s travel schedule.