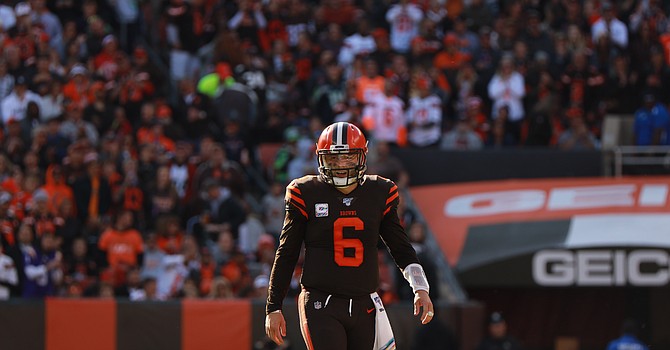 Baker Mayfield's third season will be a critical one for him and his future with the Browns. (Rob Lorenzo)

Last in a series.

We’re previewing each Browns position group to set up yet another important offseason for the franchise with the longest playoff drought in the NFL.

Officially he is Kevin Stefanski’s offensive coordinator, but he will also double as quarterback coach without the title. “My plan is to be the voice in the [quarterback] room,” he said. “I think that is very important. One of my strengths as a coach is coaching the quarterback, so I definitely want to make that part of my job responsibilities.” After playing 11 years, mostly as a backup quarterback with the Buffalo Bills, Van Pelt coached quarterbacks with Buffalo, Tampa Bay, Green Bay and Cincinnati. Stefanski never worked with him but chose him to help install his offense and preside over the reclamation of Baker Mayfield. Ultimately, he may also double as Stefanski’s play-caller, but that won’t be determined until the preseason.

More than any player, the latest organizational blow-up by Jimmy Haslam rocked Mayfield’s world. His comfy inner circle was blown to bits. Casualties: GM John Dorsey, head coach Freddie Kitchens, quarterback coach Ryan Lindley, offensive assistant Tyler Tettleton, veteran backup Drew Stanton. Survivor: Only Garrett Gilbert, one of Mayfield’s boyhood friends. Stefanski and Van Pelt are charged with deprogramming Mayfield from the bad habits he acquired in a miserable second season, installing an offense to make him better, and making the game fun again for him. What’s at stake? Mayfield’s third year will be critical in setting up his future as Browns franchise quarterback or draft bust. He will be eligible for a contract extension after the 2020 season, his third year. Prior to their fourth seasons, the Rams’ Jared Goff received a new deal for $134 million ($57 million guaranteed) and Philadelphia’s Carson Wentz got $128m ($66 million guaranteed). The difference: Both 2016 draftees took their teams to the Super Bowl within their third year.

The expected departure of Stanton creates a void for a proven veteran who can impart his wisdom on Mayfield, help mature him and also push him on the field and win a game if necessary. The obvious target would be Case Keenum, who had his best year by far in 2017 with the Vikings while Stefanski was quarterback coach and also played under Browns offensive line coach Bill Callahan last season in Washington when Callahan relieved Jay Gruden as interim coach. This is a no-brainer free agent target for the Browns.