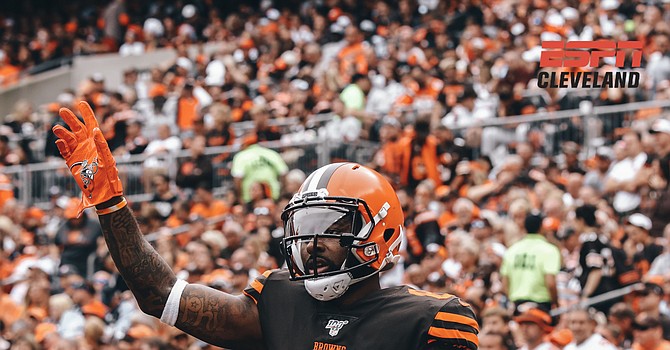 That narrative about the Browns being unimaginative if not dysfunctonal on offense, about the head coach being in over his head, about the brash quarterback stirring up the noise and then listening to it, about a Season of Great Expectations already on the rocks?

In one historic afternoon, the Browns erased increasing doubts about how good they could be and put their season back on track with a 40-25 beat-down of the Baltimore Ravens.

It was the biggest Browns win over the Ravens in style and substance since Art Modell stole away Cleveland’s old team for the money to stave off personal bankruptcy in 1996.

This was only the Browns’ 11th triumph over the Ravens in 41 meetings – only their fifth in Baltimore -- and it was easily their largest margin of victory. The score was made deceptively closer by a Baltimore touchdown in the final minute with most of M&T Stadium deserted.

The Browns left the Giant Crabcake with the same 2-2 record as the Ravens, but climbed to first in the AFC North with a victory in the first division game of the season. It marked the first time the Browns began a season 2-0 on the road since 1994.

“We beat them at their own game,” said defensive tackle Devaroe Lawrence. “They’re supposed to be the most physical team. Well, that’s our standard every day and we met our standard today.”

They were physical on offense and defense. Earlier in the work week, coach Freddie Kitchens marveled that the Ravens “play the game the way it’s supposed to be played.” On Sunday, the Browns played that way.

On offense, they rolled up 530 total yards by being creative yet patient, by trusting in Nick Chubb (165 yards, three touchdowns), by having Baker Mayfield distribute the ball quicker again, by getting the ball to Jarvis Landry (eight receptions for 167 yards) on a day Odell Beckham Jr. was bottled up, by rediscovering a jumbo formation, and by having tight end Ricky Seals-Jones (three receptions, 82 yards, one TD) do a David Njoku impersonation.

On defense, the Browns forced Baltimore’s first three turnovers of the season, two coming on Lamar Jackson interceptions and one on a fumble by physical runner Mark Ingram. They sacked Jackson four times and limited him to 66 yards running.

“We caged him in the middle. That was the gameplan,” said tackle Larry Ogunjobi.

Safety Jermaine Whitehead had one terrific interception soaring over tight end Mark Andrews at the goal line and caused another when he hit Jackson’s arm when he threw and the ball fluttered to Lawrence like a leaf on an autumn day. Whitehead also forced the Ingram fumble with a hit on the ball, which was recovered by end Chad Thomas.

“It was a great game all-around,” said end Myles Garrett.

It’s amazing the Browns produced such a complete game with relatively minimal statistical contributions from Garrett (one tackle) and receiver Beckham (two late catches on seven targets for 20 yards, plus one ugly physical scuffle with Ravens cornerback Marlon Humphrey).

It speaks to the completeness of the team the Browns aspire to be.

At the heart of this win were Chubb, Landry and Mayfield.

Chubb regained a lead for the Browns for the third time in the third quarter with a determined 14-yard run on which he made four Ravens defenders miss tackles. His 2-yard run behind a jumbo formation with Justin McCray lined up as a tackle-eligible and tight end Pharaoh Brown as a lead blocker increased it to 24-10.

And when the Ravens scored a touchdown and two-point conversion to draw within, 24-18, Chubb broke their backs and sent the disgusted crowd to the exits with an 88-yard touchdown, on which he cut through a swath created by center JC Tretter and right guard Eric Kush pulling to the right and turning on the jets.

“It was energizing for the whole team, hearing their fans booing and leaving the stadium,” Whitehead said.

Chubb said he was a little more determined today to “finish” his runs.

“I wasn’t going to let anyone tackle me,” he said. “Honestly, I had nightmares last week when I got down on fourth-and-9 because of a one-man tackle. That kind of drove me this week.”

That controversial fourth-and-9 play-call put Kitchens and Mayfield in the crosshairs of national and local criticism. That play was a metaphor of Kitchens’ inexperience in the duel role of head coach and play-caller, and it also symbolized Mayfield seemingly losing his grip on the offensive reins.

Rebounding after three substandard games, Mayfield was decisive, quick and mostly accurate (20 of 30, 342 yards, one TD, one interception, 102.4) in outplaying Jackson in their second career meeting and avenging last year’s 26-24 defeat here.

“I played better,” Mayfield said when asked if the play-calling seemed different. “When the quarterback sucks, it’s got to be pretty hard to call plays.”

For his part, Kitchens gave the players all the credit for the signature win of his brief coaching tenure – just as he took all the blame a week ago for the 20-14 loss to the Rams.

“Our guys played well,” he said. “The credit needs to go those guys. It wasn’t the play-calls. It was the players.”

The only negative was Landry suffered a concussion, presumably on his last catch-and-run, taking a Mayfield shovel pass 29 yards to set up Chubb’s 2-yard run.

It was Landry who set the theme for the week by announcing, “We’re going to be a great team.” Later, he said the tough loss to the Rams could be a game to turn around the whole season.

“Who knows?” Kitchens said. “But I do know this, if you keep your head down and keep working, usually good things happen. You turn the corner.”

And change the narrative.