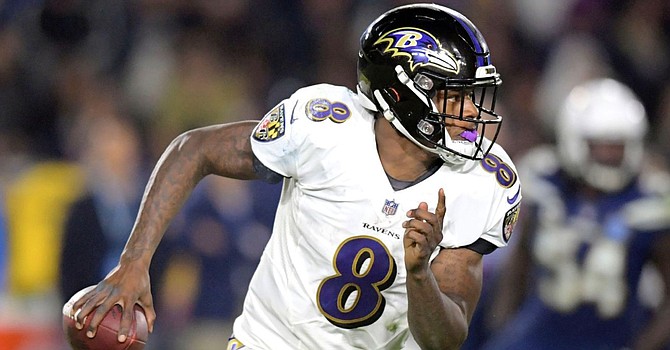 Lamar Jackson continues his Heisman winning-ways in the NFL

The merger of Jackson and Roman in Jackson’s second season has resulted in 14 touchdowns and 110 points in three games. The Browns have five and 49.

Jackson, the Heisman Trophy winner the year before Baker Mayfield, is on pace for 4,602 passing yards and 917 rushing.

“Definitely one of the best dual-threat quarterbacks that I have seen since Michael Vick,” said safety Damarious Randall.

“Playing Madden,” he said with a straight face.

“This guy is extremely dynamic, can make plays when you don’t think there are plays there to be made. [He’s] Houdini, I guess. Phenomenal. Not just with his legs, but his ability to get the ball down the field, as well. One of the great things he’s done when he gets outside the pocket, his eyes are looking downfield not just to run.”

“You can’t relax,” Wilks said. “It’s very pertinent with this guy. When you think he’s down, when you think you’re in position, all of a sudden he makes a move and he’s in open space. It’s very hard to simulate in practice.”

Jackson took the Ravens to the playoffs last year, winning six of seven starts, mostly on his legs. In a 26-24 win over the Browns in Game 16 in Baltimore, he passed for 179 yards and ran for 90 and two touchdowns.

Now Jackon’s game has been expanded by Roman, who was elevated to offensive coordinator.

On Thursday, Landry expanded on his thoughts – and all Browns fans should listen to what he says.

“It’s about adversity,” Landry said. “It’s about running together and not away from each other. I think this team has that. Has it been tough to figure out what’s been the problem? Yes, it has been. But there are guys working around the clock to make sure that we’re putting guys in the right position to make plays and make sure we play effectively and fast.

“Last week was promising, in a sense. It showed us a lot about our team. We had a lot of guys out and guys playing out of position and still making plays.

“I just think the emotions of how that game ended and having four opportunities from the 4-yard line and not getting it done … I think that’s discouraging for anybody. But I think as a team we’ve been in situations like this last year and I think we learned about ourselves in those moments. And this was a moment, I kind of took a step back and felt this was one of those things that can catapult us to something new. I think that’s why I mentioned it to [Kitchens].”

And what was the disappointed coach’s reaction?

He also could have been credited with the tackle of Burris, as they accidentally collided, perhaps costing a Pick 6 and go-ahead touchdown.

“I was just trying to be a highway cone,” Schobert said. “I thought if I just stand here, he’ll be able to avoid me. If I moved, I’d probably be in his way. Obviously, it was the wrong place to stand. I don’t know what else I should have done. Maybe just lay down and he could’ve jumped over me.”

So when Kitchens talks about the Browns being “this close” to winning, this was one example. Schobert felt it should have been a 72-yard TD return.

“The way it was setting up, the DBs and D-line had started setting up the wall and there was a lot of open space. But he ran into me so I don’t know if he would have found the seam,” Schobert said.

Right tackle Chris Hubbard (foot) advanced to “limited” on the injury report, which is progress, but Kitchens wasn’t sure about his game status for Sunday. So it may be another game of playing with fire for the Browns, using converted guard Justin McCray at right tackle with no natural tackle on hand if an injury would occur. “We kind of are, but that is the reason the position is so critical,” Kitchen said. “We have got a plan for it if anything happens.”