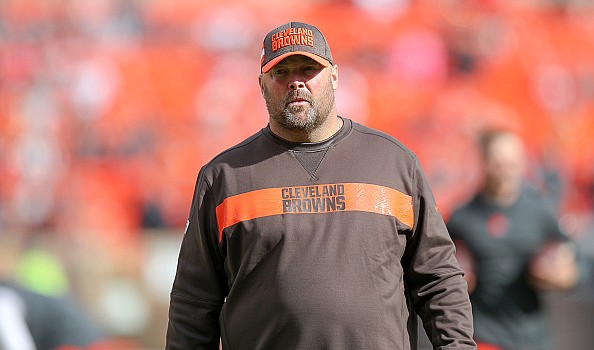 Freddie Kitchens continues to learn how to balance HC with OC duties on gameday.

If the Browns hope to meet their own expectations in this era of offensive football, they’d better fix their offense fast.

They failed to make the plays on offense with the game in their hands and wasted a tremendous defensive effort that produced three takeaways despite missing five starters.

He had taken them there in eight plays after safety Juston Burris, who was just signed on Friday after injuries wiped out the entire starting secondary, intercepted a Jared Goff pass that was deflected by linebacker Joe Schobert. Burris’ return of 15 yards gave Mayfield the ball at his 43 with 2:46 to play.

“It is the moments you want as an offense as a quarterback,” Mayfield said.

But after Mayfield got the offense to the Rams’ 4, there was no composure from the sideline calls to the execution. It was reminiscent of the way the 2018 season ended in Baltimore.

On third down, Mayfield kicked himself for firing for tight end Demetrius Harris at the back of the end zone while Landry was beating safety John Johnson at the goal line.

On fourth down, Mayfield was flushed out of the pocket and just threw it up in the direction of Damion Ratley. It was intercepted by Johnson, sending a still-full FirstEnergy Stadium crowd home disappointed.

Nobody was more deflated by the ending than Mayfield and coach Freddie Kitchens.

“I think I am going to have recurring nightmares over the throw to Demetrius up top,” said Mayfield (18 of 36 for 195 yards, three sacks and a 64.0 passer rating). “I think I will be able to look at the film and know I have Jarvis underneath.”

The honeymoon for Kitchens as play-caller officially ended on this night. He was grilled on non-brilliant play-calling.

And then there were those four plays from the 4 at the end. The sequence started with 43 seconds left and the Browns owning their full complement of three timeouts.

When Kitchens was questioned about not trying at least one run, he took a defensive stance.

Asked why not, he said, “I just did not.” Then quickly added, “I was being facetious. I should have ran it one time. I should have. That is why I am kicking myself in the ass for it right now.”

As for the fourth-and-9 draw play, which elicited boos from the crowd, Kitchens said, “Bad call. It just did not work. It was a bad call.”

From the start, the contrast between Kitchens and Rams coach Sean McVay, the league’s resident offensive genius, was evident.

The Browns came out on offense making three penalties on their first possession. Those miscues deflated a crowd that was pumped up to enjoy its first Sunday night home game in 11 years.

Meanwhile, McVay was having Goff distribute the ball to slot receiver Cooper Kupp (11 receptions, 102 yards and two touchdowns) and Brandin Cooks (eight for 112). He also executed a high school double reverse from Kupp to Robert Woods that netted 17 yards.

Even so, the Browns’ defense performed heroically without all four starters in the defensive backfield and linebacker Christian Kirksey.

The Brown were up, 6-3, at halftime on Austin Seibert field goals of 23 and 35 yards. Those were harbingers, however. The Browns were forced to kick chip shots after having first-and-goal from the 9 on the first one, and could not capitalize on a Myles Garrett strip-sack and Schobert recovery at the Rams 17 on the second one.

“The defense played out of their minds tonight,” Mayfield said. “Talk about all the guys that they did not have. They did not use any of it as an excuse.”

Besides Schobert’s fumble recovery, the Browns got a diving interception by cornerback T.J. Carrie in the third quarter after the Browns had pulled ahead, 13-10 on a 2-yard Mayfield TD throw to Harris.

But the had to punt in three plays. And then Burris’ interception in the final three minutes resulted in the heart-breaking ending.

Kitchens again got defensive when he was asked about the lack of creativity in play-calling compared to last year.

“It takes time to develop offensively,” he said. “We kind of hit the ground running last year because we had been through eight games already, so we knew what we were doing. I would say I have to do a better job during the course of the week of putting these guys in better situations and then on game day.

The Rams improved to 3-0 and maintained their undefeated record (9-0) against AFC teams in regular season under McVay.

For the Browns (1-2), all is not lost, of course. A more significant test awaits in Baltimore against the division-leading Ravens (2-1).

This first half of schedule was not going to be an easy ride for the Browns. But if they’re going to grind out wins until their offense runs more smoothly, they’d better do it in their division games.