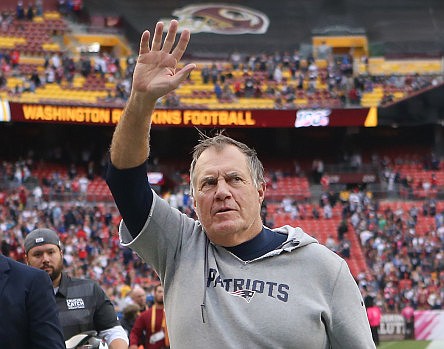 Editor’s note: Tony Grossi is an analyst for 850 ESPN Cleveland and TheLandOnDemand.com.

Bill Belichick, 67, has been coaching for 44 of the NFL’s 100 seasons. He started as a special assistant with the Baltimore Colts at the age of 23. At some point, he decided to chase history. His next win will be the 300th of his NFL head coaching career. He would join Don Shula (347) and George Halas (324) in the 300 Club. This game completes a career full circle for Belichick. His first NFL head coaching win came as Browns coach against the Patriots in Foxborough in 1991. Now he can reach 300 as Patriots coach against the Browns in the same venue. Standing in his way is Freddie Kitchens. Some perspective on this coaching matchup: Kitchens has been a head coach for six NFL games while Belichick has won six Super Bowls as a head coach. Kitchens is 44, which means Belichick has been in the NFL for as long as Kitchens has been alive. “I have a lot of respect for the coaches in this league, and I have the utmost respect for him, everything he has done and everything he represents,” Kitchens said. “Everybody wants to kind of be like him. I do not know a better football coach in the NFL -- past, present or future.”

Second down: Chasing the GOAT.

This will be the first time playing against Tom Brady for 16 of the Browns’ 28 defensive players. And it very well could be their last time, too. Brady, 42, is in the last year of his Patriots contract and there is increasing speculation that the six-time Super Bowl champion will retire after this season. If so, it will be the only chance for Myles Garrett to notch a sack of Brady, for posterity. More than that, of course, is the belief that for the Browns to have any chance of defeating Brady for only the second time in his 20-year career, Garrett must impose his will on the Patriots’ offensive line and get to Brady. Garrett said, “You have to make sure that he is out there ‘seeing ghosts,’ he is holding the ball, he is patting it and he is looking for other options, and you can have some time to get the ball out of his hands, strip him and get the ball to your offense.” To his credit, the ever-respectful Brady said of Garrett: “He just has all the traits. I mean, he's got every move -- speed, power, quickness, inside moves, around the edge. I think his effort, too. I think he's got an incredible motor, just to get around the edge and even if he's chipped, double-teamed, whatever it is, he just keeps going, and I think he pursues. He's just a great young player. He's going to be trying to get me, so I've got to figure out somewhere to go with the ball and get it out.”

A year ago, the Browns moved Greg Robinson into the starting spot at left tackle for the ninth game – and the team went 5-3, partly due to his protection of Baker Mayfield’s blind side. This year, Robinson has been benched after six games. The replacement is expected to be Justin McCray, who has never made an NFL start at left tackle. There also is the possibility the Browns will replace Eric Kush at right guard with Wyatt Teller, who has played in only one game for the Browns after coming via trade from Buffalo on Aug. 29. If Kitchens, in fact, uproots 40 percent of the starting offensive line against the faraway No. 1 defense in the league, it opens him up to severe criticism if it blows up or high praise if it succeeds. Frankly, it is the most crucial decision made by Kitchens in his short time as Browns coach.

Jarvis Landry provided Belichick bulletin board material when he proclaimed the Browns were “goin’ to win.” It didn’t matter the context of the quote, which was made in response to a question about the Browns’ mindset as they embark on their final 10 games after their bye. Belichick had the quote printed and posted in the Patriots’ locker room within an hour of it being falsely circulated on the Internet as a Landry “guarantee.” Landry was unfazed by the Twitter hysteria his comments created. Kitchens didn’t handle it as well, and accused local media of doing Landry, and the Browns, wrong by Tweeting the comments out of context. To his credit, Landry was the only Browns player to not genuflect at the altar of Belichick and Brady and the Patriots all week. He might have served his team better, however, by saving his comments for his teammates’ ears only.