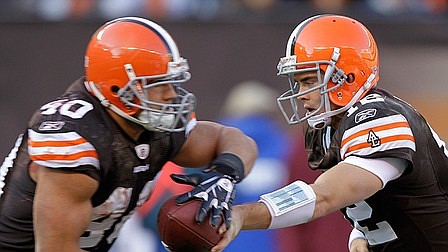 Peyton Hillis and Colt McCoy were key players in a big Browns win.

The Browns are talking up the New England Patriots this week, and not as ploy to swell their heads. They genuinely sound in awe of them.

It’s hard not to be.

The Patriots are 7-0 and are outscoring opponents by 175 points – the most by an NFL team through seven games in 100 years. Their defense has allowed one passing touchdown and two rushing touchdowns. Their 18 interceptions double the next-best total in the league, and now they face the quarterback who leads the league in throwing interceptions. And they haven’t lost to a first- or second-year quarterback in 20 games.

“There is no weaknesses on that side of the ball,” said coach Freddie Kitchens. “Offensively, they have several guys that can make the plays, and of course, you are dealing with probably the best quarterback of all time. That is before you ever get to the coaching – the best coaching in the National Football League history, probably. Look at the Super Bowls. That is what you strive to do is be what they are on every level. I do not see many weaknesses anywhere there, probably in the whole state of Massachusetts.”

Odell Beckham, who admitted he hoped to some day be traded to the Patriots, said, “It has just been this way for as long as I can remember. It has been the team that everybody has their eyes on because they are the best. [Bill] Belichick has just done a phenomenal job over there in running it and getting the team exactly how he wants it. You are going to have to bring your A+ game. You can’t beat them by making mistakes. They do not make many mistakes. They have few penalties. They play perfect.”

Baker Mayfield, who held five of Tom Brady’s six heavy Super Bowl rings in an NFL-produced commercial commemorating the NFL’s centennial celebration, said, “Obviously, they are a well-coached team. That is just plain and simple. They are aggressive. They give their secondary the chance to play aggressive and have eyes in the backfield to see where the ball is thrown, and then they are always in the right place at the right time. It is part of being well coached, guys knowing exactly what they need to do and doing their job. They play well with each other.”

It sounds impossible for the Browns to beat the Patriots with their GOAT quarterback and GOAT coach.

In fact, it has happened only one time in seven meetings since Belichick and Brady formed their unique partnership.

Mangenius: In the middle of the 2010 season, the Browns were 2-5 and coming off an upset victory against the defending champion New Orleans Saints. The Patriots were prancing merrily atop the AFC East, as usual, with the league’s best record, 6-1.

This was a Patriots team sporting perhaps the best offensive line of the Brady era, with a bevy of receiving targets, such as Wes Welker and Julian Edelman and Deion Branch, and a pair of rookie tight ends named Rob Gronkowski and Aaron Hernandez.

Defensively, Belichick had younger versions of current defensive stars Devin McCourty and Patrick Chung, along with stalwarts such as Vince Wilfork, Rob Ninkovich, and Jerod Mayo, now an assistant coach.

Like this year, the Browns were coming off a bye week. Browns coach Eric Mangini used it to prepare two defensive game plans for Brady -- one for the first half and one for the second half.

Mangini had the benefit of intimate inside knowledge of Belichick, his estranged mentor and friend. Mangini also had a pair of assistant coaches on either side of the ball with similar team ties to Belichick – Rob Ryan on defense and Brian Daboll on offense.

The game was in Cleveland, not Foxborough, MA, and the Patriots were favored by only four points, not 10.5 as they are on Sunday.

And the Browns proceeded to slaughter the Patriots, 34-14, with a rookie quarterback, Colt McCoy, at the helm.

Pouring it on: Before Brady had taken his first snap, the Browns were up, 10-0, on a Phil Dawson field goal and a Peyton Hillis touchdown run after the Patriots fumbled away their first kickoff return.

It was 17-7 at halftime. The Browns put the game away on back-to-back scoring drives in the second half that consumed 7 minutes and then 7 minutes, 48 seconds.

It was a masterpiece.

McCoy did not commit a turnover and only a Hillis fumble kept Daboll’s offense from a perfect game.

Daboll shamed Belichick with a trick play for a touchdown – receiver Josh Cribbs taking a snap in shotgun formation and handing off to receiver Chansi Stuckey lined up beside him.

Gronkowski and Hernandez had several drops and Gronkowski was stripped of the ball at the Browns’ 2.

Belichick effectively submitted by inserting Brady backup Brian Hoyer at the end and having him take a knee to end the proceedings.

Mangini received a Gatorade shower from his players before the two-minute warning. In the post-game scrum, Mangini was stunned by a congratulatory handshake from Belichick, who had disowned him in 2007 after Mangini turned him in as Jets head coach in what became known as Spygate.

In his post-game Q & A concession speech, which lasted 3 ½ minutes, Belichick said, “They absolutely did everything better than we did, every single thing you could measure.”

It was the absolute highlight of Mangini’s coaching tenure with the Browns … but merely a blip in the Belichick-Brady dynasty.

The Browns lost six of their last eight games and Mangini was fired by Mike Holmgren after finishing with a second consecutive 5-11 record.

The Patriots won eight in a row to finish 14-2 before losing to Rex Ryan’s Jets in the AFC divisional playoff round.

The next year, Belichick was back in the Super Bowl and the Browns were 4-12 under new coach Pat Shurmur.