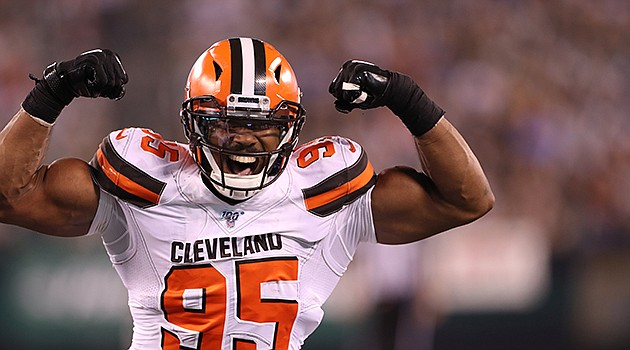 Myles Garrett is looking for that signature game.

The list of “disappointing things about this Browns season” is a long one. Not far down on that list should be the play of the defensive line.

Yes, the Browns are eighth with 19 sacks and fourth in sack percentage. But when you take away Myles Garrett’s nine, only five sacks have been recorded by other linemen, Larry Ogunjobi (three), Olivier Vernon (one) and Chad Thomas (one).

And when you consider opposing quarterbacks have a 102.6 passer rating against the Browns – completing 67.7 percent of their passes with 12 touchdowns vs. four interceptions – you can’t argue the D-line is playing up to coach Freddie Kitchens’ prediction that it would be the strength of the team.

Then there’s that old bugaboo of run defense.

The Browns rank 30th against the run – the third time in five years they are 30th or worse. The Browns are yielding 154 rushing yards a game. Only two winless teams are worse – Miami (160.8) and Cincinnati (189).

“We haven’t been at our best yet,” said Garrett.

Money for nothing: Two of GM John Dorsey’s major acquisitions this year were on the D-line, and they did not come cheaply.

He traded right guard Kevin Zeitler to the New York Giants for Vernon and inherited the last two years of a five-year, $85 million contract. Vernon’s $15.5 million salary cap number this season is second on the Browns to Odell Beckham Jr.’s $17 million.

The other pricey pickup was tackle Sheldon Richardson, a well-traveled free agent who signed for three years and $37 million. Richardson received $15 million in guaranteed money at signing. Another $6.5 million guaranteed kicks in if he’s on the roster on March 20.

Currently, the Browns are devoting $41.3 million in salaries to defensive linemen in 2019. Only San Francisco ($46 million) and Buffalo ($45.5 million) are spending more. Those teams are getting a return on their investment; the 49ers’ defense is ranked second and the Bills are third. Those respective defensive lines are primary reasons the 49ers are 6-0 and the Bills are 5-1.

The 49ers’ defensive front absolutely manhandled the Browns in a 31-3 rout on Oct. 7. The Browns’ high-priced front hasn’t done that to any team.

If it’s going to step up its play, now would be the time to do it – against Tom Brady, the GOAT quarterback, waiting for Garrett & Co. in Foxborough, MA, on Sunday.

Now or never: The gameplan to defeat Brady was written in Super Bowl victories by the New York Giants following the 2007 and 2011 seasons. Those two Giants teams were able to pressure Brady into mistakes with just their four linemen, allowing seven defenders behind them to cover the field.

“When you talk about the Giants, you have to understand exactly the four guys they had up front,” coordinator Steve Wilks said with a laugh. “They had four other guys that were on the bench. That particular year, they had a great rotation of eight guys, but you are right. You have to pretty much try to defend them with four. You blitz them … As I mentioned before, he gets rid of the ball so quick so you have to be creative with coverage and some of the things that you are doing, trying to make him hold the ball.”

Garrett said, “I mean, it’s easier said than done. I think he’s the fastest this year in getting the ball off and getting the ball out of his hands. You have to make sure that he’s out there ‘seeing ghosts.’ He’s holding the ball, padding it, looking for other options.”

Brady has been sacked only 10 times in seven games despite having journeymen players starting at the key offensive line positions of left tackle (Marshall Newhouse) and center (Ted Karras). The Patriots’ offensive line always seems to over-perform in the era of legendary line coach Dante Scarnecchia, and this year is no exception.

“They have an offensive line that does its job and a quarterback who knows the game very well and gets the ball out of his hand and gets it to his playmakers,” Garrett said.

Dorsey built a defensive line to take over games, and that hasn’t happened thus far. For the Browns to defeat Brady, the D-line has to be a dominant force like that of the 49ers.

That’s what they’re for.

“I have [seen dominance] at spurts, but we need the consistency there. I think we have the talent up front to be able to do that. As someone mentioned earlier, this is a perfect game for those guys to step up and try to be that dominant force up front.”