John Dorsey Challenges His Team, And Coach, To Follow Examples Of His Past And Turn Around The Browns From A Disappointing 2-4 Start 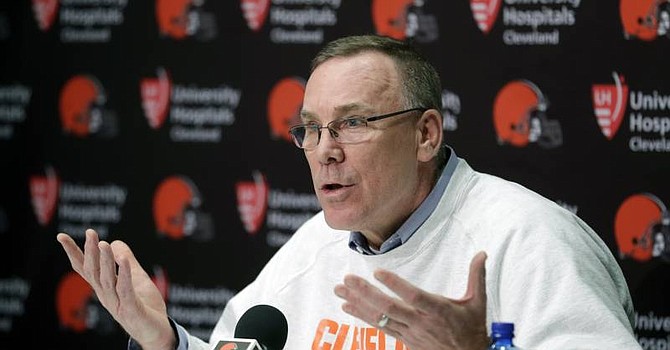 John Dorsey will continue to put the pieces in place, it's a matter of those pieces performing.

John Dorsey laid out the path for the Browns to reach all their goals this year, and it was fairly clear that he expected Freddie Kitchens and his staff to follow the lead of great coaches and lead them there.

“Nobody in this organization is happy about 2-4. That’s real,” the Browns GM said at his team assessment at the bye week. “But let me remind everybody, there’s a lot of football to be played here.

“We have five home games, five divisional games. We’re 2-1 in AFC, 1-0 in AFC North and 0-3 in the NFC. I’ve been on teams that have been on worse starts than this and they played really good on the back end of the season.”

Dorsey conceded the roster has holes that he is trying to fill, specifically at offensive line. He fueled speculation of a trade for disgruntled Washington left tackle Trent Williams by admitting he’s had “a few conversations” with Redskins President Bruce Allen, and in an off-handed exit line said, “Takes two to tango.”

He confirmed there could be changes on the offensive line even absent a trade when players return Monday to prepare for the next game against the New England Patriots.

But on a couple of occasions, Dorsey strongly indicated it’s on the coaches to reduce the self-destructing team penalties that have plagued the Browns and pay closer attention to detail.

“And this is the proper time to clean those things up,” Dorsey said. “I think it’s realistic that you can cut them down. When you have good coaches and they reinforce that on a daily basis and do the emphasis there, that’s going to happen.”

He was a backup linebacker and special teams player on the 1984 Packers, coached by Forrest Gregg, that began the season 1-7 and finished 8-8.

He was director of college scouting with the Packers in 1992 when first-time head coach Mike Holmgren started 2-5 and ended 9-7.

And as GM with Kansas City in 2015, Dorsey saw coach Andy Reid turn around a 1-5 start with 10 consecutive wins to earn a playoff berth.

In other words, Dorsey expects to see Kitchens follow the examples he cited.

“Everybody in the building has to understand it’s one of those moments where you have to reflect, pay attention to detail, and move this thing forward with a sense of urgency, and that’s what we’re going to do,” he said.

That was exactly the theme Kitchens expressed to his team, and then to media, this week – which exemplifies that he and his boss are on the same page.

And Dorsey spent much of his 30-minute Q & A singing the praises of Kitchens and his coaching staff.

-- On whether the coaches need to improve game management:

-- On Kitchens in general:

“I think that Freddie has done a really good job. I think the team has responded very well. I think the players play hard. What I liked as I observed is he is really good at delegating. He has hired a really good football staff. I like the offensive scheme that he has kind of developed, which [unfolded] in the Seattle game by putting No. 6 [Baker Mayfield] in a really good position to kind of move those chains. I think we basically demonstrated our offensive rhythm in that one game as an example. What I did like is on fourth downs. I like the strategy and the courage that he used in terms of going for it at proper times. That is good stuff right there.”

-- On Kitchens’ handling of play-calling duties while managing the game as head coach:

“No, it has not been [too much for him]. Freddie was hired for a reason, and that was to lead men and in the trust that those men have in Freddie, and then also for his offensive play-calling experience. I think he has actually put together some really nice gameplans. I applaud him for that. I love where he is right in terms of that first-year head coaching label you all try to stick on him. I think he has done a nice job.”

Not Baker’s fault: Dorsey gave Baker Mayfield the benefit of doubt of still growing into the role of franchise quarterback. Dorsey is Mayfield’s biggest fan in the building, and his confidence in him has not wavered.

“To master the quarterback position is very hard,” Dorsey said. “You just can’t go up and show up and do it. There is a lot involved in this. He is in his second year.

“Right now, defensive coordinators have probably thrown different looks that he has not seen. Baker is one of those guys that he is smart enough that he is not going to make the same mistake twice. He is learning from that, but I like where he is.

The harshest criticisms of Dorsey were reserved for starting offensive tackles Greg Robinson and Chris Hubbard, whom he challenged to "be more consistent.”

Dorsey has made seven major transactions on his offensive line since March, including the trade of 2018 draft whiff Austin Corbett on Tuesday. And there was no doubt that he is trying to do more before the Oct. 29 NFL trade deadline.

“We will do extensive research. We will make a million phone calls. If we think we can improve a position, regardless of what that position is, we will go about it if we think it is the right fit for the Cleveland Browns,” Dorsey said.

And even if he doesn’t add another lineman, it sounds as if some change will occur by next week.

“Yeah, that is coming down the road,” he said.