It All Started For Freddie Kitchens In Arizona, And It Might Have Ended For Him There, Too 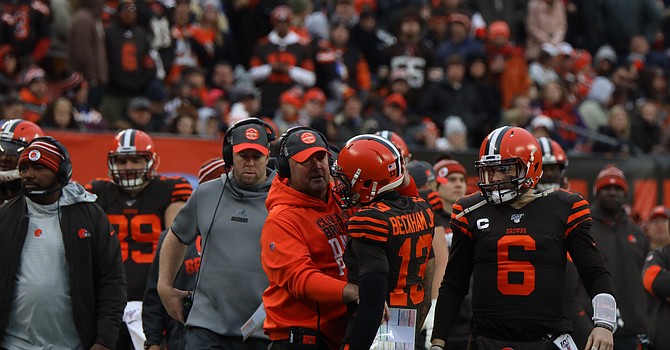 Freddie Kitchens' chances of seeing a second season as Browns coach may have died on a cactus in the desert. (RobLorenzo)

1.The biggest reason to make an in-season coaching change is to avoid having the wheels come off and ending the year in one big train wreck. I was holding out hope that Freddie Kitchens could pull it together, win at least eight games, and earn a second year after a difficult rookie season. But I’m afraid he might have reached the point of no return in Arizona, which was, ironically, where he spent 11 years as an NFL assistant coach.

2.It was in Arizona, too, where Kitchens had his coming-out party as Browns coach at the NFL owners meetings in March. John Dorsey had just pulled off the trade for Odell Beckham Jr. Expectations were escalating and TV and cable network executives were lobbying to have the Browns put on their prime-time schedule. It was there at the Arizona Biltmore – where the Browns also stayed last weekend -- that an NFC team executive said to me, “You know what the No. 1 story is on the Browns? … Freddie Kitchens.” Like a lot of others, he questioned whether Kitchens was equipped to handle the unique challenges he was in store for. How prophetic.

3.One more thing about the Arizona meetings. Kitchens laughed at media questioning him about dealing with lofty team expectations, a heavy slate of prime-time games and a locker room full of big egos while managing games as head coach and play-caller for the first time. “I am scared to death of all those,” Kitchens said. “I mean, I really am. I don't know how I'm going to deal with it. I really don't know if I'm ready for this job. I really don't, man.” Then he broke into a big smile. “Naw.”

4.Now we know how it turned out. All the concerns about Kitchens have been realized. And some not even considered at the time propped up. Who thought Baker Mayfield would regress? Who thought the defense would be a weakness and not a strength? Who thought Myles Garrett would freak out and be suspended for six games? Who thought young ascending players such as Rashard Higgins, David Njoku, Genard Avery and Austin Corbett would disappear?

5.So if the wheels aren’t completely off, they are squealing loudly as the train skids down the tracks. Reports of Beckham wanting out were followed this week by a Tweet by Michael Silver of NFL Media reporting that Jarvis Landry yelled to the Cardinals sideline, “Come get me.” Last week, Landry denied Beckham wanted out. But during Sunday’s game, Landry barked at Kitchens about not getting the ball enough while the game was slipping away. After the game, Landry and Beckham stood side by side and professed their respect and love for Kitchens. But the optics seemingly contradict their words.

6.On Monday, Kareem Hunt added some incriminating observations. He said of the flat performance in Arizona, “I feel like there were some plays that everybody didn’t leave their 110 percent out there the whole play, through the whole play, through the whole whistle. And we’ve got to do that if we want to be successful. You can’t point out one person or nothing like that. It’s everybody, and everybody’s got to do their job.”

7.Hunt added, “We’ve got all the pieces and it’s just going out there and playing as a team and everybody playing hard each and every play and no taking plays off or nothing like that, and just finishing. We’ve got to finish, and we’ve got to come out strong and that’s usually our thing. Usually you get off to a hot start, and shoot, we wait for them to – they hit us in the mouth first.”

8.Kitchens admitted his team didn’t come out ready to play in Arizona. Mayfield said the Browns started slow and played from behind all day. The defense looked woefully unprepared right from the start, and then quit sometime in the second half.

9.And yet, the offense has generally been well-prepared to start a game fast. The Kitchens offensive script almost always produces points on the first drive, except when a turnover suddenly appears. That’s what happened in Arizona. Mayfield drove 68 yards on 5 of 6 completions for 51 yards. The only miss was a Beckham drop. And then came the interception on a high pass for Beckham in the end zone. All of this makes it more mind-boggling that Kitchens deferred the opening kickoff and put the defense on the field first. Electing to put his weakest unit on the field first to face an up-tempo offense for which it was unprepared set the tone for the game.

10.After the game, Kitchens said, “I don’t care about my future as Browns coach.” ESPN analysts Dan Orlovsky and Rex Ryan had a field day with that quote and called for Kitchens' firing. But it was obvious that Kitchens’ point was that he cared more about doing his job than worrying about his job. On Monday, Kitchens made a point of clarifying his comments. “I care about my job. Of course, I want to be back,” he said. This is another part of the head coaching job that Kitchens has not been good at – public comments. And when the season goes off the tracks like this one has, the head coach drowns in just about everything he says. For example, Kitchens lamely tried to point out some positives from Sunday’s loss. “We only punted twice,” he said.