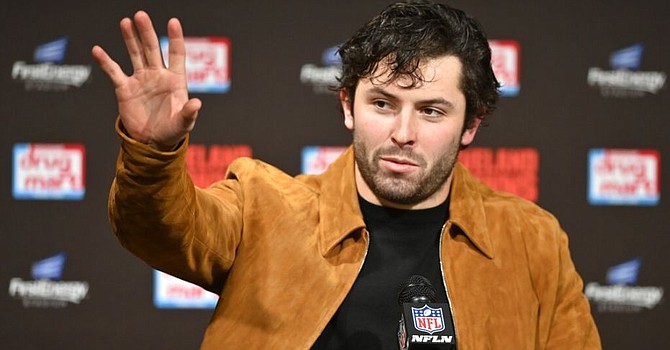 The clean-up of the fallout from Baker Mayfield’s comments about the team’s medical staff is in full force.

“I’ve talked to Baker about it this morning,” Kitchens said. “Just like he stated last night, he understands we don’t want him addressing other players’ injuries in that manner.

“Odell and our training staff have done a tremendous job of getting Odell to the game each week. That’s really all the info I have. He understands how to handle things like that moving forward.”

Mayfield opined that Beckham's injury could have been handled another way and he would have missed only the first two games of the regular season if he’d had surgery in training camp.

Kitchens declined to say whether surgery was discussed or any details about the injury. Beckham has been routinely listed with a hip or groin injury on the team’s daily injury report.

Two veteran teammates available in the locker room defended the medical staff and attributed Mayfield’s comments to his competitive nature.

Center JC Tretter said, “I’ve obviously worked with them quite a bit. They are great trainers, great people as well. They’re always looking out for your best interests, what’s going to keep you healthy and keep you on the field. I can’t say enough good things about the guys in there, from top to bottom.

“I don’t know anybody who’s had a bad experience with them. Those guys are always looking out for you. I have full confidence in them, what they do, the way they approach the team and individually.”

Tretter said he intended to speak privately to Mayfield about speaking out of turn.

“Sometimes it’s just the heat of the moment, and there’s kind of a misspoken quote,” Tretter said.

“Anybody who knows Baker knows he’s an emotional, fiery guy, a competitor,” he said. “In his heart, he wants whatever’s the best for our team. If he speaks something after a game, obviously he’s a young guy, things are said out of context, or he might have went down a trail he didn’t actually mean.

“I know where Baker’s heart is. I know the training staff. I know things like that aren’t going to be a real problem for us.”

The other OBJ story: As for the national storyline that Beckham has told other players he wants out and is unhappy with the state of his career in Cleveland, Kitchens said he has never picked up that vibe from the receiver. Players characterized Beckham as an exemplary teammate.

“He always seems happy,” Schobert said. “He gifted the whole team shoes today. That was nice of him. His Nike Air Max720 OBJ.”

Schobert said it was the second installment of gifted shoes from Beckham this season.

Tretter also said that Beckham hasn’t carried himself like he’s unhappy being a Brown.

“It always seems like he’s having a fun time,” Tretter said. “He’s light-hearted. You’re able to make fun of him, he makes fun of you. He’s been a model citizen since getting here. I haven’t seen any negative to it. I feel he gets along with a lot of guys really well.”

Both players admitted Beckham is frustrated when he is unable to make plays to help the team win.

“But that doesn’t always mean it’s a shot at anybody or a negative to the team,” Tretter said.

“He wants to do whatever he can to help the team win. From what I’ve spoken to Odell about, he cares most about winning.”

Schobert said the fact Beckham keeps trying to play with a sports hernia injury “is a testament to what a competitor he is.”

Kitchens disputed the storyline that Beckham has told opposing teams he wants out of Cleveland.

“Did Odell say that? Ok. Case closed,” he said. “Odell has not told me anything remotely about that. I know he’s done a great job of getting ready each Sunday.

OH-IO: Schobert, a proud Wisconsin Badger, said he was a little surprised that Ohio State turned a 21-7 halftime deficit into a 34-21 route of his former team in the Big Ten championship game on Saturday. He had nothing but respect for the Buckeyes and their coaches.

“I said before the game if Wisconsin tackles the whole game, they’re going to be in good position to win the game,” Schobert said.

“I think the first half they played lights out on defense, tackles all over the field. Second half, as time wears on, Ohio State has all those athletes, you see a couple missed tackles and extended plays. That tires a defense out. And we weren’t able to get as much offensive production.

“Hopefully they’ll represent the Big Ten well in the playoffs.”