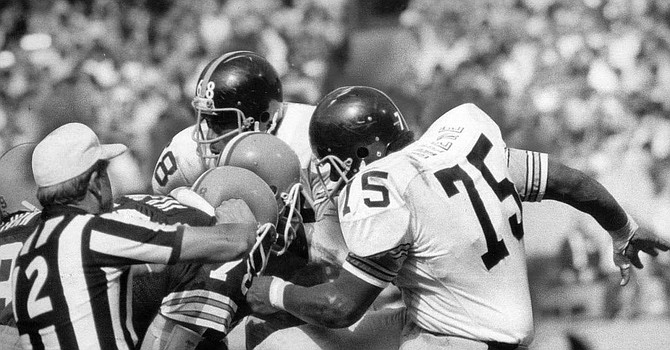 The revival of the long-dormant Browns-Steelers rivalry is rooted in the final weekend of the 2018 season.

The Steelers were victorious in their 16th game, but needed a Ravens loss to claim the AFC North division title. The Browns were taking the Ravens down to the wire in Baltimore.

On the giant video screen in M&T Bank Stadium, the image was shown of Steelers players kneeling on the field watching the Browns-Ravens game on the Heinz Field video screen, rooting for the Browns – their rivals since 1950 -- to pull off the upset. It didn’t happen, and the Steelers were shut out from the playoffs.

The Browns physically beat the Steelers, knocking out two offensive players with concussions on illegal helmet-to-helmet hits and dominating their offensive line. In the final eight seconds, a brawl erupted when pass rusher Myles Garrett tangled with Pittsburgh quarterback Mason Rudolph and then ripped off his helmet and bopped him on the head with it.

When the dust had cleared, three players were suspended – Garrett for the rest of the season – and two franchises plus 35 players were assessed more than $800,000 in fines.

Seventeen days later, the teams meet in Heinz Field for the rematch in what amounts to an elimination game. The loser likely is out of the playoffs. The winner lives for another week.

In the spirit of the rivalry being renewed, we spoke with Browns players from three different eras to give their thoughts on Cleveland vs. Pittsburgh.

Jackson was undrafted out of Duke at a time the NFL draft consisted of 17 rounds. He entered the rivalry the year after the Steelers won their first Super Bowl behind their future Hall of Fame-laden Steel Curtain defense.

His break – if you want to call it that – came after one of the ugliest scenes in the Cleveland-Pittsburgh rivalry.

“Seventh game of the season. Joe Greene kicked Bob McKay [in the groin]. Bob went to the ground and Joe kicked him three more times. It was a 15-yard penalty and Joe got fined like $1,000. Bob was so shaken, he never came back. That’s how I got my start.

“His heart was never in it anymore. Joe alleged Bob was holding him too much. Bob was hurt, but also mentally. I think he just lost his will after that.

“[The rivalry] was always physical. We never said hi or goodbye on the field. Never said a word to them. It was both sides of the field that way. Very intense. The same way the fans felt about each other. We used to have a lot of episodes. There was always a lot of tension between us.

“Seeing this thing come up last week just brings up old memories of the way it was.

“Remember when Joe (Turkey) Jones slammed Terry Bradshaw [in a 1976 game]? Turkey body-slammed him head-first into the ground. [Jones received a 15-yard penalty and was fined $3,000].

“[Guard] Henry Sheppard and Jack Lambert got into it [in a game in 1978]. Jack Lambert hit Brian Sipe and got a penalty. They threw a flag and Lambert was going nuts, and Henry said something like, ‘Nice late hit, Jack’ and they got into a fight. Everybody had to broken up.

"Lambert got kicked out. There were always incidents going on.

“That Joe Greene thing was about as bad as anything I ever saw in football.

“I played against Joe Greene probably 18 or 20 times. In all my career, I’d never even spoken to Joe. Never said hi, never goodbye. He was very quiet, Joe. Awhile ago, I was on the Cleveland chapter of the NFL alumni golf team and we went on to play at the event at the Super Bowl. The night before, they were inducting Joe in the [alumni] hall of fame at dinner. I thought, ‘Oh, gosh, what do I say?’ I’d never said a word.

“So we go to dinner, my wife and I, and I introduced myself to Joe Greene. He says something about some of the other guys, Henry Sheppard and Doug Dieken. Then Joe goes up for his award and is introduced by Donnie Shell.

“After all those years, this was very humbling to me. Joe Greene got up and said, ‘A really nice young man came up to me and introduced himself. But I knew who he was. Robert Jackson, No. 68, Cleveland Browns, Duke University, undrafted in 17 rounds. The best player I ever played against.’ He went on five minutes talking about me. He knew everything about me. It was nice to hear after all those years that I had his respect.

“I think this game coming up is gonna be just like one of the old games. Very, very physical battle. That’s what you expect.

“I always hoped it would get red hot again. It’s been rather depressing to see all the handshakes and players getting together after the game and chatting and carrying on over the years. To me, maybe you do that with other teams. The Steelers, we never even thought about that. I think we’re going to get back now to where it’s all about the field again.

From tiny Elizabeth City State, Langhorne had no idea of the Browns-Steelers rivalry when he was drafted in the seventh round in 1985. By his second season, the Browns were in the midst of a 16-game losing streak in Three Rivers Stadium. It was broken in 1986 when the Browns won, 27-24.

“Probably one of my biggest memories was being from a little school and not knowing of the Pittsburgh rivalry. I didn’t know the effects of it until after we won. Everybody got a game ball.

“[Coach] Marty [Schottenheimer] was one of those guys that would say you’re going to hear a lot of hoopla, but you have to focus on the game like it was any other game. It was more the guys like Hanford [Dixon] and Ozzie [Newsome] who talked about the rivalry.

“Is it back? When you hit somebody over the head with a helmet, odds are the rivarly’s on. It’s the Hatfields and McCoys. I don’t know if it would have been a rivalry if we would have just won that game. Obviously [with] Big Ben [Roethlisberger] being the quarterback for so many years, I don’t know if you get a lot of credit beating up on a backup guy.

“But that Thursday night, it steamed it up for the fans just as much as it did for the players. Guys want to go in there now, do their work and be safe.

“Yeah, I’m excited. The fact is the energy will be brought back to this football game for the next 10 years. That Thursday night game has fired it up.”

The Steelers christened the expansion era of the Browns by drubbing them, 43-0, in their first game back in 1999. Before that game, Steelers coach Bill Cowher fired up his team by telling his players the Browns wouldn’t even introduce them before the game. In fact, Cowher had told the Browns not to bother with them because it was their night and they should enjoy the festivities.

But in the rematch nine weeks later, Dawson made a field goal as time expired for a 16-15 Cleveland victory. Steelers President Dan Rooney later termed it one of the worst losses in Steelers history.

Dawson also played in the only playoff game in Browns expansion history, a 36-33 loss to Pittsburgh in Heinz Field.

“As a young player in the league, that whole first game was just a blur. So the season goes along and you start hearing about the Steelers and what it means to Cleveland to beat the Steelers. You talk to guys like Doug Dieken and you hear about the struggles of going to Pittsburgh, and trying to win a game over there. Then here it is we’re playing at Three Rivers Stadium and we come out with a victory. The reaction afterwards was overwhelming.

“You started to think you had a taste of it … But after we beat them, which was a pretty miserable season if you remember, to actually beat them in an otherwise pretty rough season, and to see how the city responded and celebrated … I remember going to work after the game and there were two tickets to Game 6 of ALCS Indians-Red Sox [in my locker]. I still don’t know who gave them to me. They were front row. My wife and I were still new to the area, and we’re sitting in the front row. I can remember sitting at that baseball game going, ‘Wow, yesterday was real big deal.’

“We kept changing players so much [over the years]. I think everyone knew it was a big deal, but they were always new to Cleveland. It was only the guys that hung around that had true respect for the rivalry. The Steelers, the way they run their organization, I always felt they understood [the rivalry].

“There was a different energy. I don’t know if it was on the field so much as from the crowd. You could feel it in the stadium. Players turned it up as a result. There’s definitely a different energy as a player during the week. Steelers week was always a different kind of week and that was fun. There were certainly some moments.

“I remember the hit Colt McCoy took from [James] Harrison. I thought Colt was dead on the field. The playoff game with [coach] Butch [Davis]. Thought we had it won. I remember in the fourth quarter of that game, it was a legit war. There were definitely some examples of the intensity level. Just wish we had more success.

“In some ways, yes, I think the rivalry [is back]. The fact the Browns beat the Steelers does rekindle or reignite some of the sense of rivalry that wasn’t there so many years. I don’t know that one game gets it back to how it was pre-expansion Browns. I think there’s a long way to go to get to that point. I hope it some day will gets back to that.

“I was really disappointed that given our struggles through the years to beat Pittsburgh that when we finally did and in convincing fashion [on Nov. 14], the story was not that. The story was all the stuff that happened.

"As a diehard Browns fan myself, I would have loved to walk away from that game celebrating. I just found no one was talking about that. I was just disappointed the celebration wasn’t there, per se, because of all the hoopla surrounding all the other stuff that happened.”