Freddie Kitchens Doesn’T Think Browns Have Done Anything (Yet) To Revive Steelers Rivalry. 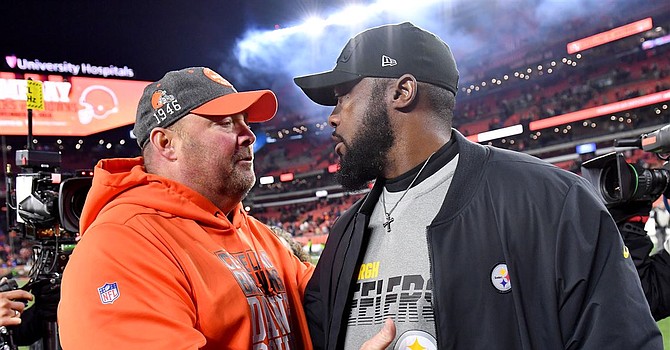 Freddie Kitchens is 1-0 vs Mike Tomlin as HC. Post-Gazette)

1. Agree to disagree: Freddie Kitchens doesn’t think the Browns have done enough to stoke the rivalry with the Steelers.

“To me, it takes two to have a rivalry,” said the Browns coach. “That is probably not going to sit well with some people, but to me you have to win your share to make a rivalry.”

The Browns beat the Steelers, 21-7, on Nov. 14, in a brutal contest that ended in a melee with three players ejected, three suspended, and 35 players fined – including four Browns for personal fouls on illegal hits. That victory merely improved the Browns record to 7-34-1 against their closest rival in the expansion era.

“No, not even close,” Kitchens said.

Mike Tomlin disagrees on Kitchens’ opinion of the rivalry.

“I don’t know that it was dead,” the Steelers coach said on a conference call.

So it’s on to Heinz Field, where the Browns have lost 15 in a row and attempt their first season sweep of the Steelers since 1988.

2. More rivalry talk: Baker Mayfield did not disagree with his coach that more has to be done to intensify the rivalry.

“I think if you look at recently, yeah, that could be the case, but it is about right now,” he said. “It is about what we have in front of us and this game. To us, this is this the biggest one of the season, just like the next one always is. That is how we have to handle it.”

Whatever the atmosphere awaits the Browns in Heinz Field won’t be as bad as what Mayfield has confronted in his past, he said.

“I would say probably the most violent place I have played in was my return back to Lubbock [TX, to face Texas Tech]. I don’t think Pittsburgh could match that. I really don’t,” he said. “It was about 40,000-50,000 people screaming, ‘F You, Baker.’ We will see.”

Odell Beckham Jr. said he enjoyed playing in Philadelphia when with the Giants. He considered the Eagles the Giants’ biggest rival.

“Going into Philly was always a tough environment,” he said. “There were little 9-year-olds flipping you off.”

3. Uh, oh: Left tackle Greg Robinson reported to work with concussion symptoms and was placed in protocol, imperiling his status for Sunday’s game in Pittsburgh.

If Robinson can’t go, Justin McCray would be the likeliest fill-in. McCray started at left tackle in the New England game when the Browns hoped to shock Robinson into better focus in a one-game demotion.

The Browns gave up five sacks v. New England, matching their season high, and then Robinson was re-installed at left tackle. Since Robinson was reinserted, the Browns have allowed six sacks in four games.

Kendall Lamm would be another option at left tackle. Lamm has not been active in a game since suffering a knee injury in the season opener, though he has been practicing for weeks.

Kitchens declined to elaborate on the surprise release of defensive tackle Devaroe Lawrence, a pre-season breakout player who played in every game. Lawrence had two of the team’s 15 takeaways (interception v. Baltimore and fumble recovery v. Seattle), yet Kitchens shrugged off his departure with these comments: “You have to make roster decisions during the course of the year. You take seven or eight to the game so all you need is seven or eight at the end of the day. Devaroe did a good job while he was here, and we wish him nothing but the best.”