Finally, Browns End Their Misplaced Trust In Antonio Callaway And Release Him 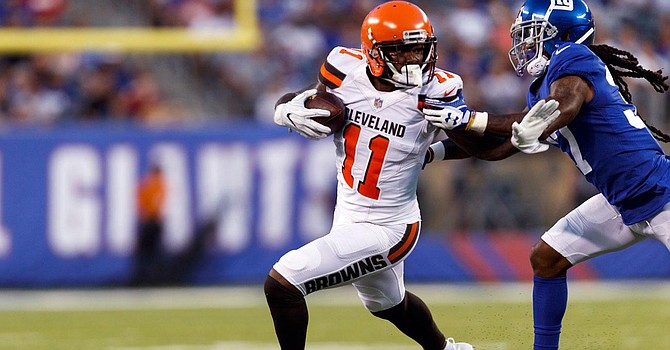 Takeaways from the Browns’ roster moves prior to the Steelers game …

1.In a move that shouldn’t have been surprising, the Browns waived second-year wide receiver Antonio Callaway Thursday afternoon, just four days after he was made inactive for showing up late for their last game.

Callaway reportedly left the locker room in a huff less than an hour after Rashard Higgins, his last-minute replacement, scored the winning points with a touchdown catch in a 19-16 win over the Bills.

Callaway’s behavior in the following days reportedly did not improve. One report said he showed up late for a team function.

Later in the afternoon, Cleveland.com reported that Callaway was appealing a future 10-game NFL suspension for another violation – which has not been announced yet – for using a CBD product tainted with THC to treat pain from a high ankle sprain injury.

Callaway began his second season with a four-game NFL suspension for violating the drug policy. He also had several character issues at Florida. He was suspended by the school for the entire 2017 season.

That’s the reason Callaway fell to the fourth round in the 2018 draft. At the time, Browns GM John Dorsey called him the “first or second” receiver in the draft. Some teams classified Callaway as undraftable because of his character issues.

Prior to Callaway’s first training camp in 2018, he was stopped by police in the early morning for a traffic violation. Police found a small amount of marijuana in his car. Callaway was never cited, but the incident put him on notice by the Browns that they would not tolerate much more.

Still, they tolerated his drug suspension this season, plus several bad and costly plays in the four games he was active.

Obviously, the reported future 10-game suspension finally broke the Browns’ trust in him.

2.The immediate impact of Callaway’s release should be a new appreciation for Higgins, whose playing time was cut because of the seeming stubbornness to make the drafting of Callaway worth the risk.

Higgins put in overtime in training camp and preseason while receivers Jarvis Landry and Odell Beckham Jr. routinely missed practices and preseason games. Higgins was off to a good start in the first quarter of the first game, and then suffered a sprained MCL on a play blocking after a Landry catch.

Higgins was inactive for the next four games and then was unused in his first game back. It was widely assumed Higgins entered coach Freddie Kitchens’ doghouse, though Kitchens and Higgins declined to specify the root of his demise.

Higgins then had one meaningless catch in the New England, nothing in Denver, followed by his game-winning TD against Buffalo. It was Higgins’ only target in the Buffalo game, a clear sign he was scheduled to take a back seat again to Callaway in the game plan.

Higgins can be an unrestricted free agent after this season. Given the Browns’ treatment of him, it’s doubtful he’ll re-sign with them.

3.Callaway’s release means four of the nine players taken in Dorsey’s first Cleveland draft are no longer with the team.

Corbett’s failure to wrest the starting right guard position resulted in Dorsey trading fifth- and sixth-round picks in 2020 to Buffalo in August for guard Wyatt Teller. Teller has started the last two games at right guard, but has not exactly solved the problems at the position.

A possible contender still for the position is Drew Forbes, a sixth-round pick in 2019, who was formally activated off injured reserve, filling the roster spot vacated by Callaway.