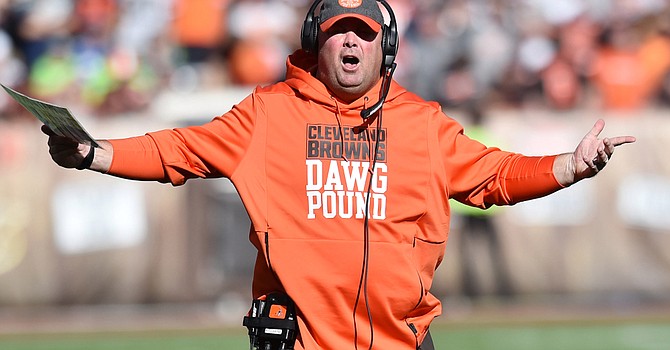 Takeaways from a critical period in the John Dorsey, Freddie Kitchens and Baker Mayfield era …

1.The one trade John Dorsey could make to help his undisciplined team is swap Freddie Kitchens to the Jets for Gregg Williams. OK, I’m not 100 percent serious. It pains me to even write that. I thought it was best to not keep Williams. Like the Browns, I didn’t consider him a serious candidate. I thought his interview for the permanent job was merely a courtesy for a job well done as interim coach. I never thought it would come to this, but Williams’ profane exhortations at his players apparently were more effective than Kitchens’ whoopty-hellisms.

2.Williams was a better head coach than defensive coordinator. No matter how much more likable Kitchens is, the undeniable fact is the final eight games last year were eminently more organized and better managed under Williams. There was more accountability with players who made repeated mistakes and more attention to detail.

3.The insane pace of penalties and turnovers are the big topic again this week after another embarrassment in front of a national TV audience. But I don’t agree with Kitchens that those are the only things keeping the Browns from winning. Game management, coaches challenges, play-calling and overall game-planning always leave you saying, “What did they do that for?” For example, why after four hours of steady rain in Gillette Stadium prior to kickoff did they come out throwing the ball? Then there’s the mystifying drop-off in Baker Mayfield’s game, the inability to maximize play-makers Odell Beckham Jr. and Jarvis Landry, and the disturbing routine by the defense of giving up the back-breaking or loss-sealing play in the fourth quarter. These are all recurring problems. I’m dying to see a game with few or no penalties and no turnovers. I just don’t think it will cure everything.

4.Speaking of Mayfield, his “Go ahead, knock it off!” attitude was refreshing until teams started knocking it off.

5.The only way I can explain what’s happened with Rashard Higgins is the Browns must have decided they’re not bringing the future free agent back after his contract runs out and have chosen to sink or swim with Antonio Callaway as the third receiver. Kitchens’ explanation that “Callaway is doing better [than Higgins]” just doesn’t pass the smell test. Callaway has had negative plays in each of his three games back after his league suspension.

6.Every day under the hot sun of training camp I watched the Browns run two-minute drills and red-zone plays. Every single day. They were better at them in August than now. The entire operation of the offense – from play-calling to execution – is terribly awry in those situations.

7.How is it that the two players most everyone was worried about – rookie punter Jamie Gillan and kicker Austin Seibert – consistently do their jobs well while so many experienced players do not?

8.For the life of me, I can’t understand why the coaches are so averse this year to up-tempo offense and jumbo run formations. They seem blind to the fact the offensive tackles are killing almost every offensive possession. Help them out, for crying out loud.

9.I thought the days of seeing the Browns sink to new lows were over. Obviously not. I’ve never seen a coach call for a false start on purpose and then replace his punt team with the offense and try to convert fourth-and-16. Kitchens said the punt team automatically ran out there out of habit, and by the time Kitchens realized it, he decided to use a penalty rather than a timeout because he had no intention of punting. If that’s truly the case – even if it isn’t the case – the bizarre episode reeks of utter chaos on the sideline.

10.The Browns may be trying to shock Greg Robinson into finding his 2018 form with a temporary demotion. But even if Dorsey beats the Tuesday deadline for a veteran offensive tackle, there is no doubt Dorsey & Co. must go big guy-hunting in the draft season. They have to bag more than one in early rounds. Personal plea: Look to the B1G Ten. Choose from the Big 12 and SEC at your own risk.