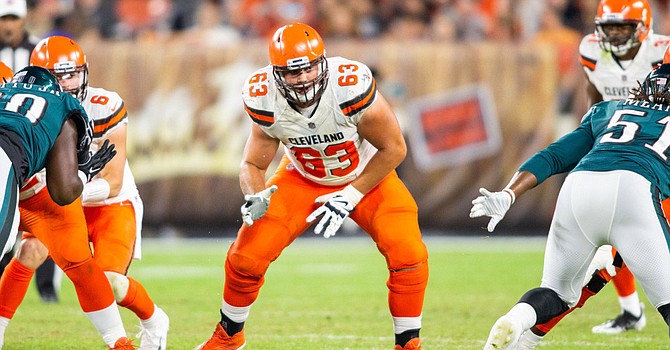 Austin Corbett will now reside in LA with the Super Bowl hopeful Rams.

For Kevin Colbert of the Pittsburgh Steelers, it’s defensive backs. For Ozzie Newsome of the Baltimore Ravens, it was wide receivers.

For John Dorsey, it’s offensive linemen. At least in his early time as Browns general manager.

On Tuesday, Dorsey admitted his first major draft whiff when he traded Austin Corbett, the 33rd overall pick of the 2018 draft, to the Los Angeles Rams for, reportedly, a fifth-round pick in 2021.

This isn’t as embarrassing an exit, say, as trading former Browns No. 1 pick Corey Coleman for a seventh-round pick. But Dorsey didn’t draft Coleman, so he considered that transaction addition by subtraction.

Corbett was Dorsey’s third pick of his first draft in 2018, coming after Baker Mayfield (first overall) and Denzel Ward (fourth), and two spots ahead of Nick Chubb (35th). It was a puzzler then and never panned out.

Corbett was a left tackle at Nevada, the successor there to Joel Bitonio. Although the Browns threw Corbett into a wide-open competition for Joe Thomas’ left tackle vacancy as a rookie, most everyone knew his future was at guard or center. He had cement feet and little athleticism.

After one season, Dorsey projected Corbett as the team’s starting right guard, which was the reason he agreed to ship pricey veteran Kevin Zeitler to the Giants for defensive end Olivier Vernon. When Corbett failed to hold the right guard job, Plan B was to groom him as the successor to center JC Tretter, whose contract is up after 2019. Then, coaches kept evaluating Eric Kush as the better center.

Kush was another Dorsey pickup. He was signed by Dorsey as an undrafted free agent with Kansas City and Dorsey brought him to Cleveland in March. Another former Chief signed this year by Dorsey – guard Bryan Witzmann – was cut in September.

In August, Dorsey hurriedly traded for two more guards, Justin McCray of Green Bay and Wyatt Teller of Buffalo. McCray is a versatile backup and spot starter at any of the five line positions. Teller, now, could be the future right guard.

The other major transactions made by Dorsey at offensive line involve tackle Greg Robinson.

Robinson seemed a godsend last year when he came aboard as a failed No. 2 overall pick of the St. Louis Rams. He stabilized the left tackle position when Freddie Kitchens took over as offensive coordinator for the final eight games.

Robinson earned a one-year prove-it contract for about $6.4 million. But in 14 overall starts with the Browns, Robinson has 12 costly penalties and one ejection. The Browns are intently debating whether they can live with him at left tackle for the remaining 10 games this season.

The seven-time Pro Bowl left tackle, 31, is embroiled in a four-month standoff with the Washington Redskins concerning the team’s handling of a medical condition last season. Williams refuses to report to the Redskins and they adamantly refuse to cave in to his request to be traded.

It’s probable that Dorsey has been trying to wait out the Redskins’ patience with Williams and make a pitch for him. But it’s doubtful Dorsey would give up a first-round pick for a player who has not participated in a team practice since December.

So what can the Browns do about their offensive line to reduce the beating Baker Mayfield has taken this year?

On Tuesday, offensive line coach James Campen said, “I think anytime you have a bye week six games in you obviously assess a lot of different things. We’re in the process of doing that now. We’ll see what transpires during the week and move on accordingly.”

Campen is a key figure in this process. He was the venerable line coach of the Green Bay Packers since 2007 and was lured to the Browns by Dorsey after the Mike McCarthy coaching era closed in Green Bay.

In Green Bay, Campen was known for developing middle- and late-round picks into dependable starters, if not Pro Bowlers. Tretter, who came to the Browns the year before Dorsey arrived, is a big fan of Campen.

Campen’s assessment of his position group this year:

“We’ve had our ups and downs. Some areas of the game we’ve had steady progress. Certainly, we do more to help our team win. Just haven’t been consistent at times. [Lack of] consistency is obvious. Again, we’ll look at all areas we need to improve, things we’re doing well and enhance those moving forward.”

What can be done?: If a starting-caliber left tackle could be acquired – which I doubt – I’ve always heard Robinson might be a better fit at right tackle. But at this point in a season, I think it’s unlikely.

Kush has been a favorite of Campen’s, but there has been mild pressure by Dorsey, I’m told, to get Teller into the starting five – likely at right guard.

“[Kush] has had a couple games where he’s done really well in one area, pass blocking, and then struggled in run-blocking a little bit,” Campen said. “He’s such a competitor and is going to fight for everything. He certainly is a starting guard for us right now. Just like everyone else, evaluations go through and we’ll see where we’re at moving forward. I have a lot of respect for him. He’s a guy that works his tail off.”

Teller, who was acquired on Aug. 29, finally got his first play time Sunday against Seattle when Kush left for a couple plays with a leg injury.

“I think so. He’s getting more comfortable. I think his knowledge of what we’re teaching and from a schematic standpoint I think he’s starting to catch on,” Campen said.

So it sounds as if changes on the offensive line will be made before the Browns’ next game against New England.

Whether or not Dorsey is able to trade for a left tackle, I’ve heard that Dorsey intends to go heavy on offensive linemen in the 2020 draft and has his scouting staff deployed accordingly.

Given Dorsey’s brief history with the position here, it’s a little concerning. But a rebuild in front of Mayfield is necessary and inevitable.