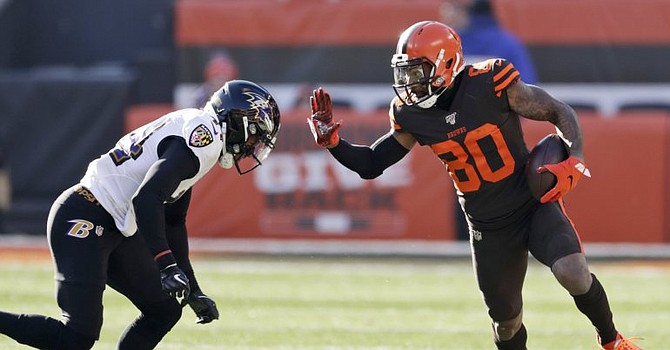 Since their first meeting in Game 4, Lamar Jackson has run away with the league MVP award. (Fox.com)

1. Bah, humbug: If Freddie Kitchens needed a decent performance from his team, and himself, to save his job, he didn’t get it. Puzzling, if not maddening, clock management at the end of the first half led to two quick Baltimore touchdowns and the Ravens coasted to a 31-15 win. Lamar Jackson threw for three touchdowns and ran for 103 yards in extending his career record to 19-3 in regular-season games. The Ravens (13-2) locked up the AFC No. 1 playoff seed with their 11th win in a row. The Browns (6-9) assured themselves of a losing season for the 12th consecutive year. It was another frustrating day. In separate incidents defensive tackle Sheldon Richardson and receiver Odell Beckham Jr. tossed their helmets into the bench area in disgust. With one game left at Cincinnati, the Browns can’t even improve on last season’s 7-8-1 record, which will crank up speculation on the future of Kitchens as head coach.

2. Too little, too late: Through three quarters, Baker Mayfield had thrown 24 times for 101 yards. That’s an average of 4.2 yards per attempt. In the fourth quarter, Mayfield engineered a 75-yard TD drive with completions to Odell Beckham Jr. (15 yards), Jarvis Landry (33) and Rickey Seals-Jones (23). The drive stalled near the goal line but a face-mask penalty on Ravens cornerback Jimmy Smith erased a fourth-down stop, and Mayfield lofted a fade to Beckham, who got both feet down in the right corner for his third touchdown of the year. Seals-Jones dropped a pass on the two-point try.

3. The lateral: With 2:09 to go in the first half, the Browns led, 6-0, and were controlling the Ravens’ powerful offense. The Browns had third-and-1 from their 28. The Ravens were out of timeouts. Just get the first down, maintain possession, and retreat to the locker room with a lead, right? Wrong. On third-and-1, Mayfield lateraled the ball to Kareem Hunt deep in the backfield. Hunt was swarmed by three defenders and nailed for an 8-yard loss. Hunt almost fumbled. The Browns punted after the 2-minute warning. The Ravens then scored two touchdowns on drives of 63 and 75 yards that consumed 32 seconds and 46 seconds. So it was 14-6, Ravens, at halftime, and they got the ball first in the second half.

4. Quick work: Jackson’s first touchdown consisted of two plays – a completion of 24 yards to Mark Ingram down the middle seam, and one of 39 yards to tight end Mark Andrews, who was left alone when safety Damarious Randall broke to the opposite side of the field on the snap of the ball. The Browns then used up all of 23 seconds on their ensuing possession on three Mayfield incompletions, all of which were deflected. With :55 to go, Jackson moved the Ravens 75 yards on five completions. The touchdown again was to Andrews from 14 yards when Jackson threw high over the head of Randall in the end zone.

5. Here’s your gift: The Browns’ only score of the first half was gifted by the Ravens, and the officials. First, a Mayfield throw-it-up interception on a broken fourth-down play was erased when Marcus Peters was called for holding (v. Beckham). On the next fourth down, Kitchens eschewed a field goal from fourth-and-1 from the Ravens’ 23, and safety Chuck Clark jumped offsides. Then, on third-and-5 from the 13, Mayfield’s fade for Beckham in the left corner of the end zone sailed three feet out of bounds, but Jimmy Smith was called for pass interference. Ravens coach John Harbaugh challenged the play, but it stood. Mayfield threw for Demetrius Harris from the 1 for the touchdown.

6. Oops: After the Browns TD, Austin Seibert missed the PAT wide left. It was the first miss of any kind by Seibert toward the closed end zone in FirstEnergy Stadium. Seibert redeemed himself with a 47-yard field goal toward the Dawg Pound in the third quarter. Those points were saved by a replay reversal of a Mayfield interception by L.J. Fort on third down. Replays showed Fort trapped the ball on the ground.

7. Always something: After a 22-yard reception that took him into the Baltimore bench area, Odell Beckham Jr. was penalized for taunting when he flashed the Little Rascals “hello” sign (back of hand to chin and wiggling fingers). Later on that possession, the Browns were intending to go for it on fourth-and-5 from the Baltimore 47. But they had to call timeout because Beckham was late returning from a long route. After the timeout, they punted.

8. Wait ‘til next year: The Browns’ 2020 opponents are almost 100 percent set. With a week to go, there is only one uncertainty. The division rotation calls for the Browns to play the AFC South and NFC East, and the third-place finishers of the AFC East (road) and AFC West (home). So it’s looking like this: Home games – Indianapolis, Houston, Washington, Philadelphia, Denver/L.A. Chargers/Oakland. Road games – Tennessee, Jacksonville, N.Y. Giants, Dallas, N.Y. Jets. There are the usual home-and-road games against Pittsburgh, Baltimore and Cincinnati, of course. Dates and times of the complete schedule are announced in April.