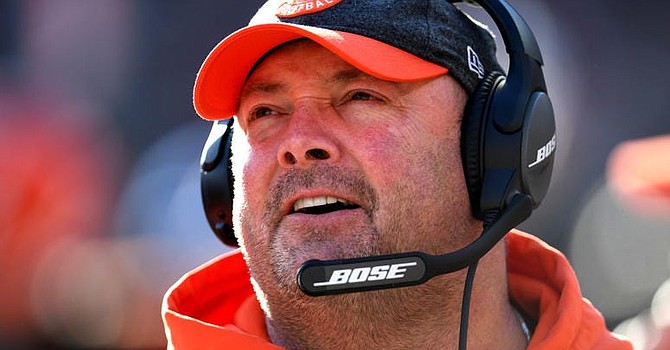 Cleveland falls to Cincinnatti in the season finale, dropping to 6-10 in Freddie Kitchens 1st year as HC. (92.3 The Fan - Radio.com)

Instant takeaways from the Browns’ 33-23 to the Cincinnati Bengals …

1. Now what?: With perhaps a chance to save the job of their embattled if likeable coach, the Browns were humiliated by their Ohio rivals and lost, 33-23. So they finished with three straight losses to end the Season of Great Unmet Expectations with a 6-10 record. It was the 10th consecutive season the Browns failed to win their last game. Now everyone waits for owners Dee and Jimmy Haslam to announce the fate of first-year coach Freddie Kitchens. Prior to the game, speculation Haslam’s reaction to this disappointing season ranged from minor changes to a complete organization blow-up. Nobody from the Browns has gone on the record to indicate what’s about to happen.

2. Viva, OBJ: Saddled by food poisoning late in the week, Odell Beckham Jr. was largely silent throughout the game – except for three big plays for 36, 25 and 20 yards – to eclipse 1,000 yards receiving on the year. The last play was classic OBJ. Mayfield had taken the ball to the Bengals’ 5 on a keeper for 11 yards. Then he suffered a sack, a dropped interception, and a sack back to the Bengals’ 20. On fourth down, Mayfield threw it up for Beckham in the right corner of the end zone. Beckham soared above Darius Phillips, who had two interceptions, and reached with both hands for the ball while quick-stepping both feet in bounds. Of course, the defense allowed the Bengals to go down field for a clinching field goal. The official right there initially signaled no catch, but he was quickly over-ruled. Beckham finished his first season with the Browns with 74 receptions for 1,035 yards and four touchdowns.

3. Terrible third: In the third quarter, the Browns ran six plays for minus-7 yards offense, and Mayfield threw an interception.

4. Effort lacking: After taking a 7-0 lead, the Browns allowed 20 unanswered points. It was an incriminating display of poor effort on offense and defense. On Cincinnati’s first touchdown drive, safety Damarious Randall whiffed on a tackle attempt during a 41-yard run by Joe Mixon. Next defensive series, safety Sheldrick Redwine missed Mixon on an open-field tackle attempt during a 21-yard run, and Randall dropped an interception on a short throw by Dalton. After that, Mayfield threw way short for Jarvis Landry, who slipped and fell, anyways. Mixon then scored on a 3-yard run against a Browns’ defense fielding only 10 players. During this sequence, the Browns forgot they were playing against the 32nd-ranked defense against the run. The Browns’ third failed drive in a row led to the Bengals third touchdown series, climaxed by Dalton’s 5-yard run around the left edge and dive for the end zone pylon. For the half, the Browns handed off eight times to Chubb for 21 yards and twice to Kareem Hunt for four yards.

5. Where ya been?: Buried in a 20-7 hole, the Browns dusted off a no-huddle, up-tempo attack. Two quick completions of 26 yards to Landry and 36 to Odell Beckham Jr. took the ball to the Bengals’ 17. After a 3-yard run by Nick Chubb, Mayfield had to throw away the ball on second down to avoid a sack and then was swarmed for a 10-yard sack by Carl Lawson, setting up Austin Seibert’s 42-yard field goal.

6. Home run: Mayfield connected for his second home run in the second quarter, hitting Landry for a 56-yard touchdown down the middle of the field. Seibert pulled the extra point wide left. Cincinnati’s Randy Bullock banged the left upright on his second PAT try earlier. The two long balls accounted for 102 of Mayfield’s 193 passing yards in the first half. Minus those, Mayfield was 4 of 13 for 91 yards.

7. Take a bow: With several personal milestones at stake, Damion Ratley stole the show early. On the third play of the game, Ratley raced past two Bengals defenders and caught Mayfield’s bomb of 46 yards in the end zone. It was the second-year receiver’s first career touchdown. The play was set up by D’Ernest Johnson’s return of 47 yards with the opening kickoff. That was a season-high return for Johnson.

8. Auld lang syne: Whatever sin Rashard Higgins committed this season stayed with him longer than reaching for the fruit did Adam and Eve. Higgins was made inactive as a healthy scratch for what clearly was his last game as Brown. He will be an unrestricted free agent in March. Higgins had only four catches in his “walk” year. His last reception stood as the winning touchdown against Buffalo on Nov. 10. That game-winner – the only time in five tries that Mayfield has completed a winning or tying drive in the fourth quarter this season – stemmed a four-game losing streak in the middle of the season and ignited hope of a belated playoff run. It was not to be. Another player deep in the dog house, tight end David Njoku, was made active, ending a streak of consecutive healthy scratches for him. Njoku is under contract through 2020 and probably will be shopped in a trade this offseason. Njoku did not get on the field in the first half.