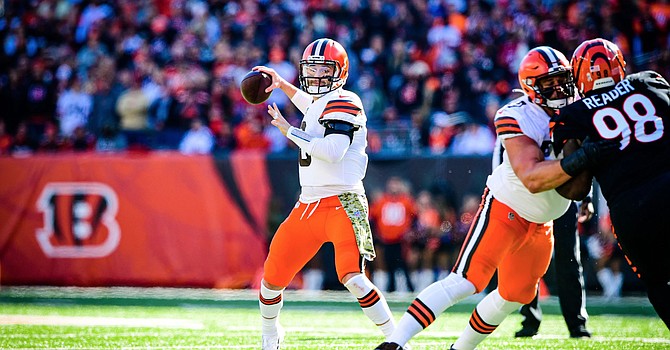 Baker Mayfield amassed a perfect passer rating of 158.3 in the first half with 7 of 8 passing for 121 yards, including a 60-yard bomb for a TD to Donovan Peoples-Jones. (Cleveland Browns)


3. Chase struggles: Runaway offensive rookie-of-the-year favorite Ja’Marr Chase had a terrible game. In the first half, Chase was involved in two offensive turnovers that resulted in 10 points for the Browns. Chase was the intended receiver on Denzel Ward’s 99-yard Pick 6. The pass was behind Chase, but his fall at the goal line gave Ward a great jumpstart on his long return. In the second quarter, Chase lost the ball after a catch on a hit by safety John Johnson. The ball was recovered by cornerback A.J. Green, resulting in a short field goal. Chase’s troubles continued in the third quarter when a Burrow pass for him was deflected by closely-covered Denzel Ward and intercepted by Johnson. That led to another short field goal. Still more: At the end of the third quarter, a perfect Burrow pass from the 23-yard line whistled through Chase’s hands in the end zone with Greg Newsome in coverage but beat by a split-second. Wait, there's more: In the fourth quarter, Chase beat Newsome deep. Alas, a potential 77-yard touchdown was blown when Chase dropped the ball. When Chase finally secured a 32-yard reception later, it was nullified by a Bengals holding penalty. Welp.