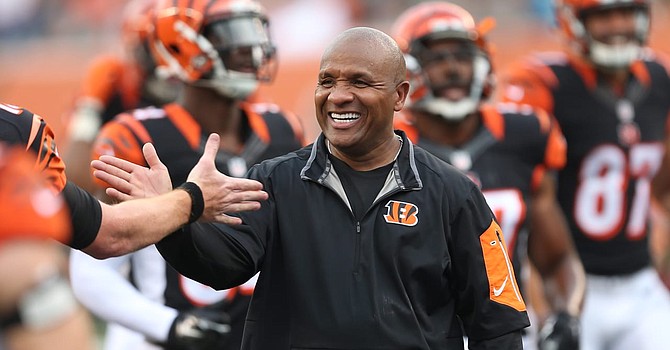 Hue Jackson's defection to Cincinnati spiced up the Battle of Ohio in 2018. (Bengals.com)

When we last saw the Bengals, the Battle of Ohio was reignited as a rivalry again – thanks to Hue Jackson and Baker Mayfield. When Jackson defected to the Bengals to sidle up to Marvin Lewis as a special assistant after his firing in Cleveland, Mayfield took offense. The quarterback refused Jackson’s dap before and after a Browns 35-20 route in Cincinnati, and then icily stared down Jackson while celebrating a a 66-yard catch-and-run by David Njoku in a 26-18 cakewalk in Cleveland. The sweep of the Bengals was the Browns’ first since 2002. And even though neither game was competitive, Mayfield’s histrionics toward Jackson added spice to a long-dormant division rivalry. A year later, the Bengals replaced Lewis with Sean McVay protégé Zac Taylor, leaving Jackson without an NFL team. And Mayfield lost his personal punching bag.

Second down: Don’t start your engines.

The demoralizing loss in Pittsburgh has reduced the Browns’ playoff chances to between 4 and 6 percent, depending on the analytics Website you prefer. Pittsburgh (7-5), Tennessee (7-5), Indianapolis (6-6) and Oakland (6-6) are all ahead of the Browns in the slog to the AFC sixth playoff seed. While the playoff chances are slim, the motivators to finish as high as 5-1 in the division and 9-7 overall should keep the Browns from starting their engines for a mad dash into vacation mode. “First, we haven’t been eliminated, so there’s still that chance, so I don’t think anybody’s heading for the exits,” center JC Tretter said. “And I was here for the 0-16 team, and there weren’t really guys quitting at that time. So I think a team of our caliber and where we stand right now where we still have chances at postseason opportunities, I don’t think guys would be thinking about that … but if someone was, I think we have plenty of guys here to correct it.”

Third down: Next men up.

Offensive line has been a concern all season for the Browns and it could be shorthanded on Sunday. Center JC Tretter and right tackle Chris Hubbard were limited throughout the practice week with knee injuries. On Friday, coach Freddie Kitchens said the availability of both could come down to game time. Tretter would be replaced by Eric Kush, who was replaced by Wyatt Teller at right guard six weeks ago. Hubbard would be replaced by Kendall Lamm, who hasn’t been active for a game since the opener. It so happens the Bengals’ defensive front is their one position group that make an offense nervous. Left end Carlos Dunlap is coming off a three-sack game and tackle Geno Atkins remains one of the league’s consistent defensive forces inside. The Browns did receive one break when second-year end Sam Hubbard (five sacks) was declared out with a knee injury.

Despite their 1-11 record, the Bengals do lead in one overlooked category – their special teams are ranked No. 1. They received a blow, however, when kick returner Brandon Wilson was placed on injured reserve. Wilson was leading the NFL with a 31.3-yard return average, including a 92-yard touchdown, and was the Bengals’ leading tackler on punt coverage. Still, a team that’s 1-11 is liable to do anything to affect a close game, and the Bengals’ special teams are capable of pulling off a surprise.