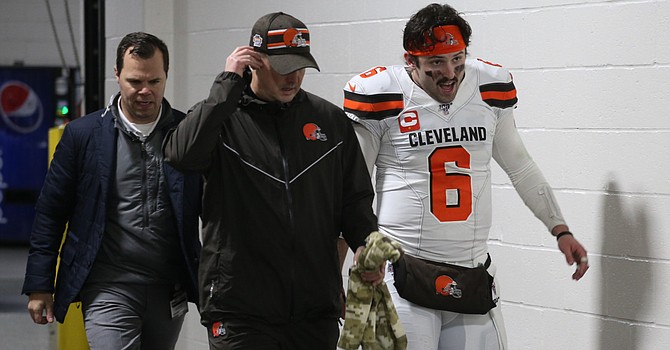 Baker Mayfield wore a glove for the 2nd half at Heinz Field as the Browns fall to the Steelers 20-13 (Sports Illustrated).

1. That’s a wrap: The Steelers started it, and they ended it. Undermanned on offense, they beat the Browns with a third-string quarterback nicknamed Duck, extending their Heinz Field winning streak to 16 years and putting the Browns out of their misery. The Browns blew a 10-0 lead by giving up Pittsburgh touchdowns at the end of the first half and beginning of the second half. Then they blew their only defensive turnover in the fourth quarter, failing to score from the Steelers’ 30-yard line. Baker Mayfield played the second half with a glove on his throwing hand after an injury in the final seconds of the first half. The Browns’ loss was sealed on a Joe Haden interception at the Steelers’ 39 with 1:06 to play. Mayfield was 18 of 32 for 196 yards. Devlin Hodges threw for 212 yards on 14 of 20 completions. The 20-13 Pittsburgh win keeps the Steelers alive for the AFC wild card with a 7-5 record. The Browns fell to 5-7 after their first loss in the AFC North. Attention now figures to return to the future of Freddie Kitchens as head coach.

2. Finally: A run of 20 unanswered points by the Steelers finally was broken with a 34-yard field goal by Austin Seibert with 7:30 left in the fourth quarter. Mayfield completed three good throws to get the Browns to the red zone. Of course, that’s where the drive bogged down. A sack on third down from the 14 resulted in the field goal and the Browns behind, 20-13. The Steelers did the Browns a huge favor by having Devlin Hodges throw deep on first down, and it was intercepted by Terrance Mitchell. But the Browns wasted the turnover and pooch-punted from the Steelers’ 37 after another Mayfield sack.

3. Double dip: The Steelers scored last in the first half and first in the second half to turn a 10-0 deficit to a 17-10 lead. Gaining confidence with every throw, Hodges beat Denzel Ward with a perfect throw of 44 yards to James Washington and then induced a pass interference by Ward on a fade for Deon Cain in the right corner of the end zone. Benny Snell powered over from 1 yard for the touchdown.

4. Feeling half-empty: The Browns dominated everything in the first half except the score. They held the ball almost twice as long as the Steelers. They rushed for 91 yards. They even won a coaches challenge. And yet, they left the field at halftime, tied at 10-10.

5. Ouch: The worse thing about the half was Mayfield walked off the field with seven seconds left and then sprinted to the locker room with an injury to his right hand. Mayfield’s hand was hit after a deep throw by the helmet of linebacker Bud Dupree, who was also grabbing Mayfield’s face mask at the time. Why the Browns were bothering to throw was another question. After a muffed kickoff by Tavierre Thomas, they took over at their 7-yard line with 55 seconds left. Two 16-yard runs by Kareem Hunt inspired the Browns to call timeouts and try a couple deep balls for double-covered Odell Beckham Jr. They got as far as their 36. Would have been better off handing off to Hunt and burning the clock.

6. Sign of life: The Steelers’ offense was predictably bad until Duck Hodges cobbled together a touchdown drive in the final 3 minutes. He connected on passes to James Washington (6 yards), Tevin Jones (28), and then to Washington for the touchdown (30). Hodges beat a blitz and Washington made a great catch while T.J. Carrie was pulling him down and safety Sheldrick Redwine was running toward him.

7. Squandering: The Browns committed to the run from the start and marched downfield for 13 plays and 7 ½ minutes with the opening possession. It bogged down after a stupendous, parallel-to-the-ground sideline catch by Jarvis Landry took them to the Steelers’ 11. The play originally was ruled no catch, but Freddie Kitchens’ challenge was successful (he’s 2 of 7 now on challenges). After the catch, there was a Pittsburgh offsides followed by two negative plays and incompletion.

8. Kareemed: The Browns went up, 10-0, on a short pass to Hunt, who barreled through Minkah Fitzgerald’s tackle attempt and completed a 15-yard touchdown play. At that point, the Steelers had run eight plays for 9 yards, were down by 10 points, and were being booed.

9. Tee wars: The photo of Freddie Kitchens wearing a Tee-shirt saying “Pittsburgh Started It” went viral on Saturday. The Steelers expressed themselves, also. Several players reported to Heinz Field wearing a black hooded sweatshirt with the message “Free Pouncey.” That was in reference to center Maurkice Pouncey serving the second of his two-game suspension for participating in the melee at the end of the Nov. 14 game. Also, Steelers nickel back Cameron Sutton wore a white Tee with a caricature of an imp in a Steelers helmet peeing on a Browns player on the ground.