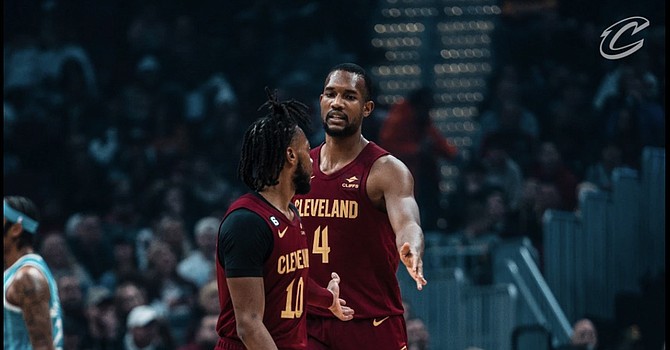 No, the Charlotte Hornets aren’t going to be a team that Cleveland Cavaliers potentially see this April or May in the playoffs, but they are the team that the Cavs needed to see on Friday night.

The Cavs snapped their five-game losing streak with a 132-122 double overtime win over the Hornets at Rocket Mortgage FieldHouse.
There’s a lot to unpack from this one, but the word that comes into focus is growth.

That’s a word that All-Star guard Donovan Mitchell uttered some variation of nine times during his postgame interview inside the home locker room. It’s a word that doesn’t always encapsulate good feelings, but is certainly one that’s necessary for this Cavs team. It also serves as a reminder – both good and bad – that there’s plenty of growing left to do for the team that now sits at 9-6 on the season.

Cleveland was on the cusp of a win that it could have felt mostly good about. The Cavs led by 10 points with 52.4 seconds remaining in regulation. Typically, that situation is just a formality. Sure, the Cavs hadn’t played their best game to date against a bad Hornets team, but wins in the NBA can be hard to come by, and after losing five straight games, the Cavs needed to snap that skid. As Mitchell’s second free throw splashed through the net, the Cavs could at least feel good about winning a game, even if there were still a number of things to clean up.

Instead of that being the story of Friday night, the next 52.4 seconds unfolded as such.
In that span of 12 plays, the game went from a 103-93 lead for the Cavs to a tie game at 105, sending the game to overtime.

In those 52.4 seconds, the Cavaliers coughed up another lead, with each seemingly performance down the stretch worse than the last. In a short season that has featured several head scratching finishes, Friday night is hands down the most unlikely.

It’s hard to call anything a problem in the middle of November for a team that’s still learning how to play together. Things like the late-game issues the Cavs are having are expected to be worked out over time. Nights like Friday against the Hornets are part of that process. It’s a learning experience, just as each of the five losses the team just endured are.

How long does the team’s shaky ability to close out games remain as a learning experience, though?

“I can't give you a timetable,” Mitchell said when asked about that. But that's a good question. I think, for us, I would like to say we learn, but there's always gonna be another time. But, I think the biggest thing we take away is the way we executed in the second overtime, can that be the fourth? You take it day-by-day with that. Game-by-game, just minute-by-minute, possession-by-possession. I can't say down the line, obviously, if we're in April and we're having this problem, then yeah, it's a problem.

“You can practice it all you want, but at the end of the day you gotta be able to be out there in those situations, live situations, how do you react and not just kinda playing back and forth. I think the biggest thing is we're continuing to grow. Always positive, no negatives. But I think for us it's just gonna be a continuous learning process and continuing to grow because at the end of the day we all want to be better. But, like I said, if we're at playoff time and this is happening, then I guess you could say that's a problem.”

In fairness to the Cavaliers, it is only November. There’s a long way to go before the team is playing in the high stakes games it expects to be in. It also was just the eighth game that both Mitchell and Garland have played in together. That’s something that matters immensely. Learning how to close games out as a duo is something that’s happening on the fly for them, and it’s really the only way it can happen.

It just shouldn’t be as extreme has it has been at times.

There is a bit of hope that can be taken away from the second overtime period that led to the win for the Cavs. Cleveland outscored Charlotte 12-2 in that five-minute stretch. In the moments during the game in which things tightened up, that was when they were at their best offensively.

This period could serve as a blueprint of sorts for how the Cavs should be operating late in games.

“You look at the second overtime, look at the way we executed,” Mitchell said. “It's like ‘alright cool, we have this, we have that, and then we can add things to it.’”

The Cavs needed to figure things out, and they needed the win even more than that.

“They just figured out a way,” Cavs head coach J.B. Bickerstaff said of the second overtime. “Everybody who was on the floor, made a play. It was shots, it was stops, it was rebounds, assists. I just thought that there was a will and a determination. And, sometimes it comes to this. Sometimes you just have to get it done, and it's gonna be ugly. But you can learn from it.”

On a night in which Mitchell and Garland combined for 75 points on just 48 shots it would sound odd to say that neither of them was the best player on the floor for the Cavs.

It doesn’t seem as odd when considering what big man Evan Mobley did on Friday night. His final stat line was outrageous: 21 points on 9-of-14 shooting, 18 rebounds, five assists, two blocks, and a steal.

Even those numbers don’t tell the whole story.

Simply put, he was dominant, he was clutch, he was a monster that the Cavs needed on Friday night.

One of the biggest plays that Mobley made came near the end of the first overtime. Mitchell missed a 3-pointer from the right wing, but Mobley corralled the offensive rebound and fed a perfect pass to an open Garland for the game-tying 3-pointer with 13.1 left on the clock.

Pretty big rebound by Mobley and an absolutely perfect pass to Garland for the game-tying three at the end of OT1.

Mobley: "I got the rebound, I could've shot it, but I knew we needed a three. So I saw Darius, he was calling for it too, so hit 'em and he knocked down the shot." pic.twitter.com/har8ifIBSD

"I got the rebound, I could've shot it, but I knew we needed a three,” Mobley said. “So, I saw Darius, he was calling for it too, so hit 'em and he knocked down the shot."

He followed that up by shutting off Rozier in isolation and sending the game to a second overtime.

Evan Mobley's defense on Terry Rozier at the end of the first overtime was textbook. He couldn't have played it much better than he did. Forced Rozier into a super tough shot. pic.twitter.com/a5jRupdVes

“I was just really just keeping him in front,” Mobley said of that stop. “I knew he likes stepback threes a lot and a lot of stepbacks, so I was just giving him a good amount of space, using my length and I knew I could slide my feet and I'm pretty fast. So, I was just using my length, and when he shot it, just get a good contest.”

“Evan was kind of angry tonight,” Garland said after the game. “I loved it. We always tell Evan that he is the man, he’s him. I want him to start acting like it.”

Prior to things coming apart at the seams late for the Cavs and needing some heroics from Mobley, he did have one of the more impressive plays of the season defensively.

I mean, this is just insane. It's not *just* that Mobley snatches a layup attempt out of the air. Look where he is when Rozier starts his gather. Just an absolutely bonkers play. pic.twitter.com/ORxkzat7bk

It's hard not to be impressed with what Mobley is able to do, especially defensively. The stats aren’t always going to show how impactful he is on the game, just as his impressive box score from Friday night only begins to tell the story.

This can also serve as a way to help ease the minutes that are being played by Mitchell. He’s near the top of the league in minutes per game as things stand right now.

As for the starting lineup itself, when Dean Wade returns from his injury, he might be the player that makes the most sense as the starting small forward. For now, Stevens has earned the minutes.

Moving LeVert out of the starting lineup doesn’t mean that he won’t be able to play starters minutes or with the foursome of Mitchell, Garland, Mobley, and Allen. LeVert actually played more minutes than Stevens in the win on Friday night, and it’s worth noting that he started and played the full second overtime period with that group.