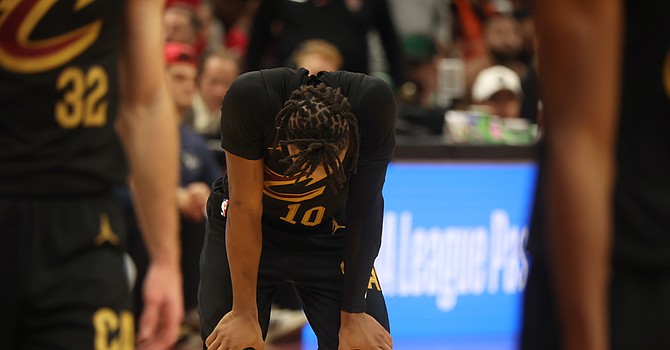 Danny Cunningham covers the Cavaliers for 850 ESPN Cleveland and TheLandOnDemand.com

After a great start to a five-game road trip, the Cavaliers will return home on a three-game losing streak after falling to the Warriors 106-101 at Chase Center out in San Francisco.

The Cavaliers could have come home from their first west coast swing of the season with the best record in the NBA and feeling great about themselves.
Instead, the team was unable to close out wins against the LA Clippers, Sacramento Kings, and on Friday night, the Golden State Warriors. In all three losses the Cavs had this week out west, they were either tied or in the lead with three minutes remaining in regulation. From that point on, the Cavs were outscored by a combined 43-15 during closing time.

It’s silly to press the panic button on a team that has gone 8-4 over the first 12 games. Even the last three losses as a whole aren’t something that’s worthy of panicking over. With that said, there are red flags that could become a much more serious issue later in the season if they aren’t fixed.

Of the things that have gone wrong, the offense down the stretch of games is what has to be most concerning right now for Cleveland. On that end of the floor the Cavs don’t look to all be on the same page at the time when it’s most important to be. Too often they find themselves not getting into any meaningful action until the shot clock reaches single digits, if they’re even able to at all. On Friday night, that was very clearly a major issue.

Donovan Mitchell had 10 of his 29 points in the fourth quarter, but the ball isn’t in his hands enough. He did attempt five free throws – one of which the result of a technical foul – in the final period, but he only had two field goal attempts in the final four minutes of the game.

When things bog down at the end of games, the Cavaliers look like a team that doesn’t know where the ball is supposed to be. Having four All-Stars on the floor at the same time – especially two of them at the guard positions – can lead to that. The sooner they realize that crunch time needs to be Donovan Mitchell Time, the better off the end of game offense will look.

Mitchell is the team’s best player, and there’s no question of that at this moment. The sooner that becomes abundantly clear down the stretch of games, the better off the Cavs will be at closing them out.

The Cavaliers were without reserve forward Dean Wade on Friday night with right knee soreness which meant the bench lineups were going to look a little bit different. Head coach J.B. Bickerstaff shortened his bench, only playing Kevin Love, Cedi Osman, and Isaac Okoro off the bench. Love didn’t have a great game, but finished with nine points and seven rebounds in 22 minutes.
Okoro and Osman combined to score four points in 39 minutes on 1-of-9 shooting.

That’s not going to get it done.

Osman has been a player who has always seemed to be a bit erratic and streaky. Right now, he’s not shooting the ball well. After his hot start from 3-point range, he’s just 9-of-31 (29%) in his last nine games. There will be a point where Osman will get hot again and average 15 points throughout the course of a week or two. That’s who he is as a basketball player.

Okoro is a different story, however.

After a promising preseason, Okoro is becoming harder and harder to play for the Cavs. His minutes have been very up-and-down, losing less than eight minutes in games against Boston, Los Angeles, and Sacramento over the last two weeks. On Friday night he played 18 minutes against the Warriors, partially due to Wade being out.

While Okoro is thought of as an above-average defender, he’s not an All-Defense level type of player. He’s good, but not great. The level of defense he’s playing isn’t good enough to justify the Cavs essentially playing 4-on-5 offensively while he’s on the floor. This season Okoro has yet to make a 3-point basket and is hesitant to even attempt them. He's 0-for-12 on threes.

After the loss to the Warriors, Okoro is now 6-for-29 on field goal attempts this season that are not dunks. Entering the game against the Warriors, the Cavs were only scoring 95 points per 100 possessions with Okoro on the floor, 20 points worse than the team’s mark as a whole.

Right now there may not be other options instead of Okoro, but for the time being having him on the floor is certainly a problem for the Cavs.
What’s going on with Garland?

Garland has had a season to forget so far for the Cavs. He missed two weeks with a laceration of his left eye lid suffered on opening night in Toronto, and hasn’t been able to find a groove since returning. For him, it’s been one thing after another.

In Garland’s first game back against Boston last Wednesday night, he finished with 29 points and 12 assists in an overtime victory. In that game Garland also tweaked his knee, causing him to miss last Friday night’s game in Detroit. His return against the Lakers was a fine performance, but his last three games – all Cavs losses – have certainly left something to be desired. On Wednesday night in Sacramento, Garland was 1-of-9 from the floor and finished with six points in the loss. Friday against the Warriors he finished 5-of-19 for 15 points.

It isn’t even that Garland is playing horribly, it’s that he’s not playing up to his All-Star standards. Fair or not, that’s what’s going on.

It is worth noting that he did tell reporters on scene out west that he played through an illness against Sacramento. Of course, the knee stuff could still be lingering too.

The goal for tonight wasn’t to be super negative about the Cavs, even if the things above certainly warrant it. With it being very early on a Saturday morning, it’s worth highlighting the fact that the Cavaliers did have an improved defensive effort on Friday night against the Warriors.

After poor performances against both the Kings and Clippers (and half of the Lakers game), the Cavs looked much more like a team that should finish around the top five in defense at the end of the year. Sure, Steph Curry went off for 40 points, but the Cavs did a relatively good job of limiting some of the help around him. There are still things to clean up, and they didn’t play 48 minutes of good defense, but there were moments worth celebrating in the game.

Thought that this possession was the best one the Cavs had defensively on the entire west coast swing. Forced a shot clock violation here. pic.twitter.com/MjySybkn5m