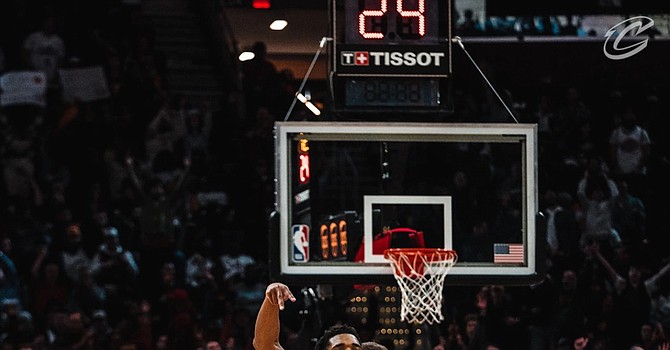 The Cleveland Cavaliers blew a golden opportunity on Monday night in Los Angeles, instead, the team collapse down the stretch against an undermanned LA Clippers team, losing 119-117.

Cleveland was leading 112-100 with 4:37 left in regulation, from there on, the team was outscored 19-5 and fell apart on both ends of the floor.

In the grand scheme of things, a loss in November in the third game in four nights, no matter the way it happened, isn’t a big deal. This loss shouldn’t cause anyone to ring the alarm bell or slam on the panic button. After all, the Cavs fall to 8-2 through 10 games. They’re in a great place, even with a disappointing loss to the Clippers.

With that said, there were things that the Cavs must learn from that happened during the loss on Monday night.

Mitchell finished with a game-high 30 points on a very efficient 10-of-15 shooting (8-of-11 from 3-point range). The issue with Mitchell’s game wasn’t necessarily anything he did, but rather the fact that he didn’t record a field goal attempt in the final seven minutes of the game.

Mitchell was brought to Cleveland to be the team’s best player – specifically early in his tenure – and to be the guy that closes out games. There cannot be a situation where the Cavaliers are in a close game and Mitchell isn’t a big part of the offense in the fourth quarter. No matter what the Clippers did defensively against him, the ball didn’t seem to find his hands often enough down the stretch.

Fellow All-Star guard Darius Garland struggled down the stretch. He finished the fourth quarter with three points and three turnovers. Garland was 1-of-4 shooting in the game’s final period. In the final five minutes of the game, just about everything the Cavaliers did offensively was subpar.

It’s fair to think that most nights Garland will be better down the stretch and Mitchell will be more involved. Monday night’s performance wasn’t good enough to earn a victory on either end of the floor, but another basket or two at any point during the final four minutes likely puts this game out of reach and gives Cleveland its ninth straight victory. Instead, Cleveland is saddled with its first bad loss of the season.

One of the reasons that the Clippers were able to keep this game close was their ability to knock down the 3-point shot, especially early on. LA certainly has a number of guys capable of making those shots, but defensively the Cavaliers didn’t do much to prevent it from happening early on.

The Clippers scored 31 points in the first quarter in large part due to the fact that eight of their 11 made baskets came from behind the 3-point arc. Many of the shots the Clippers were attempting weren’t exactly closely guarded ones. Some of them were, but more of them were shots that quality NBA shooters should knock down regularly, and the Clippers did that.

LA finished the game 17-of-38 from 3-point range but relied on it less as the game went on. In the fourth quarter, the Clippers only made one 3-point basket on six attempts.

Early on, the Clippers didn’t seem to have much interest in the game. Just like for the Cavs, it was LA’s third game in four nights and the second night of a back-to-back. Cleveland got off to a 6-0 start prompting a timeout by Clippers head coach Tyronn Lue less than 90 seconds into the basketball game.

LA looked like a team on the second night of a back-to-back until it started making shots from the outside. Austin Carr and Brad Daugherty made the point on the Bally Sports Ohio broadcast that once LA started to connect from the outside, things picked up on the other end of the floor for the Clippers, too. That led to a strong second quarter and the Cavs were in for a dogfight the rest of the night.

It wasn’t all bad on Monday in Los Angeles for the Cavaliers. Despite the loss, this was the best offensive game of the year for second-year big man Evan Mobley. He had a season-high 26 points on 12-of-18 shooting.

The Cavs got the ball to Mobley in plenty of places where he appeared to be comfortable with it and it showed. This was partially due to the fact that he’s a really tough matchup for the Clippers, especially LA’s starting lineup, but it’s a good sign either way.

This is the type of Mobley that the Cavs need to unlock more of offensively. He doesn’t need to lead the team in shots on a nightly basis like he did on Monday, but unlocking him like this will be very beneficial for the team as the season continues on.