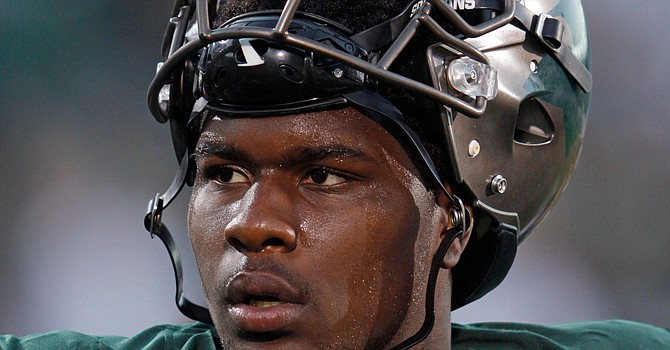 The Browns are giving 2017 second-round pick Malik McDowell a chance to revive his once-promising NFL career. They signed the former Seattle Seahawks draft pick, 24, despite not playing after three years of injuries, arrests and a prison term. (Detroit Free Press)

More takeaways from the NFL draft …

McDowell never played in an NFL game after first suffering injuries in an ATV accident a few weeks before his first NFL training camp. What followed was a series of more serious setbacks: multiple arrests over two years, NFL suspension, and an 11-month prison sentence in November of 2019.

With the injuries healed and his legal issues seemingly behind him, McDowell displayed his athleticism at the College Gridiron Showcase in Fort Worth, TX, in January.

McDowell, who will turn 25 in June, is represented by agent Drew Rosenhaus.

Berry issued the following statement when the Browns announced the signing of the former Michigan State defensive lineman:

“We are certainly aware of Malik’s past, as we have done extensive work on him for the last two months. He is accountable for his actions and has had to live with the consequences for decisions earlier in his life. We believe Malik is in a good place, personally and medically. He has taken the necessary steps to get on a healthy path, and has learned from his experiences. Malik understands the expectations we have of him as he attempts to make our football team. He is committed to taking advantage of the support network in place to become the best version of himself—both on and off the field—and we will support him as he attempts to make his return to football.”

McDowell, 6-6 and 280 pounds at his workout, slimmed down from his college weight of 295 at the 2017 NFL Combine, could be a versatile end/tackle.

All of this comes after Berry drafted Ohio State defensive tackle Tommy Togiai in the fourth round on Saturday.

2. After viewing this profile of Anthony Schwartz, I’m feeling it’s possible the under-used receiver from Auburn may be viewed in 2-3 years as one of the steals of the 2021 draft.

Interestingly, the Browns propped up new front office addition Kwesi Adofo-Mensah, VP of football operations, to speak to the media about Schwartz on Friday night.

“We try and find ways to shorten the field and make it easier for the offense to finish off drives,” said Adofo-Mensah, who was the Princeton University addition to the Browns’ Ivy League football operations team. “Players like him are that type, and they can do it multiple ways. They can do it through vertical routes and they can do it with the ball in their hands when you give it to them in space so that is why we like him, and obviously, players like Tyreek Hill are no different.”

3. Incidentally, Schwartz’ selection was supposed to be announced on the NFL draft stage by entertainer Machine Gun Kelly, who lived in Cleveland during some of his teen-age years.

Kelly turned the honor, however, into an unforgettable mic-drop highlight of the NFL’s fabulously-choreographed draft production.

4. I am a little skeptical of the Browns’ run defense with so much emphasis on under-sized linebackers and the expected use of a third safety at the expense of a third linebacker.

I also see the wisdom in the Browns refining their defense with containing quarterbacks Lamar Jackson and Patrick Mahomes in their minds. These two, mobile, super-talented, playmaking quarterbacks are the John Elway of this generation, in regards to the Browns. They are the QBs the Browns will have to defeat over the next 5-7 years in order to reach the Super Bowl. Speedy linebackers and an extra safety improve the chances of containing them.

Logic would say protecting star-in-making QB Joe Burrow with the best blind-side tackle in the draft should have been the Bengals’ first option.

But my entire career covering the NFL I’ve heard everyone doubt the Bengals on just about everything they do. The truth is, they have always been one of the sharpest organizations in not only recognizing offensive talent, especially receivers, but also in stubbornly pursuing it – long before it was fashionable.

Chase is my prohibitive favorite to win offensive rookie-of-the-year honors after reuniting with his college quarterback and joining receivers Tyler Boyd and Tee Higgins. This is also why it was imperative for the Browns to draft a starting-caliber cornerback in the first round.

By the way, the Bengals did draft offensive linemen in the second and fourth rounds.

6. The Ravens get the benefit of doubt because they have been the best drafting team over 25 years. Name another team that has picked future Hall of Famers in the same round in that time (Jonathan Ogden and Ray Lewis in 1996).

Which makes their blind spot in drafting receivers impossible to explain.

This year marked the fourth draft in a row the Ravens selected a pair of wide receivers (Rashod Bateman, first round; Tylan Wallace, fourth round) since turning over the offense to quarterback Lamar Jackson in 2018. The team’s blind spot extends to the franchise’s rebirth in Baltimore in 1996 with the great Ozzie Newsome as GM.

In 25 years, the Ravens have selected 32 wide receivers in the draft. The only ones to make the Pro Bowl were Jermaine Lewis as a kick returner in 1998 and 2001, and Darren Waller as a tight end with the Las Vegas Raiders last year.

7. Similar to the Bengals, the Steelers received some criticism for eschewing offensive line help with their first pick in the draft. Instead, they went against the grain and drafted Alabama running back Najee Harris to boost their non-existent running game.

It should be noted the Steelers drafted a center and offensive tackle with their third and fourth picks.

So don’t write off the Steelers just yet. Not everything can be accomplished in the first round.

Their formula better be right, however. If they don’t rediscover a running game, Ben Roethlisberger might not make it through the 2021 season healthy.