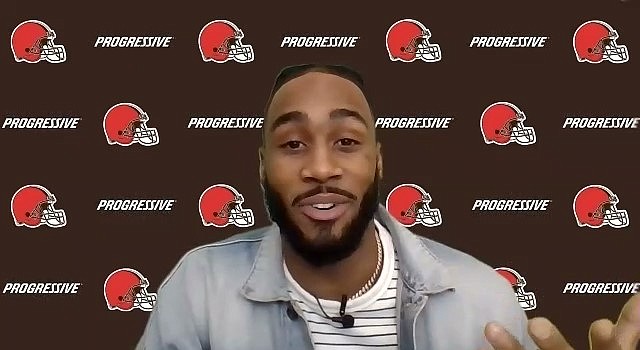 Safety John Johnson III was the No. 1 target of Andrew Berry in free agnecy. (Cleveland Browns)

Takeaways from the first week of NFL free agency …

Wow! That was fast.

Free agency in the second year of the GM Andrew Berry and coach Kevin Stefanski era has come … and pretty much gone.

One week and it’s pretty much over.

Now, there may be a few more one-year deals from now through training camp. Maybe even a re-signing. But the heavy lifting is over. And the Browns are better.

In his second transaction season, Berry had $24.36 million in salary cap room v. $61.5 million in his first season. He was able to make the defense younger and faster – while still sprinkling in some experienced hands -- and he kept the offense intact.

Berry set up his draft so that no position need is absolutely urgent above any other one. The Browns can still justify taking a defensive end or cornerback first – in either order. After that, he can draft for depth at offensive line, wide receiver, linebacker and more cornerbacks.

The natural order of roster change will take place. But the bulk of the team that broke down so many franchise barriers and won 12 games returns to a coaching staff and system unchanged from 2020.

Yes, the Browns are killing it.

Here is a rundown of what Berry has done so far in the new season.

Berry’s No. 1 target provided defensive coordinator Joe Woods with a tremendously versatile safety who can enable Woods to deploy a three-safety base alignment. When everyone is healthy, Johnson, Grant Delpit and Ronnie Harrison can be interchanged in various positions on the field that should baffle quarterbacks and improve the deep defense against the pass.

McKinley’s potential as a 2017 first-round pick has not been realized. But Berry believes a change of scenery and a quality coaching staff will continue his maturation into a bona fide pass rush complement to Myles Garrett.

One of the best inside cornerbacks for several years, the Youngstown native has the ability to start on the outside and ease the return of Greedy Williams after missing all of 2020 with a nerve ailment in his right shoulder.

A smart and esteemed team leader in Indianapolis, Walker replaces B.J. Goodson as the run-stopper tackler in the middle of the defense. Whether he stays on the field in 4-2-5 alignments remains to be seen.

He joins the tackle rotation with Sheldon Richardson, Andrew Billings and Jordan Elliott, and relieves the pressure of using the No. 1 draft pick on a defensive tackle.

A potential developmental third tackle who spent four games on the practice squad before being poached by the Cowboys.

If all goes right, he’ll provide depth but wouldn’t finish second on the defense in tackles, as he did in 2020.

After giving a generous home-team discount, he continues as Baker Mayfield’s undeniable most trusted receiving target and can be on hand to finish the job he started as a fifth-round rookie in 2016.

He kicked through a late-season slump and finished with a flourish, making all 15 kicks (11 PAT, four field goals) in the final regular-season game and two post-season games.

In his first season in Stefanski’s offense, he emerged as the team’s best run-blocker among receivers and a surprisingly reliable pass catcher after making his mark on special teams. As a restricted free agent, he could sign an offer sheet from another team, but the Browns would have the right to match.

He never had the chance to prove himself as a returner last year before suffering a torn ACL in the third game. He deserves a second chance.