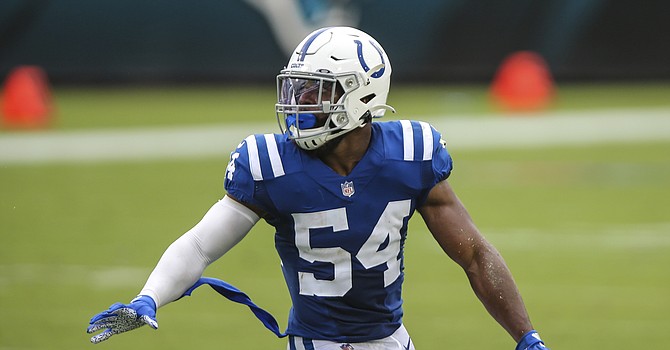 Linebacker Anthony Walker's defection to the Browns was lamented by former teammates with the Colts, a testament to his influence in their locker room. (USA Today)

Takeaways from the fifth day of NFL free agency …

On a very busy Friday, the Browns continued to chip away at team needs and also introduced two new players who made big first impressions on Zoom calls.

*Agreed to terms with former Colts linebacker Anthony Walker on a one-year deal reportedly worth up to $3.5 million.

Walker, 25, was not only the “quarterback” of the Colts defense but also a high-character influencer in the locker room whose departure was lamented by teammates on social media. “Well, I’m about to cry,” tweeted Colts Pro Bowl linebacker Darius Leonard upon hearing the news.

Walker started 46 of 48 games the past three seasons and averaged more than 100 tackles a year.

In his second stint with the Browns last year, Parkey took over for released kicker Austin Seibert in Week 2 and made 19 of 22 field goals and 43 of 47 extra points. He missed three PAT and one field goal in Games 13-15, and then was perfect in Game 16 and two postseason games, making 11 of 11 PAT and four of four field goals.

Natson had only three punt returns and one kickoff return before suffering a torn ACL in Game 3 last year.

Senat spent the first four weeks last season on the Browns practice squad and then was signed by the Dallas Cowboys.

Jackson, 31, last played with the Eagles after stints with the Broncos and Jaguars. He made the Pro Bowl in 2017 with the Jaguars and then suffered a Lisfranc foot injury with the Eagles in the 2019 season opener. Jackson recovered and appeared in 15 games in 2020 and had 2.5 sacks.

Defensive end Takk McKinley signed a one-year contract for up to $4.25 million on Friday and is the front-runner to replace departed Olivier Vernon in the starting spot opposite Myles Garrett.

McKinley revealed that not only did the Browns tried to claim him three times last year, they attempted to trade for him after he requested a trade from the Atlanta Falcons.

Browns GM Andrew Berry was the advocate for McKinley. Berry was vice president of player personnel when McKinley was selected No. 26 overall by the Falcons in the 2017 draft. McKinley said he made his first pre-draft visit to Cleveland that year.

“I knew Andrew Berry had the most confidence in me and believed I am a great D-end,” he said. “He liked that I am explosive, I am fast and I am a dawg.

“I felt like for Mr. Berry, he has seen enough on tape and was like, ‘OK, this guy, he has it. Now it is just get him in the right system and get him around the right people, and let’s get after it.’”

McKinley, 25, was purposely nattily attired in a suit and tie on his Zoom call with media. The theme of his message was that he has matured as a person after making mistakes that derailed his once-promising career.

“Life is a rollercoaster,” he said. “For me, the biggest thing is to learn from my mistakes. I am not perfect. I made a lot of mistakes in my past. However, if I want to grow from that, I just do not make the same mistake twice.

“I just think in my younger days – I am only 25 so I can’t really say ‘younger days’ like that – but in 2017 when I first got into this league, people would tell me things and I kind of just thought my way was the best way or whatnot or I would do certain interviews and be very immature about it.

"Once again, this league is not promised. It is a privilege to be here talking to you. I feel like I am at the point in my career where if I want to be in this league, I need to start acting like it. Today it was not to look good, but it was for myself and everybody else to know I mean nothing but business.”

Safety John Johnson III, who was the Browns’ No. 1 target in free agency and signed for $33.75 million over three years, was positively joyous in his introductory interview on Zoom.

He was the captain and signal-caller on the Rams’ No. 1-ranked defense last year, yet was enthusiastic about leaving an NFC playoff team for the Browns. He was sold on the passionate Cleveland football market by former Boston College teammate and St. Ignatius High School grad Kevin Kavalec.

“He had nothing but great things to say,” Johnson said. “Honestly, I knew that the fans loved their team and supported the team, but when I got here yesterday, people started to notice me already so that just confirmed everything. I have just been hearing things. It is all coming into fruition, and I am just happy I made the right decision.

“I felt like it was an opportunity of a lifetime, coming to a situation that things are moving in the right direction. That is rare in this business. It is really a business that it is rare that people care about you, people actually appreciate you and people want to do things the right way.

"This city as a whole, let alone the organization, it drips that [it cares, people appreciate you and it does things the right way]. It drips that. I just felt it had a young group, a young secondary, a great defense. We can get a rush on the quarterback. I am like, ‘It will be a perfect fit to get out here to Cleveland.’ It was a no-brainer.”

“We all are similar body types and similar skillsets,” Johnson said. “Just being out there together, hopefully, we can all be on the field at the same time giving quarterbacks headaches and just moving all around and just doing different things from a disguise standpoint. It is just something that I am looking forward to.”