Undermanned Browns Could Write Their Own Fairy Tale 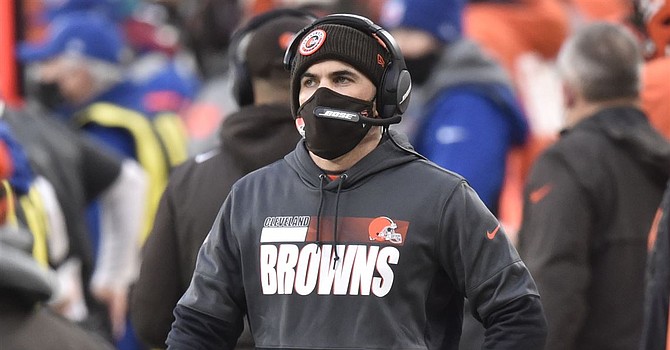 Coach-of-the-year frontrunner Kevin Stefanski will be watching his team from his basement compete in its first playoff game in 18 years. (Pittsburgh Post-Gazette)

This whole season under the cloud of Covid-19 has warped reality with surreality. What used to be real isn’t anymore. Who could have foreseen the Browns under a whole new football operations department and a first-time head coach turn the team around without the benefit of a normal offseason and training camp while operating under the confines of disruptive protocols? But they did it, hurdling obstacles and jelling as a team, as a result. And the hurdles at the end got even higher. The Browns finally found the coach to raise a franchise sunken lower than the Titanic. And now he is taken from them in their first playoff game in 18 years by Covid. Kevin Stefanski and four of his coaches are not available. Neither are four players, including Pro Bowl guard Joel Bitonio, the longest-tenured member of the team. Covid wiped out all but one day of practice the last two weeks. In an emotional essay on the Browns’ Website, Bitonio wrote, “The last few weeks have been crushing, and as a team we've had to show some resilience … It's one of those things where it's like, ‘How is this happening to us?’ That was one of the things Coach mentioned earlier in the year. He said it so many times about hitting a curveball. I don't know if he realized how many curveballs we'd get this year, but it's been quite a few and it's just about resilience and next man up.” Logic says the Browns have no chance against their nemesis in Heinz Field, where the Browns have won one game since it opened in 2001 and lost the last 17 in a row. It’s fairy-tale stuff to even imagine a pathway to victory for the Browns. Fittingly, legendary announcer Al Michaels is on hand to call the game on NBC’s "Sunday Night Football." Do you believe in miracles?

Second down: Play back.

Getting three players back from Covid-reserve on Saturday helps. But four won’t be available – Bitonio, cornerback Denzel Ward, cornerback Kevin Johnson and receiver KhaDarel Hodge. (A fifth key player – defensive end Olivier Vernon – ruptured an Achilles tendon in the win last week.) The absence of Ward and Johnson is huge. They were missed badly in Game 16 as Mason Rudolph kept the Steelers in it with more than 300 yards. Now here comes Ben Roethlisberger, who recaptured his game in the second half of Game 15 with 244 yards and three touchdowns. Coordinator Joe Woods has to work magic with a cornerback roster of Terrance Mitchell, Robert Jackson, M.J. Stewart, Tavierre Thomas and A.J. Green. Mitchell missed Friday’s practice for an undisclosed non-injury reason and is questionable for Sunday. So, it’s possible Woods’ top three cornerbacks all will be season-long backups. And they had one day of practice to figure it all out on Friday.

Third down: On guard.

If you can believe it, the situation at left guard is worse. With Bitonio down, and Chris Hubbard (knee) and Nick Harris (knee) both out, the starter at left guard represents the team’s fifth guard. No NFL team has five guards. So the project this week was to prep Michael Dunn, whose only extended playing experience was in two leagues no longer in operation (Alliance of American Football and XFL). Dunn has spent most of the season on practice squad giving the defense “looks” on scout team. The coaches may consider moving veteran Kendall Lamm there, but Lamm has more offensive touchdowns in his career (one) than games at guard. This is the one potential wrench thrown into an otherwise intact offensive machine. It can’t be overstated that one problem position could cause havoc against a Steelers defense that leads the NFL with 56 sacks and is second with 27 takeaways. Last week, Pittsburgh didn’t record a takeaway, but played vanilla without edge rusher T.J. Watt and defensive tackle Cameron Heyward. Whichever offensive tact Stefanski chooses to protect his defense – aggressive passing to run up early points, or methodical ball-control using Nick Chubb and Kareem Hunt – the left guard position would seem to be extremely important to the cause.

Fourth down: Chop him down.

The story seems so old now. The night Myles Garrett was drafted No. 1 overall by the Browns in 2017 he said he was coming after franchise-tormentor Ben Roethlisberger to “chop him down.” Completing his fourth season, Garrett is 0-2-1 in games against Roethlisberger. He’s had his moments, notably in the 2018 season-opening tie. But he hasn’t chopped him down. Big Ben has now run his record against the Browns to 24-2-1, counting one win off the bench. Garrett affected six Browns victories this year with game-changing plays – four strip-sacks, a pressure-causing interception and a safety when he was held in the end zone. The Browns are 7-0 in games in which they win the turnover battle. Garrett has to be either the turnover-maker or turnover-inducer. “It is a hell of a challenge,” Garrett said of winning in Pittsburgh. “This is what we have all been looking forward to and I know I have been looking forward to it myself. The Steelers and the Browns have had history against each other so now, it is just up to us to step up to the plate.”