Myles Garrett Gets His Money; Now He Must Get Big Ben 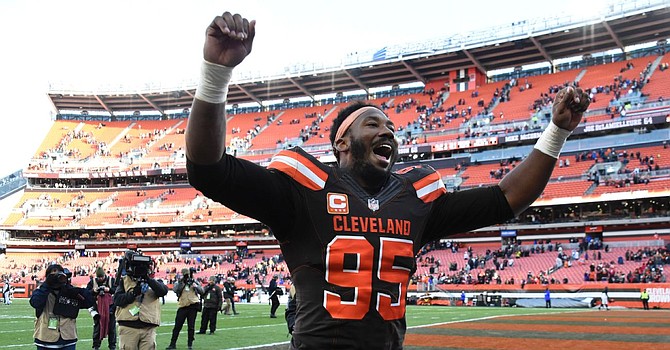 Of all the accomplices to the Browns’ terribly disappointing season in 2019, none has been given the benefit of the doubt, locally, more than Myles Garrett.

While the 6-10 record is routinely pinned on coach Freddie Kitchens, quarterback Baker Mayfield and, to a lesser extent, receiver Odell Beckham Jr., I can argue that Garrett alone had the single biggest impact on the Browns’ precipitous demise.

They were on the brink of turning it around. They would have defeated the Steelers a second time with Garrett on the field and that alone would have changed the course of history.

As Garrett was excoriated nationally for his loss of control, owner Dee Haslam spoke volumes when she honored Garrett the next week by donning his No. 95 on a winter ski cap. The Steelers were appalled by that, by the way.

And now the Browns are on the verge of making Garrett the highest-paid non-quarterback in the NFL with a five-year contract extension reportedly worth $125 million total and $50 million guaranteed upon signing.

It’s a reasonable business act for the Browns. They must be assured that Garrett will not revert into a meek wallflower as a result of the trauma of his uncharacteristic brain-lock. I believe that’s more of a possibility than Garrett repeating his mistake and earning another indefinite suspension.

The price tag for a pass rusher of Garrett’s incomparable physical talents and a ceiling far from being reached will only increase. For once, the Browns are being proactive in securing a foundation player for the future. Garrett is only the fourth Browns' No. 1 draft pick since 1999 to earn a second contract from them.

Both sides were intent on getting this deal done now. In a way, Garrett did the team a favor by not waiting for a monster year that would skyrocket his value.

Perhaps it was the uncertainty of the Covid-19-plagued 2020 campaign that motivated Garrett to grab the $50 million guarantee. If so, consider it just a down payment for the team’s loyalty toward Garrett. Now it’s on him to make up for the selfish act that upended the 2019 season.

It’s all about the Steelers

Certainly, Garrett is a player and a man you would want representing your team and city.

Since he arrived as the No. 1 overall pick of the 2017 draft, Garrett has been, as GM Andrew Berry stated in a radio interview this spring, a “pillar of the organization … great player, great person.”

Garrett is a gentle giant who writes poetry as deftly as he bashes quarterbacks. He is team captain of the Chris Long Foundation’s Waterboys program, which delivers clean water to remote, impoverished communities in East Africa. When Garrett was punched in the face by an overzealous, fake autograph-seeker at a traffic-light stop in downtown Cleveland, he famously turned the other cheek and reported the incident to proper authorities.

The blip on Garrett’s three-year career in Cleveland, of course, was his loss of control in the final five seconds of the Browns’ 21-7 muted win over Pittsburgh on Nov. 14.

It was Garrett’s finest game marred by his worst moment.

Hearing what he said was a racial slur out of the mouth of Steelers fill-in quarterback Mason Rudolph, Garrett ripped the helmet off Rudolph and clubbed his head with it. Garrett paid a stiff price -- $1.211 million in fines and game checks forfeited in a six-game NFL suspension.

The irony is that we had been waiting for Garrett to take over a game against the Steelers. And when he finally did, he over-did it.

Remember what he said the night he was drafted? That he was coming for Browns-killer Ben Roethlisberger “to chop him down.”

Three years later, Garrett has yet to defeat Roethlisberger in a game.

The closest he came was in the 2018 season-opener. Garrett had two sacks and two forced fumbles and influenced two of Roethlisberger’s three interceptions. Alas, they weren’t enough as the Steelers escaped with a 21-21 tie.

In three seasons, Garrett missed one game against Roethlisberger because of an ankle injury and last year Roethlisberger missed both with his elbow injury.

By now, Garrett – and Mayfield, for that matter – should realize that every Browns season is defined by the two games against the Steelers.

Chronologically, Garrett is the first of the two overall No. 1 draft picks to be eligible for a new contract. Now that he is on the verge of getting his “mega-deal,” Garrett has to deliver his payback.

It’s time for Garrett to beat Roethlisberger, the Browns' franchise-destroyer, and make up for the games he lost last year.