Browns Penalties Are Down, In Line With A League-Wide Trend 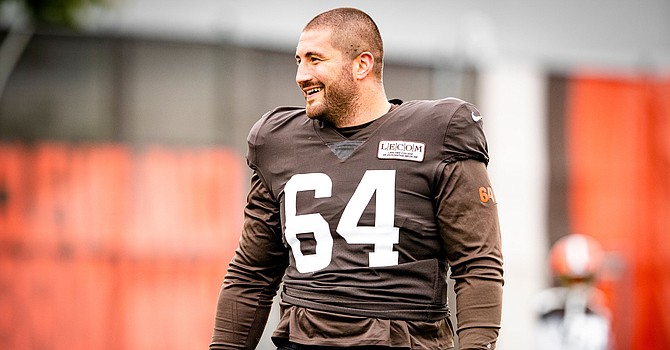 Center JC Tretter is not complaining about a reduction in offensive holding calls throughout the NFL. (Cleveland Browns)

Browns penalties are down from a year ago, but it’s hard to tell yet if it’s because of better coaching or a trend in the league to throw fewer flags.

The Browns are tied for fifth-most with 22 penalties. Yes, that’s a big improvement over the 35 the Browns had through three games last year. But that number was inflated because of a near-record 18 penalties in Game 1.

Over the course of the 2019 season, the Browns lowered their penalty rate and committed 122, which ranked eighth. The 2020 Browns are on pace for 117.

One obvious trend this year is that officials are throwing fewer flags for offensive holding.

Kevin Seifert of ESPN.com reported that holding calls are down by 59 percent and it might be the result of an NFL directive to call only “clear and obvious” infractions. The result has been a record combined points per game through three weeks and slightly shorter games.

Speaking for everyone, Browns center JC Tretter said, “I am not going to complain too much about that.”

The Browns are averaging one offensive holding call per game. Tretter has one, guard Wyatt Teller one and tackle Jedrick Wills one.

“I saw that report also,” coach Kevin Stefanski said. “Nothing glaring has jumped out at me on the tape, but the numbers are what they are so it does look like they are down.”

Tretter made a case that the truncated training camp actually helped the offensive line.

“I think it shows that we were able to prepare even with the limited offseason and play with good fundamentals,” he said. “I think that acclimation period was really good for players as it let you, instead of being thrown right into 11-on-11 and thrown right into team drills and competitive drills, it gives you a bunch of time to work with your coaches on fundamentals, especially the offensive line of getting your footwork down and getting your hand placement down.

“I think that was a big advantage of getting guys their technique down early on in training camp, and I think that is translating to the game, as well.”

For really the third year in a row, playing time of receiver Rashard Higgins continues to be a mystery.

Higgins, who signed a one-year contract with the Browns this year after testing the free agent market, opened the season behind KhaDarel Hodge in the battle for No. 3 receiver behind Jarvis Landry and Odell Beckham Jr.

And then Higgins was a healthy scratch for Game 3 against Washington.

One big reason may be Hodge’s blocking in the running game. When the Browns line up three receivers and run the ball, they usually run to the side on which Hodge is lined up. Hodge is 6-2 and 205 pounds and made the team a year ago on his special teams play.

“Hodge is one of the better blockers I have been around,” said running back Nick Chubb. “I see it in practice and in the game. He is always downfield blocking. It shows a lot. It might seem small, but if he does not block that guy, that is one that we have to make miss or makes the tackle. He has been doing great blocking down the field.”

The Higgins mystery may come down to this: The Browns don’t have a huge need for a third receiver to catch the ball right now. Higgins might be the better receiver, but Hodge clearly is the better blocker.

In the morning, the Browns promoted running back/returner Dontrell Hilliard from the practice squad. The reason became clearer later in the day when running back Kareem Hunt missed practice with a groin injury …

Also missing practice were cornerback Denzel Ward (groin), left guard Joel Bitonio (back), defensive end Adrian Clayborn (hip) and line backer Tae Davis (elbow). Ward’s practice status is particularly newsworthy this week in preparation for the Cowboys’ No. 1-ranked pass offense. Ward had to leave the Washington game after injuring the groin in Thursday’s practice. “I think it is just something that we have to be mindful about and are going to give him a day here and then reconvene tomorrow and see what we can do with him,” Stefanski said …

Cornerback Greedy Williams (shoulder) and defensive end Olivier Vernon (abdomen) were limited at practice. Williams has not been active for a game yet. If he’s able to go this week, expect him to be eased in and not take on a full starting load immediately.