#Heytony: What’S The Concern Level With The Browns’ Offensive Line? 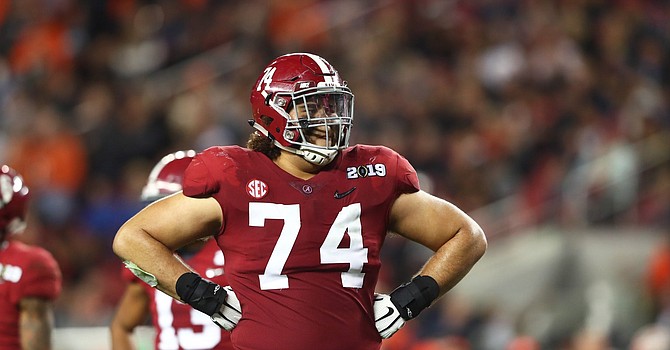 Jedrick Wills' conversion to left tackle is not the No. 1 obstacle of the Browns' offensive line. (si.com)

Hey Tony: What is your level of concern for the O-line & specifically the left tackle position? Can they get it done with the players they have?

Hey Jeff: On paper, the Browns have done a tremendous job of upgrading both tackle positions with a first-round draft pick (Jedrick Wills) and a blue-chip free agent (Jack Conklin). The addition of line coach Bill Callahan was just as important – if not more so. Wills’ conversion from right tackle to left tackle was green-lighted by Callahan and Alabama coach Nick Saban – which is good enough for me. My only concern is the lack of practice time on the field because of restrictions caused by the Covid-19 pandemic. More than any position group, the offensive line needs to work on the field together to foster cohesion. I think this is an obstacle that will take time to overcome – more so than anyone is willing to admit.

Hey Tony: How does Myles Garrett and Jadeveon Clowney having the same agent affect either getting a deal? Is one at all a carrot for the other?

Hey Matt: It’s not uncommon for an agent to represent multiple players on the same team, even multiple players at the same position. Prominent agents like Bus Cook don’t leverage one client against the other. Garrett and Clowney may play the same position, but they have vastly different contract situations at this point in their careers. Garrett is under contract for two more years and the Browns are exploring parameters for a long-term second contract. Clowney is a free agent in the position of likely needing a one-year deal to re-establish his market for a longer-term deal in the future. Relationships between agents and GMs/teams are helpful in getting deals done. The fact the Browns have dealt with Cook on Garrett’s first contract establishes trust, which is a good starting point for talks about Clowney, but it guarantees nothing.

Hey Tony: I like the sound of sets with both Nick Chubb and Kareem Hunt. Who has the most carries at the end of the season?

Hey Josh: Barring injuries, I estimate Chubb will have 65 percent of the carries and Hunt will be in the top five in receptions on the team.

Hey Tony: What does Kevin Stefanski’s wide zone offense entail? What does that phrase mean?

Hey Gavin: I’m no expert, but here are some things I’ve learned: An absolute oversimplification would be to imagine the five-man offensive line as a picket fence moving laterally and in total unison. The running back makes one cut through the natural gaps created and then makes his way through the second layer of defense. Here is more detail from a story I did with Joe Thomas in February. The system favors agility over power. It is non-complicated and thus easier for linemen to master and execute. Repetition makes it effective. Since the blocking scheme doesn’t change much from play to play, there is no tip-off to run or pass. It is highly effective in creating open receivers off play-action passing. The system was popularized in the 1990s in Denver when Mike Shanahan was head coach. Denver consistently produced 1,000-yard seasons from backs taken late in the draft. Shanahan’s son, Kyle, learned it from Gary Kubiak, Mike’s old backup quarterback. In 2014, Kyle was Browns offensive coordinator when three backs totaled 1,600 yards and Brian Hoyer had the team at 7-4 – before the bottom fell out. Stefanski learned it from Kubiak last year in Minnesota. It is the perfect system for a quarterback like Baker Mayfield, who is effective throwing off play-action and on the move out of the pocket.

Hey Tony: Will there be any more moves on the Browns’ part going into training camp in July?

Hey John: If Clowney doesn’t agree to the Browns’ reported one-year offer, I doubt there will be another significant addition to the roster.

Hey Tony: Should the Browns explore a trade for Jamal Adams even though he didn’t list Browns as a choice?

Hey Chad: Adams wants a contract that probably would make him the highest-paid safety in the NFL. The Browns have big contract decisions coming on home-grown players Garrett, Baker Mayfield, Chubb and Denzel Ward. Adding a newcomer to the mix wouldn’t be wise. Besides, the Browns hope second-round pick Grant Delpit can be their Jamal Adams.