#Heytony: Shouldn’T The Browns Select ‘Best Player Available’ At No. 26? 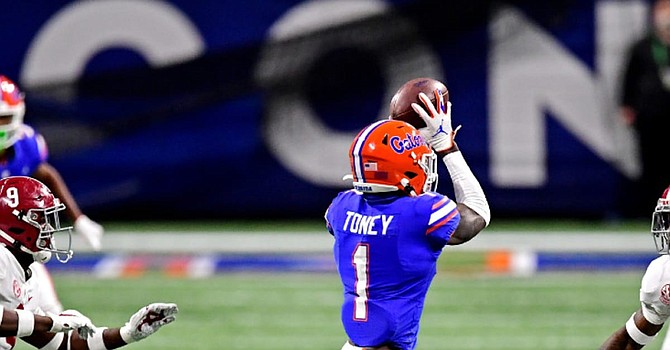 Should the Browns select an offensive player, such as Florida receiver Kadarius Toney, if he is the best player available at No. 26? (SportsIllustated.com)

Hey Tony: The talk has been about pass rusher and cornerback. Thinking about building depth for the long term and how they couldn’t pass on [Harrison] Bryant last year, could AB surprise and really just truly go best player available in round 1?

Hey Matt: I believe the phrase “best player available” is outdated. This isn’t baseball, which waits for years for draft picks to develop. There are no more five-year plans. The NFL stands for Not For Long, meaning if you don’t win now you won’t have a job for long. Nowadays, you use free agency to fill team needs. You draft, mostly, to top off needs. If the Jets adopted “best player available” strategy, they wouldn’t take Zach Wilson No. 2. It would be Penei Sewell or Kyle Pitts or Ja’Marr Chase. Clearly, those three prospects are better players than the BYU quarterback. Should the Browns take an offensive tackle at No. 26 just because his grade is a shade better than, say, a defensive player? Absolutely not. I think there comes a point when a team recognizes it has a window of opportunity to win a championship and that building for the “long term” doesn’t apply. Now, that doesn’t mean mortgage the future for the present. Just take the best player available for your team. In the Browns’ case, it would appear a pass rusher or cornerback – even a linebacker -- would help the team more in 2021 than a higher-rated player at another position.

Hey Tony: We’ve not heard of any contract restructuring with the Browns. Since they’re getting tight to the salary cap, do you expect any restructures or think they’ll ride it out as is this season?

Hey Norm: GM Andrew Berry appears reluctant to do any contract restructuring this year. Why? A basic restructuring creates salary cap room in the given year at the expense of adding cap charges in ensuing years. Berry was careful not to overspend this year because he needs future cap space to accommodate likely contract extensions for Baker Mayfield, Nick Chubb, Denzel Ward and Wyatt Teller.

Hey Tony: What are the chances Kareem Hunt and Nick Chubb both sign long-term deals to stay with the Browns?

Hey Ryan: Last year the Browns agreed to a two-year extension for Hunt for $13.25 million that tied the running back to the team through 2022. Chubb’s rookie four-year deal expires after this season. I assume the Browns will try to lock up Chubb to a similar short-term deal – maybe three years max, which would run through 2024 – because the shelf-life of running backs is shorter than other positions.

Hey Tony: Do you think the Browns will pursue someone like Justin Houston or [Jadeveon] Clowney or just be content to draft a defensive lineman at #26?

Hey Dustin: I sense the Browns are in a holding pattern on free agent contracts until after the draft. Now, they reportedly have a one-year offer on the table for Clowney, whose only free agent visit was with the Browns. They don’t appear to have as strong an interest in Houston at present. All of that could change following the draft.

Hey Phil: Oh, wow. Metcalf was a spectacular return specialist, able to stop, cut, and accelerate at full speed in three strides, and then break away. Cribbs was more powerful, a tackle-breaker with breakaway speed who also was his team’s leading tackler on coverage. As a pure returner, I’d give the slight edge to Metcalf. As an overall special teams force, Cribbs was unique.

Hey Tony: With a defense that can potentially give Baker Mayfield great ball position consistently, and a second year under [Kevin Stefanski], do you think there's a chance Mayfield ends up in the MVP convo by the end of the season?

Hey Adrien: The way Mayfield ends up in the MVP convo is by leading the Browns to the best record in the AFC (or close to it).

Hey Tony: It's February 2023 and you just finished 18 holes outside of Glendale covering the Browns’ first appearance & win at SB57. What’s the top story, and do you retire on top?

Hey Steve: Retire? What about a repeat? Seriously, my personal plans are not dictated by the fortunes of the Browns.