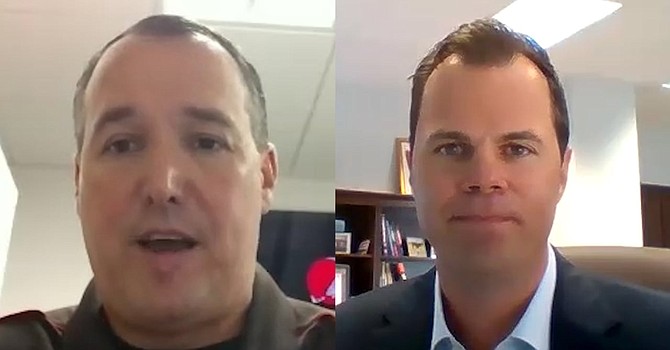 Browns senior VP of player health and development Joe Sheehan (left) and team physician Dr. James Voos believe the team facility is as safe as could be for players. (Cleveland Browns)

An outbreak of 18 positive tests has flattened baseball’s Miami Marlins.

And the number of NFL players choosing to opt out of playing in 2020 has reached 30, and counting, including two members of the Browns.

But the men in charge of the Browns’ infectious disease team say they are “cautiously optimistic” the league can pull off training camp and a full season during the unrelenting Covid-19 pandemic.

“There are no guarantees in how this virus is going to behave,” Browns team physician and University Hospitals Dr. James Voos said on a Zoom call with reporters on Wednesday.

“What we do want to do is assure that we have set up the safest environment possible for the players, both in the physical environment, with the education of the players and with testing.

“Certainly this is a very fluid process that we will have to monitor on a regular basis, but our goal is to have a safe, healthy season for the players. We will take this week by week, day by day to assure we are providing the best environment possible.”

Safety is a collaborative effort

On Wednesday, Browns veteran players completed the second of three tests for Covid-19. They are only admitted to the facility after a third negative in four days. And then they will be tested every day for the first two weeks of camp.

Meanwhile, two Browns joined the growing list of NFL players choosing not to play in 2020. They are guard Drew Forbes, former GM John Dorsey’s sixth-round pick in 2019 and a one-time contender to start at right guard, and offensive tackle Drake Dorbeck, an undrafted free agent from Southern Mississippi.

They were placed on the league’s newly created reserve/opt-out list. The players’ decisions are irrevocable, per the agreement between the NFL and the players union regarding Covid-19 protocols.

Some of the protocols are still being finalized, and they point to a burden of responsibility being shifted to the players.

The apparently-isolated outbreak of positive tests on the Marlins has made everyone aware that the best-laid plans can go awry if protocols are breached.

“What is happening with the Marlins is really a great example of the challenge we have lying ahead of us,” said Joe Sheehan, Browns senior vice president of player health and development. “I think everybody really understands that. It is going to be up to all of us to really work together to implement the protocols that we have instituted and put in place to give us the best chance to be successful this fall.”

Players will find a new world order when they finally gain admittance to their much-modified headquarters facility.

Capacity in the locker room has been reduced from 90 lockers to 40 to accommodate six feet of social distancing. Lockers are separated by wall-to-ceiling Plexiglas. Another 40 lockers were installed in the 9,000-square-foot weight room, and the weight room was moved to the field house.

Voos said the Browns invested “heavily” in wearable technology to monitor symptoms, vital signs, and contact tracing. If a player tests positive – and nobody doubts there will be positive tests – the team will be able to trace who that player came into contact with in the facility.

But players will remove the contract tracing devices when they leave the building. And because players have the option of staying at their home residences rather than the team hotel, their conduct in maintaining protocols outside the facility will be of paramount importance.

“There is no doubt that this is going to be a challenge, right?” Sheehan said. “We are ultimately all in this together, and everyone really has to understand that every decision they make both inside the building and outside the building should be done in an attempt to mitigate the risk of the spread of the virus. We all kind of share that collective responsibility to our success, and we are all kind of looking forward to really working together to ensure we do that.”

To that end, the NFL and players union are finalizing agreements to prohibit “high-risk” activities outside team facilities. Violating the protocols can result in team discipline for conduct detrimental if they contract coronavirus through reckless activity.

According to an ESPN report, the NFL seeks to define “high-risk” conduct as:

*Attending an indoor nightclub with more than 15 people.

*Attending an indoor bar with more than 15 people other than to pick up food.

*Attending an indoor house party with more than 15 people.

*Attending an indoor concert or entertainment event with more than 15 people.

*Attending a professional sporting event, other than an NFL game or event, with more than 15 people.

*Attending a religious service attended by more than 25 percent of the venue’s capacity.

Sheehan and Voos believe the team’s facility has been made as safe as possible. Now it’s up to the players to follow that lead.

“I would encourage everybody again that it is a collaborative effort,” Sheehan said. “To the extent we all do our part to wear a mask, stay six feet apart, maintain social distancing, wash your hands frequently and often, it will really go a long way to helping us control this pandemic.”