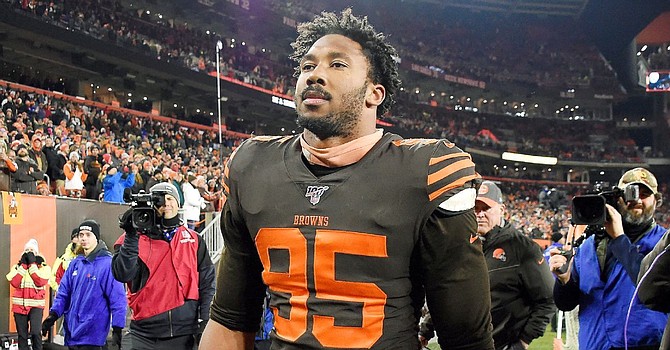 Myles Garrett's time for a contract extension should come soon, but not right now. (espn.com)

1.What’s the hurry?: Let’s hope that hyperventilated reports of a pending “mega-deal” between the Browns and Myles Garrett are premature.

As good as Garrett has been in three seasons with the Browns (30.5 sacks in 37 games), there should be no haste in signing him to what assuredly will be the most lucrative contract for a defensive player in the NFL. That distinction currently is held by Chicago Bears pass rusher Khalil Mack.

After the Raiders traded Mack to the Bears in 2018, Chicago signed him to a six-year extension for a reported $141 million, with $60 million guaranteed. Mack’s deal was team-friendly for the first two years. But now, in its third year, is when the piper starts being paid. Starting in 2020, Mack’s salary cap figure averages out to $25.8 million over the next five years.

Can Garrett be the kind of defensive force and team cornerstone worthy of similar salary numbers? Yes. So why not sign him up right now?

1.Garrett is under contract for two more years. The Browns could easily franchise him after that for a third year of control.

2.The possibility of playing some or all games without fans in 2020 could have a chilling effect on the 2021 league salary cap. Reduced revenues mean the 2021 cap could be flat at best or go down at worst. Committing to a “mega-deal” under these uncertain league economic conditions seems unwise.

3.Garrett’s 2019 season ended with a six-game suspension after he pried off the helmet of Pittsburgh quarterback Mason Rudolph and clubbed him in the head with it. Garrett said that Rudolph used a racial slur during the heat of the moment. Rudolph and Steelers coach Mike Tomlin have vehemently denied Garrett’s accusation and the NFL found no evidence of it.

Wherever the truth lies, Garrett’s mistake – with five seconds left in a rare Browns win over the Steelers -- was the single greatest reason the Browns’ season imploded into 6-10 and another organization blow-up. If Garrett were not suspended for the final six games, I think the Browns win two more games, at least, and, well, whatever …

It would be wise for the Browns to see how the trauma of that event affects Garrett’s style of play in 2020.

Will it motivate him to even greater heights? Or will it cause him to be less aggressive for fear of incurring another suspension? It’s possible Garrett could be targeted by officials by virtue of his loss of composure – fairly or unfairly.

Personally, I think Garrett will mature into a DPOY candidate.

If that becomes plain during the 2020 season, contract talks should intensify and a new contract could be completed before the year is out.

But signing him now, before he takes the field for the first time since his suspension, would be a needlessly hasty decision on the part of the Browns.

Yes, the price for a franchise pass rusher like Garrett goes up with each passing year. Timing is everything with these blockbuster “mega-deals.” The time for it seems right after six to eight games in the coming season. Not now.

2.Send in the Clowney: National reports keep singling out the Browns as the most aggressive team in pursuing Seattle free agent defensive end Jadeveon Clowney.

One report said Clowney turned down a Browns’ multi-year offer for an average of $17 million a year.

Another one said the Browns offered a one-year deal for $15 million.

Neither report attributes the figures to the Browns or Clowney’s agent Bus Cook. So who knows?

Both reports conceivably could be accurate. If so, the one-year deal for $15 million makes much more sense for the Browns.

Clowney had three sacks last year for the Seahawks and has a long injury history that includes four procedures on his knees, including microfracture surgery in 2014.

Clowney would be an intriguing complement to Garrett at left end. But committing long-term to him seems reckless, especially considering there are upcoming long-term decisions to be made on home-grown talents Garrett, Baker Mayfield, Denzel Ward and Nick Chubb.