Kevin Stefanski Says He’Ll Meet With Odell Beckham Jr. On Thursday And ‘Lay Out My Expectations’ 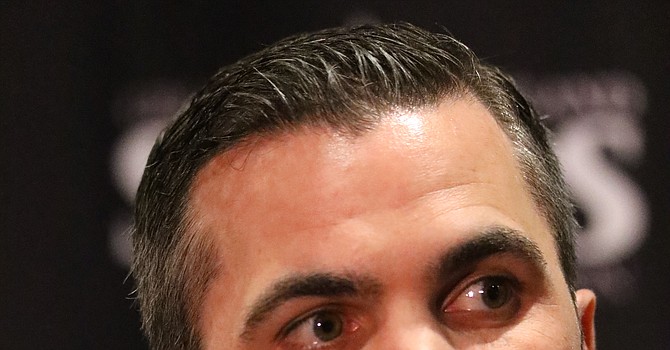 To be a fly on the wall: So, what was OBJ thinking when he passed out $100 bills to LSU players upon winning the college football championship?

When he screamed into that megaphone in front of the LSU band?

When he tried posting up Karl Malone on the sideline during the game?

And, most importantly, when he slapped that Superdome security officer on the butt in the locker room?

Those questions may come up when new Browns coach Kevin Stefanski meets for the first time with the mercurial wide receiver Thursday in Browns headquarters – just two days after Beckham underwent successful core muscle surgery to repair what is commonly called a sports hernia.

Beckham isn’t going to be prosecuted for slapping the security guy’s butt. A warrant for misdemeanor simple battery was rescinded by New Orleans police when common sense prevailed and the charge was dropped.

But video of Beckham’s erratic behavior at the championship game last week as a guest of Louisiana State underlies the first issue confronting Stefanski as Browns head coach.

“I look forward to sitting down with Odell face to face,” Stefanski said backstage at the Greater Cleveland Sports Awards in the Renaissance Cleveland Hotel. “I haven’t had a chance to do that yet. I’ll get a chance to do that [Thursday]. And at that point, that’s when I can start laying out my expectations for Odell and for all of our players.”

Asked his feelings about Beckham handing $100 bills to LSU players, Stefanski said, "Again, we’ll talk about that and lay out the expectations for our guys and how we want them to conduct themselves."

As Freddie Kitchens learned early on, Beckham poses quite a challenge for an inexperienced head coach.

Kitchens soft-gloved Beckham, saying he wanted “Odell to be Odell.” Beckham responded by attending the first session of OTAs, and then missing all of the rest. Towards the end of the season, Beckham downplayed the affect missing OTAs had on his disjointed year with quarterback Baker Mayfield.

Paton’s place?: Stefanski was strangely ambiguous when asked about the second interview given GM-candidate George Paton in Browns headquarters on Wednesday.

Stefanski and Paton were colleagues with the Minnesota Vikings for 13 years.

Because Paton was the only candidate so far to meet with the Browns a second time, he was considered the new front-runner to succeed John Dorsey as GM. But Paton returned to Minnesota late in the day without an agreement to join the Browns.

“We’re working through that process and we’re going to make sure we take our time and are methodical about it,” Stefanski said of the GM search.

Paul DePodesta, chief strategy officer and leader of the GM search, said he anticipated between three and five candidates for the job. So far, the only known candidates interviewed have been Andrew Berry of the Philadelphia Eagles, Monti Ossenfort of the New England Patriots, and Paton.

Asked if there were more candidates, Stefanski said, “I think that remains to be seen.

“I don’t think we have a timeline. We’re huddling up and having a lot of good discussions, and we’ll see where it goes.”

Stefanski said he didn’t know when the search would be wrapped up.

“Really not my call,” he said. “I’m a part of this thing and providing as much as I can.

“I think we’ve brought in some real good candidates. I don’t want to single anybody out. I just know Dee and Jimmy [Haslam] have done their due diligence to make sure we bring in some really qualified people and get them in our building and talk to them and understand that shared vision that we all have. I think it’s been a good process.”

Stefanski said that he envisions Callahan as a mentor.

“I’m excited to add him to the mix,” Stefanski said. “He’s a great teacher, first and foremost, which is so important. He and I have a lot of mutual friends, so I understand the man, he understands me, what we’re looking for, looking to do. Ultimately, having someone of his stature, a former head coach, is very important to me as we put our staff together.

“That’s the idea behind bringing coach Callahan here. He’s been there, done that, at the collegiate level, at the pro level. So I’m going to lean heavily on him, among other guys on the staff. But coach Callahan brings a very unique perspective and I just like to be surrounded by smart people.”

Stefanski would not confirm reports that he plans on hiring San Francisco defensive backs coach Joe Woods as his defensive coordinator.

"I saw his name out there [reported],” Stefanski said. “Another one of those great coaches I’ve been around, among many guys. But he’s in the Super Bowl, which is the ultimate we’re all trying to get to, so I’ll wait to talk about any of those scenarios until l after the Super Bowl.”