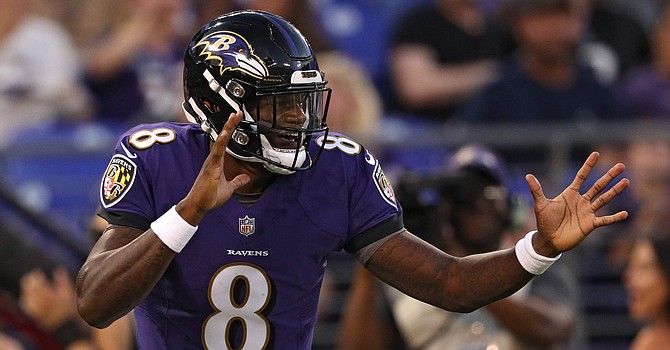 Lamar Jackson might be having the best quarterback season in NFL history. (Heavy.com)

1.Since losing to the Browns in Game 4, they’re 10-0. They’ve made a few changes on defense, but nobody disputes the largest reason for their run – by far – is the remarkable play of Lamar Jackson. The fifth quarterback taken in the 2018 Baker Mayfield draft, No. 32 overall, Jackson has literally run away with the 2019 MVP award. It’s a foregone conclusion. It’s not hyperbole to say he is having one of the greatest quarterback seasons of all time. He’s the only quarterback in history with more than 2,500 passing and 1,000 rushing yards. His 40 touchdowns produced (33 passing, seven running) are most in the NFL. Deshaun Watson is second with 33. Mayfield has 20. Dramatic improvement in throwing accuracy (66.2 percent completions) combined with his running ability (an all-time QB high 1,103 rushing yards, 6.9 average, seven TDs) and his size (6-2 and 212 pounds) make Jackson a unique threat. Teammate and backup QB Robert Griffin, the 2012 offensive rookie-of-the-year, has almost identical physical dimensions, but Jackson is sturdier, harder to bring down and, so far, much more durable.

2.Cast offensive coordinator Greg Roman as Dr. Frankenstein in the Jackson movie. The former John Carroll University defensive lineman expertly tailored his offense to Jackson and made it and him an even better version of the San Francisco 49ers Super Bowl team with Colin Kaepernick. With the threat of Jackson running, defenses lose the one-man advantage they have over run-first teams with conventional quarterbacks. Roman’s plethora of misdirection runs and Jackson’s great ability to execute fakes prevent teams from overloading any side of the field. It becomes a one-on-one matchup most times and Jackson loses very few of those.

3.A key factor in the Browns’ 40-25 win in Game 4 was a late scratch of run-stopping tackle Brandon Williams. Nick Chubb proceeded to gash the Ravens for 165 yards and three touchdowns. On an 88-yard TD run by Chubb, veteran safety Earl Thomas appeared to submit and pulled up. After the game, Thomas reportedly confronted Williams about not playing. Williams has proceeded to have one of his best years, as a result. As for Thomas, he explained the reason for pulling up was a hamstring tweak. Apparently, it shamed him into one of his best years, too.

4.The shellacking by the Browns was the second game in a row the Ravens’ proud defense gave up more than 500 yards. It resulted in personnel changes that turned that unit around. Inside linebackers Josh Bynes and L.J. Fort were signed off the street and have been regular starters and improvements against the run. Third-year safety Chuck Clark replaced injured Tony Jefferson and has been used as a hybrid nickel back/linebacker. And cornerback Marcus Peters was acquired from the Rams for a fifth-round draft pick and has been a playmaker in the secondary with three interceptions (two for touchdowns) and a deflection in the end zone to seal a win against Buffalo. Peters also had a Pick Six with the Rams before the trade. Since the loss to the Browns, the Baltimore defense has been in the top five overall.

1.The Ravens clinch the No. 1 AFC playoff seed with a win for the first time in their 24-year history. They were seeded No. 4 in their Super Bowl championship seasons of 2000 and 2012. If they wrap it up against the Browns, they are expected to rest most starters in their season finale against the Steelers.

2.The first season post-retirement of long-time special teams coordinator Jerry Rosburg has been a little rocky for replacement Chris Horton. Kicker Justin Tucker has a career-high two PAT misses, punter Sam Koch suffered a blocked kick and Ravens’ coverage units have languished in the bottom half of the rankings.

3.Offensive coordinator Greg Roman’s tremendous work with Lamar Jackson is expected to earn him head coach interviews after the Ravens post-season. Speculation made him an immediate potential candidate in Carolina after coach Ron Rivera was let go.

Small world: Coach John Harbaugh is a native of Toledo and attended Miami (Ohio) … Offensive coordinator Greg Roman played defensive line at John Carroll University … Tackle Orlando Brown is the son of the 1990s tackle for the Browns of the same name … Receiver Willie Snead played for the Browns in 2014 … Inside linebacker L.J. Fort was an undrafted free agent with the Browns in 2012 … Quarterback Robert Griffin III is one of 30 quarterbacks to start a game for the Browns since 1999. He was No. 25 and was 1-4 for the Browns in 2016 … Director of player personnel George Kokinis was Browns general manager and relieved of his duties after eight games in 2009 … Senior player personnel executive Vince Newsome played two seasons for the Browns (1991-92) and then was a special assignment scout for the team 1993-95 … Executive vice president Ozzie Newsome is the Browns all-time leading receiver, was an assistant coach and then personnel assistant under Bill Belichick in 1991-95, and was inducted as a Pro Football Hall of Fame tight end in 1999.