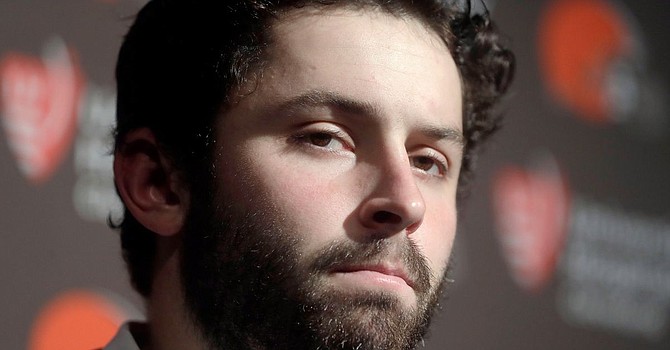 Some wise person in the newspaper business once said to me, “There are no dumb questions. Only dumb answers.”

Actually, I had heard the same thing earlier in life from a schoolteacher seeking to inspire inquisitiveness in her classroom.

Turns out there is a long history to this adage, of course. But hearing it from people I respected kind of guided me through this business.

These responses have been going on long before the grapefruit started clogging the quarterback’s esophagus – thank you, Sam Rutigliano, for that lasting expression -- during his tough second season.

On Wednesday, I tried to get to the heart of the Browns’ failure to capitalize on a potential game-changing blocked field goal by Denzel Ward late in the first half of the Patriots game.

With 2:19 to go, Mayfield and the offense had a chance to score last in the first half and then receive the second-half kickoff and score again. It would change the complexion of a game they had gifted a 17-0 spot to the Patriots.

Alas, the two-minute drive – the hallmark of winning, franchise quarterbacks – expired at the Browns’ 30-yard line, some 40 yards from a reasonable field-goal attempt.

They were lackadaisical in time management and went out in whimper with a sack and false start, exposing the flaws of a losing team, not a contending one. To me, this was the turning point of the game.

I sought Mayfield’s mindset about this failure, and he didn’t like it when I wouldn’t accept his usual tart responses to me.

It descended from there and he stomped off the podium in a scene that regrettably went viral.

The backstory: It’s a fact that I was outspoken against the drafting of Mayfield. Some of the stuff I wrote – and said -- before the 2018 draft … was not pretty. Can’t take it back.

But I tried hard to be open-minded when he arrived. And it didn’t take me long to realize I was wrong about some assumptions.

There was a time I approached Mayfield at his locker early in his rookie year and complimented him for the way he was working and handling the difficult time sitting behind Tyrod Taylor. This was before his coming-out party in the Jets game in relief of Taylor.

He was sitting at his locker working his phone, never looked up and said, “Yeah, ‘preciate it.”

So the understanding was we would do our respective jobs without much personal interaction. Fine. Bernie Kosar’s rookie season was a lot like that. No problem.

As he picked up the pieces of the broken 2018 season, I became convinced Mayfield was the right quarterback to lead the turnaround of the franchise – just like he said at the NFL Combine. Our only interaction was in group interview sessions, and he was always respectful. Sometimes he added some playful banter, which became uncomfortable.

At the appropriate times, I inquired to the PR department about one-on-one time with Mayfield. Nothing came of them. I was never sure if he actually received these requests or if there was an understanding that he would never do them.

Fast forward to this year’s preseason. The joint practice sessions in Indiana. I had a story idea about Mayfield’s jersey No. 6 and wanted to ask him about it away from the media group. I waited for the session to end, approached him and asked if he could take a couple questions privately.

I reported this exchange to a few club officials – one very high up the food chain – and nothing came of it.

One of the responses was, “That’s Baker.”

The bad news: I hate having a confrontation with the Browns quarterback at a time their season swings on a vine. I understand the frustration of what’s transpired, the pressure of lofty expectations, the difficulty of the task ahead.

I understand he operates best as an angry man. He has said as much.

I really enjoy chronicling his quest to turn this thing around.

But I am not the only person he has disrespected along the way. The stare-down of Hue Jackson last year, the putdown of Daniel Jones in a national magazine interview, the interference in Duke Johnson’s personal squabble with management … those are just the obvious occurrences that received widespread attention. There have been others that were brushed aside as “Baker being Baker.”

What’s disconcerting is that nobody in the organization has sat him down and lectured him on the error of his ways.

On the field, too, he has been given a pass by the coach and general manager that defies their responsibility to hold everyone accountable for the under-achieving performance of this team.

Mayfield has the toughest job on the team, no doubt. For that reason, he has to be the most mentally tough for the team to succeed. For the first time, I question if he has it in him.