Will He Stay Or Will He Go? Browns’ Decision On Freddie Kitchens Is Near 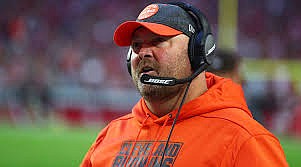 The fate of Freddie Kitchens' coaching tenure should be known by Monday. (si.com)

First down: Time for a decision.

In my 30+ years reporting on and analyzing about the Browns, they have made a coaching change following a loss to the Bengals two times – and both were in the middle of a season, not at the end. In 1984, Art Modell fired Sam Rutigliano after a 12-9 loss in Cincinnati in Game 8, which dropped the Browns’ record to 1-7. In 2004, Randy Lerner relieved Butch Davis of his duties after the coach reportedly suffered a panic attack during a 58-48 loss in Cincinnati in Game 11, which lowered the record to 3-8. Although Freddie Kitchens’ future as head coach has been the subject of speculation since a 24-19 loss in Denver in Game 8, the Browns have not tipped their hands on a decision. There was a trial balloon floated to Ian Rapoport of NFL Media two weeks ago. On Dec. 15, Rapoport reported that management stood behind Kitchens and intended to bring him back for a second season “barring a horrific collapse.” Since Rapoport’s report, the Browns dropped out of the playoff picture by losing in Arizona, 38-24, and to Baltimore, 31-15, while other necessary outcomes went their way. Whether the Browns are standing by their coach – and Rapoport’s report – may not be known until Monday. Jimmy Haslam has fired four head coaches in his eight years as Browns owner. Two of the firings occurred the night of the final game and two the next day.

Second down: Building a case.

If you don’t think this final game against a 1-14 Bengals team matters, you may be wrong. If the Browns defeat Cincinnati, it would give them a 4-2 record in AFC North games. That would be their best division record since the AFC North was created in 2002. Their second-best division record was 3-2-1 a year ago. The Browns were 2-1 after the coaching change that promoted Kitchens to offensive coordinator. So, Kitchens has had a large hand in winning 5 of 8 division games over the past two seasons. If he wins on Sunday and goes to 6-3, it can be argued that he is making significant progress in a very under-rated part of changing the team culture – that is, to stop being division patsies. The shortest route to making the playoffs is winning your division. If Kitchens somehow has unlocked the key to competing and defeating the division rivals, then that shouldn’t be dismissed.

The Browns have some individual milestones within their reach. Running back Nick Chubb can become the first Brown to lead the NFL in rushing since Leroy Kelly in 1968. Chubb (1,453 yards) is 92 ahead of Carolina’s Christian McCaffrey. He needs 75 yards to pass Jim Brown for the third-highest rushing total in Browns history. Chubb’s 96.9-yard game average already is the highest for any Cleveland back other than Brown. He needs 147 for 1,600 and a 100-yard average. Receiver Jarvis Landry needs nine catches to break the Browns season record of 89 held by Ozzie Newsome and Kellen Winslow. Odell Beckham Jr. needs 46 receiving yards for 1,000, which would make Landry and Beckham the only pair of receivers to break 1,000 in the same season for the Browns.

With the Joe Burrow Era expected to begin when the Bengals make the LSU quarterback and Ohio native the first pick of the 2020 draft, this could be Andy Dalton’s swan song. It’s possible the Bengals would keep Dalton through the last year of his contract as a “bridge quarterback,” but with a $17.5 million 2020 salary, they might be more inclined to trade him for draft assets. If this is it for Dalton, his nine-year career for the Bengals may be better appreciated over time. He holds Bengals records for passing touchdowns (203), completions (2,741), rushing touchdowns (22), career passer rating (87.6), touchdown-to-interception ratio (1.74 to 1) and game-winning drives (24). Against the Browns, Dalton is 11-5 as a starter, with 27 touchdowns v. 13 interceptions and a passer rating of 93.1. Dalton's 69 wins as a starter are second on the Bengals' all-time list to Kenny Anderson's 91.