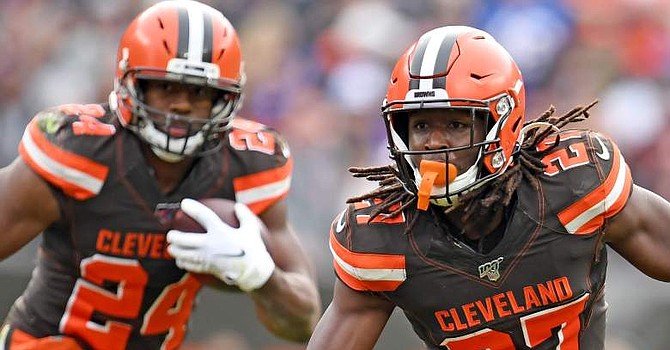 Nick Chubb and Kareem Hunt should be the focal point of the offense next year. (heavy.com)

Securing the NFL rushing crown for Nick Chubb should be Priority One against the No. 32-ranked rush defense in Cincinnati. It would reward Chubb for the best season of Browns back since Jim Brown and set up the offseason as a laboratory for re-imagining the offensive system with Chubb and Kareem Hunt as the focal points.

Boasting two potential 1,000-yard receivers in Jarvis Landry and Odell Beckham Jr. in a non-playoff season should serve as a reminder that NFL championship teams are seldom built through this position. Assuming both return healthy next year, the next architect of the Browns offense – and quarterback -- always will expend wasted energy in trying to please both.

The best you can say about Baker Mayfield’s season is he became the first Browns quarterback to start all 16 games since Tim Couch in 2001. The most damning commentary on his second season was his inability to complete winning or tying fourth-quarter drives against the Rams, Seattle, Denver and Pittsburgh.

David Njoku’s consecutive “healthy scratches” indicate the organization will look to move him through trade and reconstruct the position around combo tight ends who can catch and block. Wouldn’t be surprised if this were an early-round draft priority.

It appears that Wyatt Teller’s extended time at right guard solidified the interior positions. Now the emphasis in the offseason has to be on acquiring new starters at both tackle positions. Greg Robinson probably will be allowed to leave in free agency. With the guarantees in Chris Hubbard’s five-year contract used up, it’s conceivable he could be a cap casualty. Drafting tackles obviously is in the cards, but starting two rookies is out of the question.

Myles Garrett’s suspension has proved how valuable he is when on the field. The pass rush disappeared without him. If Olivier Vernon returns healthy, the need at this position group is for another young pass rusher to join Chad Thomas as productive backups at end. The same is true at tackle in reserve of Sheldon Richardson and Larry Ogunjobi.

It’s inconceivable the Browns would let Joe Schobert walk in free agency, but there is no sign they will stop him. A veteran entering his prime should be an asset worth keeping. There is no evidence Sione Takitaki can fill Schobert’s cleats. Now, Mack Wilson is another story. After ending the last two seasons with injuries, Christian Kirksey’s contract becomes an issue.

There must be something wrong with the scheme for Denzel Ward, Greedy Williams, Terrance Mitchell and T.J. Carrie to combine for only three interceptions. Carrie’s $8.15 million cap number in 2020 could be reason for a change now that his contract guarantees are up.

This was supposed to be the key position in Steve Wilks’ 4-2-5 scheme. But Jermaine Whitehead had to be released after overreacting to his Twitter feed with death threats, Morgan Burnett and Eric Murray were saddled with injuries, and Damarious Randall appeared to save himself for free agency.

Rookie punter Jamie Gillan and Austin Seibert for the most part were pleasant surprises and could be mainstays for the forseeable future. A fearsome return specialist never was developed. Overall, this area was much improved but never took over games.