Odell Beckham Jr. Fuels The Rumor Mill By Being Purposely Vague About His Future With The Browns 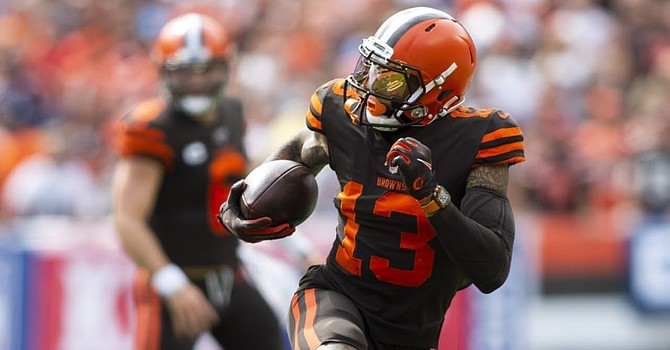 Odell Beckham Jr. declined to stop the inevitable rumors about moving on from the Browns. (Youtube.com)

The most predictable storyline of the NFL offseason will be Odell Beckham Jr.’s future with the Browns.

And in the midst of a rather unsatisfying season, Beckham fueled speculation for any possible scenario in his weekly media chat session on Thursday.

Asked point-blank if he wants to be back with the Browns next year, Beckham no doubt lit up the rumor mill with his response:

“No one knows what the future holds, like tomorrow. My locker is right beside one of the men [Jarvis Landry] who means the most to me in the world. I think about coming to work and seeing him every single day and how special this could be, so I couldn’t sit here and tell you whether I’m gonna be here, want to be here, don’t want to be here. This is exactly where I’m at now and I wouldn’t rather be anywhere else.

“God has a plan. And in the offseason everything will figure itself out. I figure I’ve been here before answering questions about the next team while I’m on a team already. It’s something I tune out right now. Catch me in the offseason. We’ll see what happens. I don’t know God’s plans. I just follow His lead.”

For the record, Beckham is in the first of a five-year contract through 2023.

Trading Beckham after this season would result in a minimal salary cap hit of $2.75 million, which is the portion of his 2020 salary that is fully guaranteed, per spotrac.com. The remainder of Beckham’s 2020 salary -- $11.25 million – becomes guaranteed on March 20.

Beckham repeatedly has said 2020 “is going to be my year,” which may or may not coincide with the window in his contract.

“I’m not really worried about so much about what’s going to happen in the future, but my mindset is no matter what is going on, nothing’s going to be in my way,” he said.

“We’ll see when it happens next year. Honestly, what’s the future hold? I don’t know that. Right now, I’m just taking it a day at a time, trying to finish the season healthy, trying to win these last four games and see what happens.”