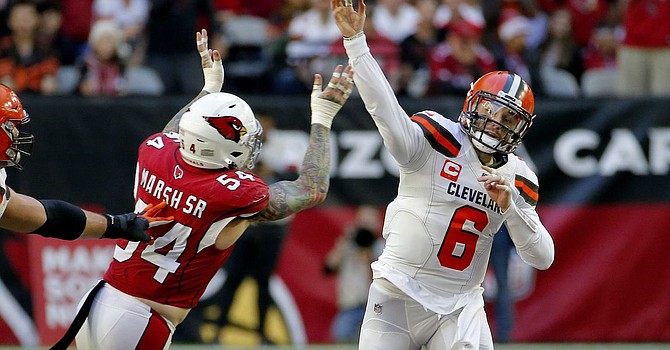 Baker Mayfield and the Browns fall in Arizona as defense gives up 38 to Kyler Murray-led Cardinals. (Cleveland19)

1. Getting hot in the desert: Freddie Kitchens’ job security is back on the hot burner after the Browns lost another game to an inferior roster. Rookie coach Kliff Kingsbury outcoached Kitchens and Kyler Murray outplayed Baker Mayfield as the Cardinals (4-9-1) broke a six-game losing with a 38-24 rout. Yes, it was a rout. The Cardinals practically conceded a touchdown in the last two minutes when they played soft coverage and Mayfield went 91 yards in 19 plays and threw from 1 yard to Ricky Seals-Jones. It was not a great day, either, for defensive coordinator Steve Wilks, whose return to Arizona after a one-and-done season as Cardinals head coach was a disaster. Murray was 19 of 25 passing for 219 yards and one touchdown and ran for another 58 yards. Kenyon Drake scored four touchdowns on the ground and rushed for 137 yards. The Browns wasted another potentially great day by Nick Chubb, who had 127 yards and a 33-yard touchdown but was nonetheless underused again. Needing three wins and a prayer to steal the AFC sixth playoff seed, the Browns fell to 6-8 and stood to be formally eliminated from postseason with a Pittsburgh win against Buffalo later Sunday night.

2. And there it is: Kitchens elected to try to a field goal from 45 yards with 12:05 to play and the Browns down by 28-17. The Browns were at fourth-and-2 at the Cardinals’ 25. Austin Seibert had not missed a field goal outside of the Dawg Pound end zone all year. He missed wide left. The Cardinals then put the Browns out of their misery with a 65-yard scoring drive. Kenyon Drake’s 17-yard touchdown run was his fourth of the day.

3. After further review: The Cardinals benefitted hugely from the new rule enabling a coach’s challenge of a non-call on pass interference. An apparent breakup in the end zone on third down by Damarious Randall was challenged by Kliff Kingsbury. There was contact, but Randall did turn for the ball and very few challenges have been successful. Yet, they reversed the call on the field. Kenyon Drake’s 1-yard touchdown, his third of the game, upped the Cardinals lead to 28-17.

4. Terrible first half: The Browns were outplayed and outcoached badly in the first half and trailed, 21-10. Kitchens’ first mistake was deferring the coin toss. Why? Deferring is usually the right thing to do if weather affects one side of the field. The conditions inside StateFarm Stadium were perfect. Why not take the lead and improve your chances of winning by 50 percent? The Cardinals sliced up the Browns’ defense for 90 yards in 10 plays for the first touchdown.

5. Throw, throw, throw: The 7-0 deficit just gave Kitchens reason to throw the ball. Mayfield completed his first four passes for 30 yards. His fifth pass was dropped by Odell Beckham Jr. at the Cardinals’ 11-yard line. After Mayfield connected with Damion Ratley for 21 yards and a first down at the Cardinals’ 20, the incessant throwing caught up with the Browns again. Mayfield’s high pass for Beckham, who was bracketed by two defenders, was intercepted in the end zone by Patrick Peterson.

6. Murray, the video game: Kyler Murray’s second touchdown drive displayed his phenomenal skills but also the Browns’ feeble tackling. On the last play of the first quarter, Murray kept the ball on an RPO play, sprinted around the left edge and then zig-zagged for a 35-yard gain. On the play, four Browns defenders missed or over-ran Murray – Juston Burris, Sheldrick Redwine, Damarious Randall, Mack Wilson – before Denzel Ward brought him down. When the Browns’ pass rush was non-existent, Murray darted a completion of 17 yards to Pharoh Cooper. When the rush was on him, he avoided it and got the ball to tight end Chalres Clay for 18 yards. Kenyon Drake finished it off with his second TD run and a 14-0 Cardinals lead.

7. Think Chubb: Kitchens finally discovered his running game in the second quarter. But first, Mayfield delivered a great throw to Beckham for 17 yards on second-and-15. After another completion, Chubb finished the scoring drive with successive runs of 6, 17, 3 and 33 yards to get the Browns on the board.

8. Squandered chance: The Browns failed to take advantage of a Mack Wilson interception and return to the Cardinals’ 28. How? Kareem Hunt ran for 4 yards and Chubb for 2. On third-and-2 from the Arizona 20, guess what was called? Yes, the ridiculous shovel pass. Jarvis Landry was immediately in trouble and he threw back to Mayfield for a 6-yard loss. The Browns settled for a 44-yard field by Austin Seibert.

9. More bad tackling: Arizona’s third touchdown of the half was started by a short pass to Damiere Byrd that went for 51 yards after he spun out of Joe Schobert’s tackle attempt. Once the Cardinals moved inside the Browns’ 30, Kliff Kingsbury ate up clock with safe runs. Murray finished it off with a beautiful 6-yard fade to tight end Dan Arnold over Redwine.

10. Signs of the times: The Browns are at the point of making interesting decisions each week in their inactive lists, and Sunday’s revelations didn’t disappoint. The big news was making tight end David Njoku a healthy scratch. Njoku’s return after an 11-week layoff last week was unproductive; in fact, coaches decried Njoku for failing to come down with a high pass in the middle of the field on the team’s first possession. It resulted in a fumble, later ruled an interception. The healthy scratch is an indication the Browns may decline to exercise Njoku’s fifth-year option in his rookie contract. That figure is $6 million for a tight end drafted in the second half of the first round and applies only to his fifth season in 2021. The team has to make that decision by a deadline in May – if he’s on their roster at that time. Also, while the Browns did make right tackle Chris Hubbard active, Kendall Lamm was announced as the starter. Lamm received good reviews in starting in place of Hubbard against the Bengals. Lamm left the game in the second half with another knee injury.