A Browns Trade Of Odell Beckham Jr. Would Be Best For All 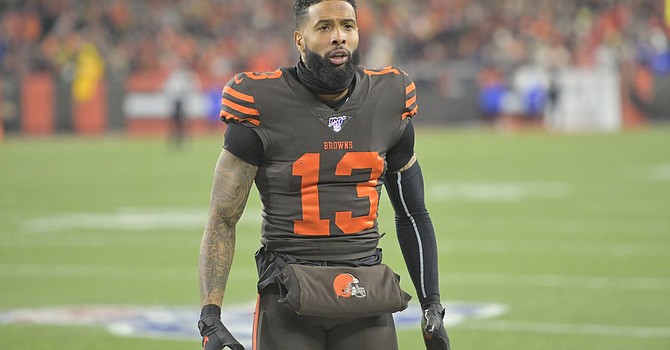 It produced a welcomed positive buzz. It made the Browns relevant in the eyes of league schedule-makers and network executives. It raised expectations for a banner year and sold out the home season. It made Browns fans feel good.

And it has been a colossal failure.

Not a colossal disaster, mind you.

It’s not nearly as bad as the Andre Rison signing by the Browns in 1995.

Beckham’s contract has no salary-cap ramifications that make it overly painful to undo the trade.

And that’s what Dorsey should do – undo it. Cut your losses and move on.

In the offseason, all parties should agree to an amicable parting through trade.

Clearly, it is what Beckham prefers. Two national reporters – Jay Glazer of FOX Sports and Charles Robinson of Yahoo Sports -- now have confirmed from separate sources that Beckham has asked opposing players and coaches to “come get me.” Beckham has declined to address his future other than to say “check with me in the offseason.” Doing so implicitly gives credibility to the reports.

Make no mistake, trading Beckham would be an admission of error. But the Browns should not be stigmatized by that.

Admitting and correcting a mistake as quickly as possible is a sign of organizational maturity. Bill Belichick does it all the time. This year alone, Belichick released Antonio Brown and Josh Gordon when he realized they were not the solution to his team’s offensive problems.

Let’s be clear about one thing: Beckham is not the solution to the Browns’ offensive problems. In my opinion, he is – perhaps unwittingly -- the source of them. Let me explain.

All about OBJ: On the day Beckham was introduced, he was surrounded on the dais in the media room by Myles Garrett, Jarvis Landry and Baker Mayfield.

Mayfield said having Landry and Beckham as his dynamic duo receiving targets “is going to make my job easier.”

In truth, it made his job harder. Much harder.

The team’s obsession with pleasing Beckham and softening the shock of his trade from the New York Giants was evident from the beginning.

He was allowed to report to the team “when mentally ready.” That alone set an unhealthy cultural precedent -- that Beckham would be treated differently than the rest of the team. Several times we heard the line, “He’s Odell.” As if there were team rules for Odell, and team rules for everyone else.

Beckham skipped virtually all of the offseason conditioning program and OTA practices. Yes, they were voluntary. But the fact is, the Browns hoped Beckham would show them the courtesy of participating in at least one practice a week.

Instead, he gallivanted all over the globe, missing valuable time to connect with his new quarterback and new offensive teammates and coaches while learning a new offense in a new environment. Those days had nothing to do with conditioning. It had everything to do with team-building.

Beckham and everyone else said he knows his body better than anyone. Beckham insisted he was preparing his body for the haul of a long season. And yet, he never was totally healthy when training camp commenced. He was held out of most team practice periods and didn’t play a snap in preseason, further undermining the essential task of building chemistry with Mayfield while the new Freddie Kitchens offense was being installed.

They have never caught up to the lost time.

Many of Mayfield’s incompletions and interceptions have come on targets for Beckham. Many times deep into the season Beckham has lined up in the wrong place and had to be waved to the proper spot prior to the snap.

Making Beckham and Landry the focal point of the offense was terribly flawed, in the first place. It fell in line with justifying the bold trade and pleasing Beckham.

It caused the Browns to lose their identity as a run-first team.

Obsessing with getting Beckham the lion’s share of targets heaped unneeded pressure on Mayfield and sapped energy from all involved. A year ago, Mayfield was masterful in distributing the ball to a corps of receivers less talented than Beckham. This year, he openly admitted the team had to force the ball to Beckham. As a result, Mayfield’s growth as an NFL quarterback has been severely stunted.

But the obsession with Beckham gets in the way of committing entirely to Chubb and Hunt.

How to resolve it: Nobody doubts that Beckham’s No. 1 objective is to win.

His reported sports hernia injury looks to be getting worse, reducing his ability to contribute to the cause of winning. He is a proud man and appears to be getting more frustrated that he can’t perform up to his lofty standards.

I say the Browns should shut Beckham down. Do what’s necessary to accelerate the process of healing his injury. That would free the offense to concentrate on its real strength – Chubb and Hunt. That would free Mayfield to distribute the ball evenly without pressure to force it to Beckham.

I believe the dysfunction in the Browns’ offense would magically disappear.

And then Dorsey and Beckham could work together to accommodate a trade in the offseason. Dorsey would not be able to recoup what he gave up for Beckham – a first-round pick and a player (Jabrill Peppers) taken in the first round.

But a trade of Beckham would be the first step in addressing more pressing needs for the team at offensive line, defensive line and tight end.

My hope is that owner Jimmy Haslam would not hold this well-intentioned mistake against Dorsey. It’s a football problem. Let the head of football operations correct it.