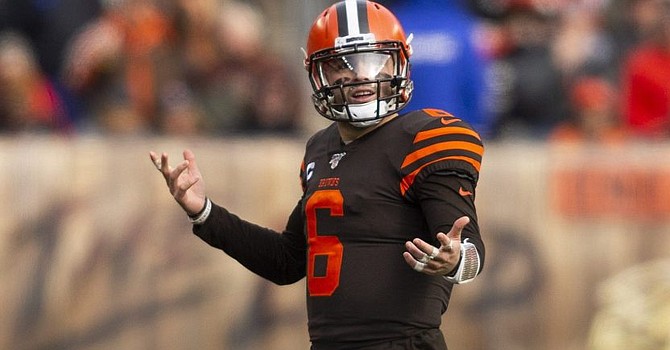 Baker Mayfield took to Twitter to explain his post-game comments about the OBJ injury. (The Comeback)

The day started with two bombshell reports about Odell Beckham Jr. – that he’s been playing through a sports hernia injury that will require surgery, and that he has told opposing players and coaches to “come get me [out of Cleveland].”

It continued with Baker Mayfield throwing the Browns’ medical staff under the bus for mishandling Beckham’s injury and not correcting his problem when it began in training camp.

In between, the Browns beat the Cincinnati Bengals, 27-19 -- thanks to somebody’s realization that Nick Chubb was being woefully underfed -- to keep alive slim, and dwindling, mathematical playoff chances.

They are 6-7 (3-1 in the AFC North) and caught two of the four teams that were ahead of them for the second AFC wild card berth. They are still two games behind Pittsburgh (8-5) and Tennessee (8-5) with three games to play.

Now, back to the Browns’ drama du jour.

On Beckham’s health issue, Ian Rapoport of NFL Network reported in the morning that Beckham’s sports hernia injury – which has been loosely labeled hip and groin injuries on the team’s injury reports each week – would necessitate surgery.

Beckham had two receptions on five targets for 39 yards against the Bengals, marking the fifth game he has been held under five receptions. He was glum after the game and brief in his responses.

“I really don’t run until Friday,” he said of the injury. “I come out here and do what I can. At this point, it is what it is. There is nothing you can really do but finish out the season and try to be 1-0, try to get to these playoffs. Still all of the same goals, regardless of what’s going on.”

Mayfield then poured gasoline on the story when he said the Browns’ medical staff should have taken care of the problem in training camp and Beckham could have been back after two regular-season games.

“Yeah, I’d say it wasn’t handled right,” said the quarterback (11 of 24, 192 yards, two interceptions, 38.9 passer rating). “He’s not able to run as well as he should be able to do as well as he knows. That is frustrating for him. You could sense that somebody’s frustration and where it comes from. It wasn’t handled the right way in our training room. It is what it is. His not 100 percent is still good enough for us.”

Asked if Beckham should have had surgery earlier, Mayfield said, “Yeah, I think looking back, obviously hindsight is 20-20, he probably would have missed the first two, [Games] one and two, just based on the fact that it was during training camp. It is what it is. We’re here right now. It’s too late to do that. He’s fighting through pain, playing through pain. That shows you what type of guy he is.”

Within an hour, Mayfield issued an apology via Twitter.

“My intentions were not to throw our medical staff under the bus. No I don’t know all the facts about Odell’s injury. It was emotionally answered because I can sense his frustration and I care about my team and putting us in the best position to win.

“Those people within our building know my intentions and where I am coming from. I truly believe that and I apologize to those that don’t deserve the backlash.... today was a good team win. On to the next one.”

Yes, the next one … the story from FOX’s Jay Glazer that Beckham definitely wants out of Cleveland and has told players and coaches from other teams “Hey, come get me. Come get me out of here.’”

Beckham said, “I’m not going to talk about any offseason stuff that’s going on. Right now, the focus is to win, go 1-0 and that’s what we did today.”

Asked if he was troubled by the speculation about his future – which began Thursday in his vague responses about where he wanted to play next year – Beckham said, “I’m used to it. I’ve been dealing with it for three or four years. It’s just the same thing that is going on. Not anything that I can’t handle.”

“It continues to be that on the outside. Within our walls, we know exactly what we have, and we have a good relationship where it is very straight to the point. I am not worried about that,” he said.

Mayfield said he has never received the sense from Beckham that he doesn’t want to stay in Cleveland.

The Browns were languishing barely ahead of the 1-12 Bengals at halftime, 14-13, because of two Mayfield interceptions (one was on a deflection off KhaDarel Hodge’s hands, the other was initially scored a David Njoku fumble).

In the locker room, somebody noticed that Chubb – the NFL’s leading rusher – only had three carries for 7 yards and Kareem Hunt had three for 10 yards. The Bengals were ranked 32nd against the run entering the game.

In the second half, Chubb carried 12 times for 99 yards, including a 57-yard run. He finished with a 7.1-yard average on 106 yards, increasing his league-leading season total to 1,281.

“I thought we had some plays there in the pass game,” Coach Freddie Kitchens scoffed when asked why he waited so long to feed Chubb. “The runs I called in the first half went for 2-3 yards. I need more than that. I thought we could lean on them a little bit in the second half.”

The Browns scored their first defensive touchdown of the year on a 61-yard interception return by Denzel Ward, and two clutch field goals by Austin Seibert late, including one of 53 yards. Mayfield (seven yards) and Hunt (three) had touchdown runs.

Mayfield said, “We were the more physical team in the second half. That’s why we came out on top.”

So now the Browns are 6-7 after their fourth straight home game, with three to play. They are left to hope for a myriad of scores to fall their way for somehow rise to the AFC sixth seed.

“I wish we could go back and fix the early stuff,” Mayfield said.

“I think we are realizing that we did it to ourselves to not have the chances this late in the season for playoff percentages. But keeping that big picture mindset, if we finish the way we need to and carry that momentum, kind of how we finished up last year, and having the same guys and keeping stuff similar within the building, it can be important for us.”