Do The Cavaliers Have A Problem Defending The 3-Pointer Or Are They Unlucky? 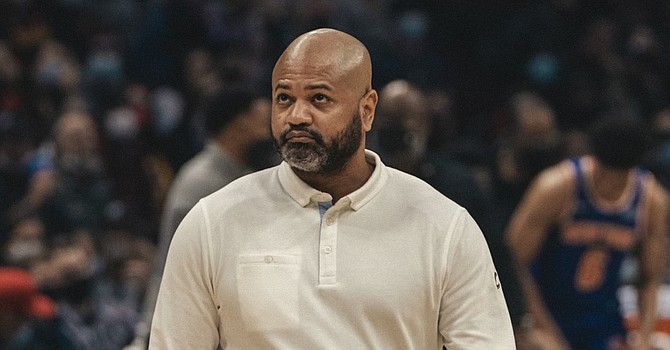 Do the Cavaliers have a problem defending the 3-pointer or are they unlucky?

This season one of the more frustrating areas for the Cleveland Cavaliers has been their defense of opponents shooting 3-pointers. It’s cost them a few games, whether it’s been their fault or the result of bad luck.

Entering Tuesday night’s game in New York, the Cavaliers had allowed opponents to make 15 or more 3-pointers in 11 games this season. Some of those nights are the result of bad defense while others are because the opponents have had a hot shooting night. Either way, the Cavs are just 1-11 in those 12 games, with the sole win coming when the Cavs beat a Dallas Mavericks team that was without Luka Doncic in overtime despite 15 made 3-pointers by the Mavericks.

The nights when opposing teams nail a high number of threes often lead to fan frustration as well as frustration from the coaching staff and inside the locker room. That’s part of the NBA. Sometimes, it just happens.

Poor defense has, at times, led to teams being able to find a rhythm and grow comfortable shooting from outside, leading to tough makes later on in games. This was certainly the case on Friday night when the Golden State Warriors came into Cleveland without their star players and beat Cleveland thanks to 23 made 3-pointers.

But more often than not, is it poor defense that causes the Cavs to allow the occasional 3-point barrage by opponents or is it something that is more the result of bad luck? Do the Cavaliers defend 3-pointers worse than other teams or are they just unlucky? Do the Cavaliers allow too many 3-point attempts to opponents?

Do the Cavaliers allow too many 3-pointers?

As things stand right now, the Cavaliers are allowing opponents to put up 32.2 3-pointers per game and making them at a rate of 37.2 percent. The 32.2 3-point attempts per game is among the lower in the NBA, with just six teams allowing fewer attempts from deep.

That stat leaves the Cavs less susceptible to nights where teams hit a high number of shots from the outside. Even if 15 3-pointers is some arbitrary number, the chances of allowing that many is lower for the Cavs than a team like the Houston Rockets who allow a league-worst 39.2 3-point attempts per game (the Rockets have allowed opponents to make 15 or more 3-pointers in 20 games as of Monday morning).

Where things have gotten challenging for the Cavs is the percentage of 3-pointers made against them. To date, opponents are shooting 37.2 percent from beyond the arc against Cleveland, a number that’s 26th in the NBA. If sometimes it feels as if opponents make more than their fair share of outside shots, it’s because that has been the case. Only four teams allow a higher percentage from beyond the arc, with only one of them (San Antonio) allowing fewer attempts.

Does this mean opponents are getting wide open looks?

Not exactly. According to data from NBA.com, the Cavaliers are allowing 14.7 3-point attempts that are considered to be “wide open*” per game. That may sound like it’s a lot, but it’s actually a third fewest of any team in the NBA. Wide open 3-pointers are going to be part of any game, but the Cavaliers do a relatively good job of eliminating them.

While the Cavs don’t allow an overwhelming amount of wide open looks, their opponents do shoot better than league average on those shots. Teams are shooting 39 percent on wide open 3-point attempts against the Cavs, which ranks 20th in the NBA.

Overall, the Cavs while the Cavs do a good job of eliminating the wide open looks, they’re a bit unlucky at how often other teams are making them.

*NBA.com defines “wide open” as no defender within six feet of the shooter.

What about 3-pointers that aren’t quite as open?

Glad you asked. The next category in terms of how well teams contest opponent 3-pointers is simply termed “open*” and the Cavaliers are allowing opponents to attempt 13.6 of those per game according to NBA.com. They’re a middle of the pack team as far as that goes, allowing the 15th-most in the league. It’s something the Cavaliers certainly could be better at, but it’s not overwhelmingly bad, either.

This is another area where the Cavs do get a bit unlucky. On these attempts, Cavs opponents are making 36.5 percent of their shots, which ranks 25th in the NBA. Of the 15 teams that allow more open 3-pointers than the Cavs per game, only two of them see opponents make shots at a higher clip.

*NBA.com defines “open” attempts as having a defender 4-to-6 feet away from the shooter.

What about the ones the Cavs defend well?

When looking at the open ones, it’s only fair to take a look at the ones the Cavs contest, too. So far this season, the Cavs have allowed 3.9 “tight” 3-pointers per game, which ranks 20th in the NBA. The luck on those shots is relatively even with that number, as teams are making 30.6 percent of those shots, which is 18th in the NBA.

With those numbers, there really isn’t much else to see there.

Where are these shots coming from?

Cavaliers head coach J.B. Bickerstaff isn’t one to overly rely on analytics, but he will admit that the team does use certain numbers to shape which type of shots they’re willing to allow to opponents.

“We obviously want to force teams into tough, contested twos. Keep them out of our paint as best as we possibly can and then challenge everything in the midrange,” Bickerstaff said earlier this month. “Do our best to eliminate corner threes, and if we're going to give up threes, they've gotta be contested, above the break threes.”

That’s an area where the Cavaliers haven’t done as well, which could be part of the problem for them. Entering Tuesday night’s game in New York, the Cavaliers have allowed 8.6 attempts from the corners, which is generally considered to be one of the most efficient shots in the NBA. The Cavs rank 16th in corner 3-point attempts allowed in the NBA.

On those shots, Cavs opponents are shooting 40.7 percent, which ranks 23rd in the NBA. That’s where a significant amount of the 3-point damage is done against the Cavs.

As for the above-the-break 3-pointers, which are considered to be tougher ones in most cases, the Cavaliers don’t allow many. This is how they find themselves allowing fewer total 3-pointers than most teams. They’re allowing the fifth-fewest 3-pointers per game at 23.5 attempts. On those shots, opponents are connecting 35.3 percent of the time which ranks 19th in the league. Considering how few attempts they allow there, that’s a bit unlucky for the Cavs.

Overall, the Cavaliers certainly have nights where the defense on the perimeter isn’t as good as it should be, as every team across the league does. But with the Cavaliers having one of the best defenses in the entire NBA, the 3-point defense might be considered a bit of a weak spot, due to the fact of how good everything else is, but that doesn’t mean they’re bad in that area, either.

Some nights, they’re not good enough, but other times they’re just unlucky.