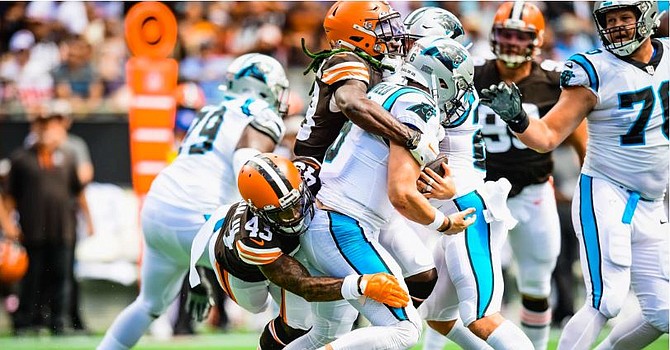 One of the new wrinkles Joe Woods threw at Baker Mayfield was a double-safety blitz, which resulted in this sack. (Cleveland Browns)


2. Are you kidding us?: The Browns’ defense dominated the day except for a few plays – a 50-yard Mayfield-to-Ian Thomas connection, a 28-yard run by Christian McCaffrey after he picked up a dropped snap, and a Mayfield 7-yard touchdown run when a sea of green grass opened in front of him. But the one that really kept the Panthers in the game was a broken coverage on Robbie Anderson. Mayfield spotted it and threw a strike for a 75-yard touchdown. That score revived the crowd, closed the Browns’ lead to 23-21 with 6:02 to play, and tightened the squeeze on the Browns.